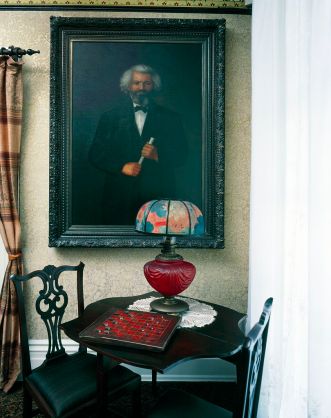 Douglas is a fiery orator, an uncompromising abolitionist and proponent of universal human rights, and even an advocate of using violence if the cause is just, the harms too great, and other means prove ineffective (more on that in an upcoming piece). He criticizes those who ‘shamefully abandon their principles’. And very often, when he encounters discrimination in a hotel, restaurant, or other public place, he reports the incident to the local press.

Yet for all his energetic activism, uncompromising rhetoric, and devotion to principle, Douglass is also a pragmatist, in matters large and small.

To be sure, many of his activist tactics are as idealistic, and plainly appear so, as they are as practical. Douglass’ reports of discrimination, for example, fire up public support for the cause of equal rights by arousing a storm of protest and in turn, raising consciousness and providing examples for use in the political arena.

He’s a pragmatist when it comes to making a living as well: after a decades-long successful career lecturing and publishing, a house fire and an attempt to rescue the Freedman’s Bank from collapse leave Douglass’ finances in disarray. So he takes to the lecture circuit again full time in the 1870’s. In the pre-Civil War era, he makes his living doing what he believes in most: lecturing, debating, and arguing for abolishing slavery and expanding human rights. But in the post-Civil War era, he finds that morals, politics, and rights issues are no longer such profitable topics. So he goes ahead and lectures on the profitable ones, so long as it he can make the talks instructive and wholesome, and link them to more important issues. ‘People want to be amused as well as instructed’ he writes.

He’s a pragmatist when it comes to tactics and the importance of crafting an image. For example, Douglass considers photography a very important, modern tool for engendering mass support through empathy: if people can see and recognize the face of the person behind the ideas, and of one who is a member of a suffering and oppressed people, people will feel the visceral need for change. So, he takes care to become one of the most photographed men in American history.

Douglass’ practicality holds sway in larger issues too. He does not hesitate to change tactics or switch allegiances between organizations or parties if he thinks it would help the cause in the long run. In fact, he is convinced that true, unswerving, uncompromising allegiance to the cause itself requires a reformer to use whatever means necessary, so long as they are not morally wrong, even if they are imperfect or less inspiring or exciting to others than the more uncompromising choice. He has been criticized throughout the years for splitting with the Garrisonians, for siding with Captain John Fremont against Abraham Lincoln in the latter’s recall of Fremont’s emancipation proclamation in Missouri early in the war, for refusing to support or join in on the raid on Harper’s Ferry (though he supports John Brown’s ideas about the validity of armed resistance in general), for evading arrest and possible execution for charges of co-conspiracy in the Harper’s Ferry raid by fleeing to Canada, and for abandoning the Radical Abolitionist Party in favor of the newly formed Republican Party. His critics contend that his practice of often siding with moderate tactics and candidates reveal a lack of commitment and moral courage.

Yet he defends all of these practical choices on the grounds that commitment to the tactics or politics in and of themselves are actually a distraction, since the practice of committing to the ‘pure’ choice in the short run is often an impediment to achieving the ultimate goal in the long run. For example, if he throws his support behind his friend and hero Gerit Smith, uncompromising political candidate of the Radical Abolitionist Party, instead of Abraham Lincoln, the Republican candidate who ran on the more moderate goal of preventing the spread of slavery to the new states, he might be more admired as an uncompromising leader. But he understands what a risky move this would be. The Radical Abolitionists had little chance of winning, but the Republican Party was off to a very successful start, losing its first presidential campaign by a relatively small margin. Since the moderate goals of the Republican Party had a good chance of realization while those of the Radical Abolitionists little to none, Douglass sides with the former. The stakes are simply too high for Douglass to risk losing at this point, even if the risk appears nobler.

In sum, Douglass argues that the truly committed reformer is free to choose the more modest, practical, sure-bet option over the less apparently compromising, more radical option when it appears to be more effective in the long run. That’s because true faithfulness to the mission does not require appearing an effective reformer, it requires actually being as effective as possible. No small part of Douglass’ greatness as an activist and as a person is his willingness to forgo short-term public approval or personal glory in favor of acting in the long-term best interests of his cause. And it appears that history not only validates him as an astute tactician, but as a heroic figure, in part because in hindsight we can more easily recognize the wisdom, integrity, and strength in his pragmatism.