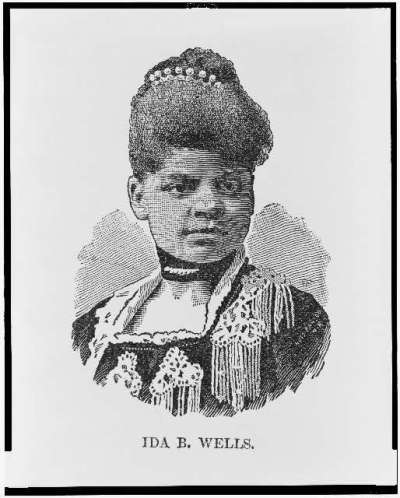 In my recent journey following the life of Frederick Douglass, I was so glad to have the opportunity to visit the place in New York City where he may have first met the great Ida B. Wells. It was late 1892, and this fiery young newspaperwoman had published her very controversial piece of investigative journalism in the New York Age on June 25, 1892. It was expanded and published as a pamphlet later that year as Southern Horrors: Lynch Law in All Its Phases.

Many people at that time thought of lynching as an unfortunate and somewhat rare excess of race-hatred by frustrated Southern whites. And many more saw it as a lawless but not entirely unjustified species of vengeance against black men who had raped white women. But Wells would change all that. In early 1892, three of Wells’ friends were lynched after a dispute between themselves and white owners of a rival business. She was outraged, and began an investigation of the practice and history of lynching as a whole.

When Wells wrote Southern Horrors, she had already been an activist and writer for black rights for many years. In 1884, she resisted being forced out of the first class train car into the ‘colored car’; she later sued the train company, won the first suit, then lost on appeal. This incident (which echoes Douglass’ train protest in 1841) led to many other lawsuits, articles, and activism against anti-black laws and social practices. In 1892, her investigation of lynching revealed to Wells that lynching was far from just vengeance for rape, it was inflicted for petty crimes, supposed insubordination or impertinence, drunkenness, competition, and so on. She discovered that lynchings were not all that rare, either, and came to the conclusion that they consisted a form of social control, a replacement for the terrorism of the slave system.

Douglass was inspired and energized by Wells’ writing and anti-lynching work, and wrote a letter praising Southern Horrors as an introduction. He visited her in New York City where she was living for a little while as a writer for and part owner of the New York Age, which was (probably) published at the site I visited in Harlem. I visited a second site associated with Wells two days after my New York visit: she delivered one of her hard-hitting speeches in her speaking tour following the publication of Southern Horrors at Tremont Temple in Boston on Feb 13th, 1893.

Education was another driving force in her life. Her first job was as a teacher at age 14, and she taught for many years, over time supplementing her teaching with journalism, writing and editing for the Evening Star, The Living Way, and the Free Speech and Headlight. Another of her most controversial, consciousness-raising articles was published in 1891 in the Free Speech about the conditions in black schools: the poor quality of the buildings which housed them, and of the education and morals of the teachers and school boards who administered them. She was not fired outright, but the school refused to hire her for the next school year. She then went on to work full-time for the newspaper, promoting the Free Speech from city to city and writing articles along the way, until the Free Speech‘s offices and printing press were destroyed by angry whites after the publication of her ‘Lynch Law’ piece. Adversity only served to strengthen Wells’ resolve, each attack causing her to re-double her efforts on behalf of her people.

Wells went on to have a long and distinguished career in writing, investigative journalism, and activism for black rights and women’s suffrage. She worked with Frederick Douglass and W.E.B. DuBois, toured the United States and Europe as a speaker and activist, founded Chicago’s Alpha Suffrage Club, served as secretary of the National Afro-American Council, founded and became the first president of the Negro Fellowship League, and helped found the National Association for the Advancement of Colored People (NAACP), among many other things.

For a long time, Wells thought of marriage and romantic relationships as oppressive, where women were expected to defer to men and flatter their vanity. But one day, she met a man who must have made her feel very differently, an attorney, writer, and fellow advocate for black rights named Ferdinand Barnett. She married him and they raised four children.

Please follow the links below to learn more about Ida B. Wells. If I manage to accomplish the tiniest fraction of what she did in my own life, I would consider myself a great success.

‘Ida B. Wells-Barnett‘, episode 25 of the History Chicks podcast by Beckett Graham and Susan Vollenweider.

Wells, Ida. B. Crusade for Justice: The Autobiography of Ida B. Wells. Ed. Alfred Duster. Chicago, University of Chicago Press, 1970.

Wells, Ida. B. Southern Horrors: Lynch Law in All Its Phases, 1892, via Project Gutenberg

Wikipedia contributors. ‘Ida B. Wells‘. In Wikipedia, The Free Encyclopedia.