Frederick Douglass’s Traveling Philosophy series will begin in earnest when I arrive on the East Coast. But behind every Traveling Philosophy series is research, and I have some excellent resources here where I live in Oakland, California. It’s still a little up in the air as when I’ll actually be able to make it to the East Coast for a long enough period to cover the ground I’d like to, since I intend this series to be the most comprehensive I’ve done yet. So, I’ve decided to do something a little different this time, to start the account of my journey with my discoveries and thoughts on the acts and ideas of Douglass I encounter while researching his life.

For the last several weeks, I’ve been gathering materials at my local library branch, the main branch near beautiful Lake Merritt on 14th St. But for many happy afternoons this early December, I’m on the other side of downtown, still on 14th St, in my new favorite study space, the lovely African American Museum and Library in Oakland.

The AAMLO is a local Beaux Arts gem, the original main library building from 1902 until it moved to its current much larger location in the early 1950’s. (See the photo, right, of the museum’s green plaque for a brief history of the library and museum; you can click on the image to enlarge it for ease of reading, if you like.) 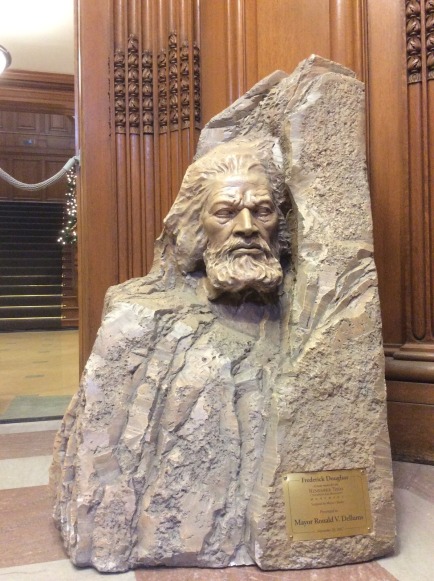 The AAMLO is a new discovery for me this December, and as I enter, I’m greeted, to my delight, with a handsome (if rather stern) sculpture of the hero of my series. It’s this effigy of Douglass, in fact, which inspires me to just jump right in and start his Traveling Philosophy series here in Oakland.

So I’ll begin, as I mentioned, with stories and reflections on his life and work. My trip to the East Coast, tentatively planned for late winter / early spring, and the stories of that journey will be followed by a second series of essays inspired by my discoveries in the course of my travels. I hope you enjoy this new format, and as always, welcome any feedback you wish to offer! 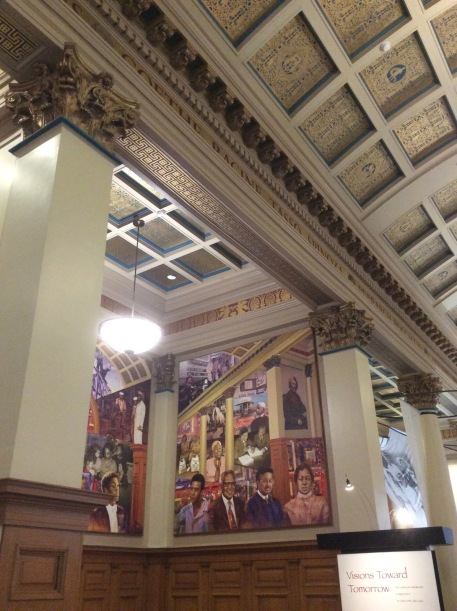 An interior view of AAMLO

AAMLO is a reference library only, so all materials I use must stay here. That’s perfectly fine with me, it’s such a lovely place to work, and lucky for me, it’s quite close by to where I live and work. Since I’ll be returning here a lot, I pick a quiet, cozy corner, and get to work…

One afternoon, after reading and making notes for quite some time, I feel the need to stretch my legs and rest my tired eyes. I go upstairs to the museum, a long gallery which runs the length of the building and which used to be the main reading room.

Crowning the main stairway which leads to this upper gallery, there’s a huge collage of great figures in African American history. It just so happens that the image of Douglass is under the name of Spinoza, among the list of names of great thinkers of the past which embellishes the frieze. Cool. Baruch Spinoza is next on my list of great thinkers to follow, but that’s a story for another time. I’d bet they’d have the most fascinating conversations, though, if they could speak the same language. Though they were very different in their histories, their particular beliefs, and their personalities, yet they were both lovers of reason, and they both lived authentically, true to their beliefs, models of intellectual integrity as they refused to obey the unjust rules of the societies they lived in. 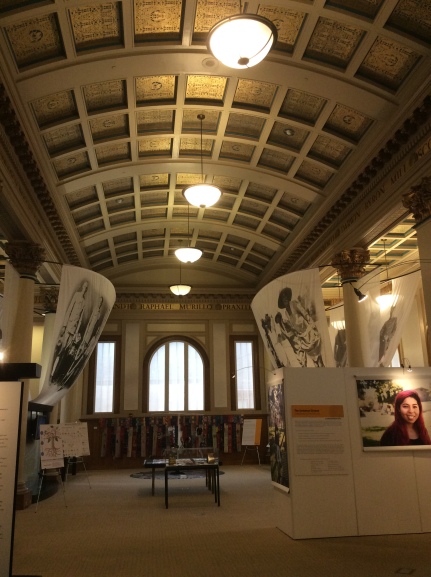 A view of AAMLO’s main gallery on the upper floor

The museum tells the story of the African American people who did so much to make Oakland the vibrant and diverse city it is today, and how America’s legacy of laws and practices both helped and harmed the African American community here and throughout California. The African American community in Oakland grew by leaps and bounds throughout the 1900’s, much of it made up of refugees from the Old South, and through hard work, came to make up a significant proportion of its thriving middle class. Oakland’s economy centered around its busy port and manufactures, and as the work dried up after the stock market crash of 1929, it was no surprise that the economic woes hit African Americans the hardest: when jobs become more scarce, it was not the favored demographics that suffer from it most, as you may expect: Oakland’s working black population lost well over a third of their jobs.

Douglass himself experienced job discrimination in his time working on the Maryland docks as a caulker, hired out as a wage earner in the Baltimore shipyards for his master before he escaped to freedom. In his Narrative, Douglass relates the story of a severe beating he received at the hands of white shipbuilders who resented the competition of low-paid black labor, both slave and free. Douglass was driven from his job by violence; in 20th-century Oakland, it was a combination of job discrimination, rules and laws which prevented black people from joining or forming unions, and differential treatment by law enforcement. Not everything had changed since Douglass’s day. 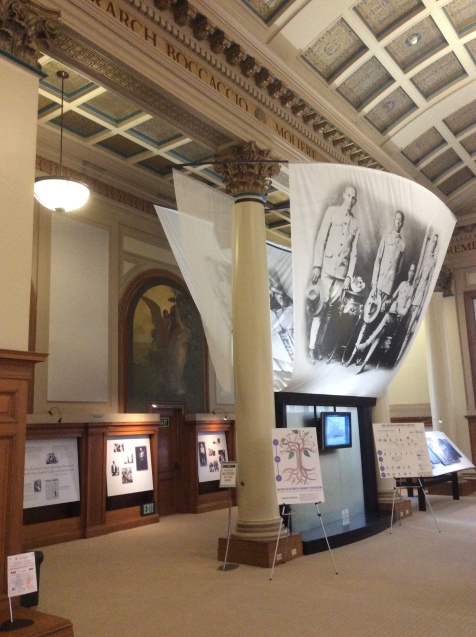 A view of an exhibit in AAMLO’s main gallery

So as black Oaklanders suffered many of the worst effects of the economic downturn, the ills of poverty hit black communities the hardest, and harsh, unjust policing practices and drug policies exacerbated the problems that they may have been meant to alleviate. Many, however, passionately believe that there was no honest intent to help, just to oppress and destroy the black community. Whatever the case may be, the desperation of so many of Oakland’s black people makes it no wonder that the Black Panther Party was founded here in Oakland in the 1960’s. Then as now, a strong cultural tradition of racial justice activism and civic unrest flourished, sometimes, as again to be expected in an environment where so many felt disenfranchised and disrespected, to excess.

If he were alive to witness it, Douglass may have disapproved of many of the Black Panther Party’s militant tactics, but like the B.P.P. and Malcolm X after him, he came to believe that some kind of armed resistance may be necessary to achieve liberty and full equality for black people, and that if violent resistance was necessary to change the laws, it was just, given the depth of oppression and injustice black people suffered. He was, for example, an admirer of John Brown, a passionate abolitionist who unsuccessfully tried to start an armed slave rebellion and was hanged for treason as a result.

* Follow in the footsteps of Frederick Douglass with me…

Douglass, Frederick. Narrative of the Life of Frederick Douglass. Originally published in Boston by the Anti-Slavery Office, May 1st, 1845.