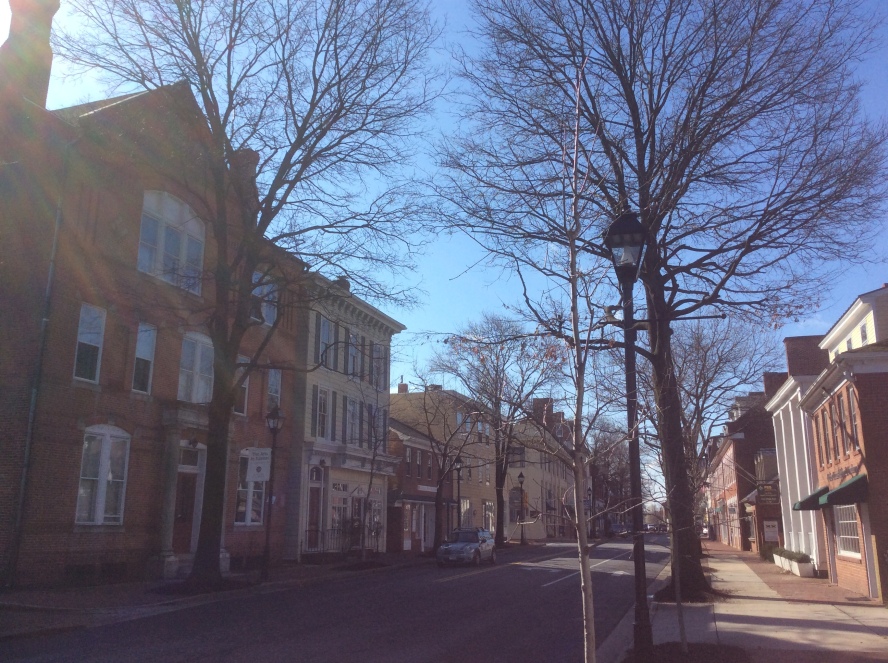 Easton, MD on a bright spring morning in March 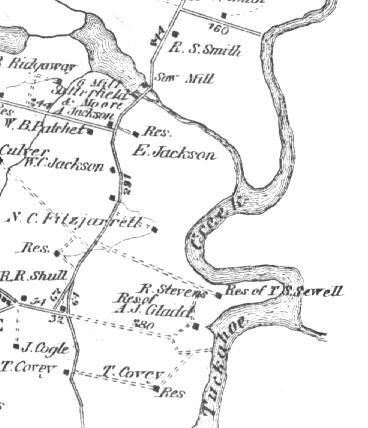 I wake up early and make my way to Maryland’s east shore, looking forward to a beautiful day in the country. It’s windy and very cold, but clear and sunny. I head for downtown Easton: the route from there to my first destination is easiest to follow for a non-local like me. And I can use all the help I can get: this will be the first site I visit in any of my history travels where I will rely both on maps that predate the turn of the 20th century and natural landmarks to locate it.

Just a few blocks into downtown Easton, I turn left on highway 328, which is Goldsborough Street where it starts /ends at Washington Street (Highway 565) in Easton, running only east from here. After about 7 or 8 miles, I turn left onto Lewiston Road. 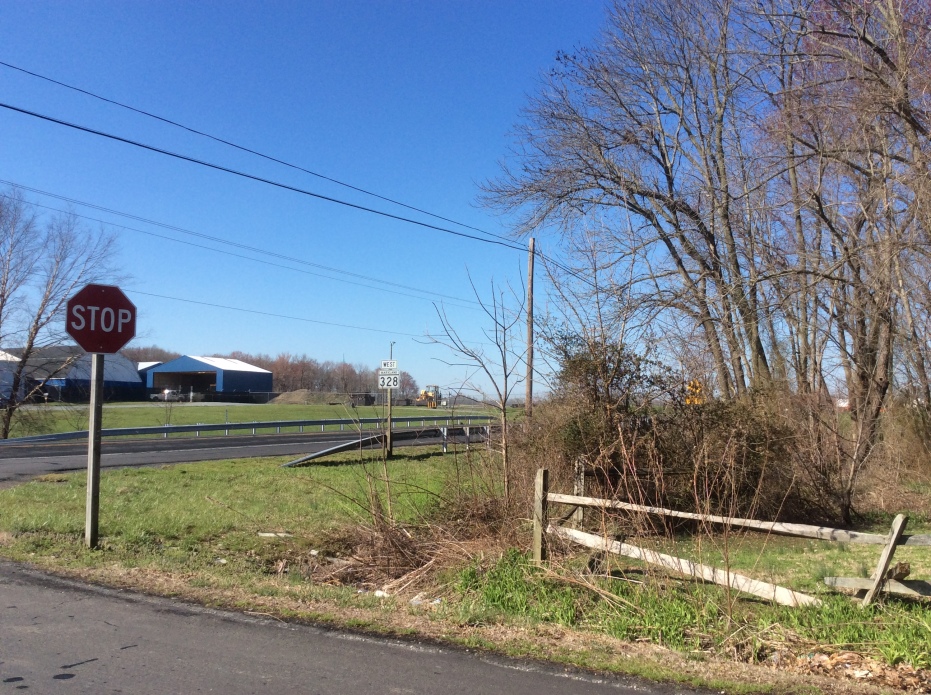 Looking back on Highway 328 from Lewiston Rd, Easton MD

I decide it would be a good idea to check with local people before I start looking for the next landmark, a crossroads called Tapper’s Corner: generally, it’s best to confer with the experts when you want to do something right. The lady I ask at the business at the corner, Bullock Construction, says go 2 or 3 miles, but the lady who gave me directions from the porch of her home down the street says go further. She lives right here, so I go with her recommendation. 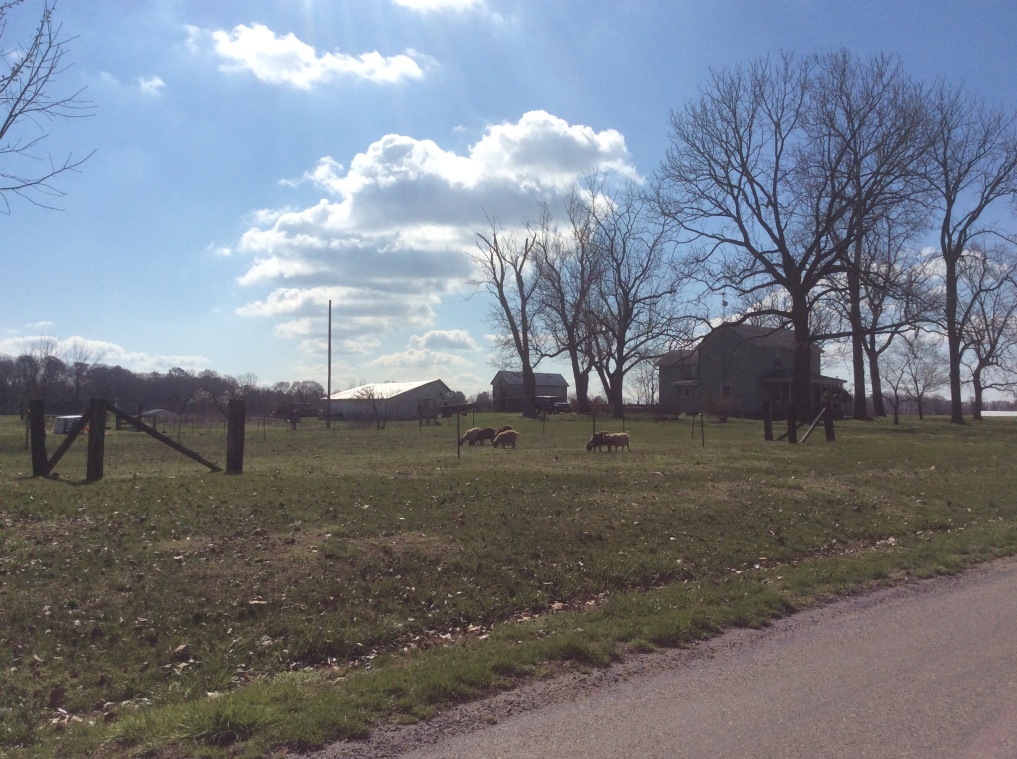 It ends up about 5 (oh so pretty) miles to Tapper’s Corner Rd, also know as Highway 303, a road that t-bones off Lewiston to my left. 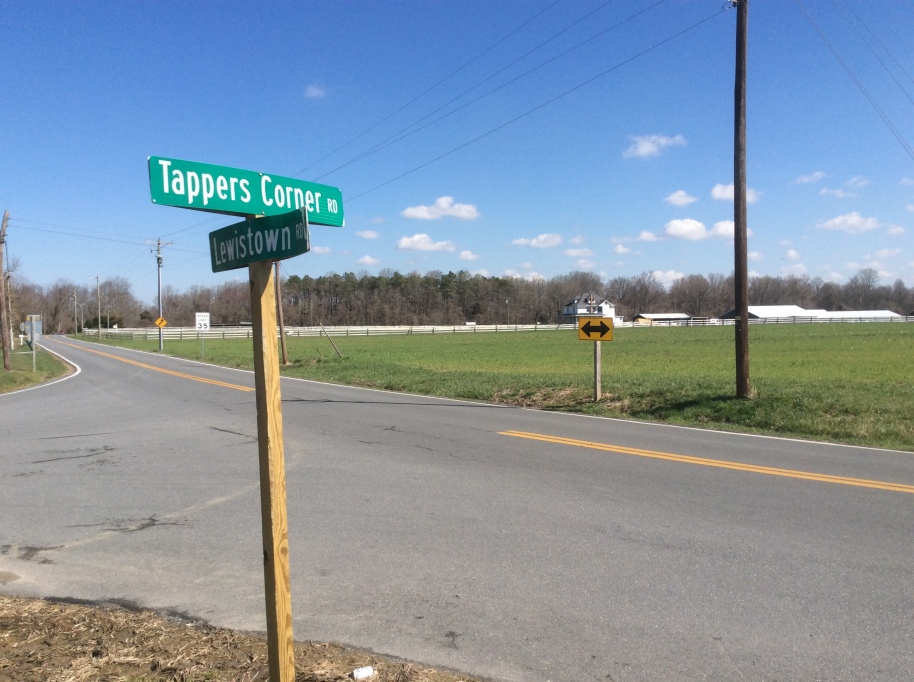 At my right I see, facing forward toward Queen Anne’s County, a big white house with white roofed green barns. According to my sources, this is the site of Aaron Anthony’s old Holme Hill Farm. 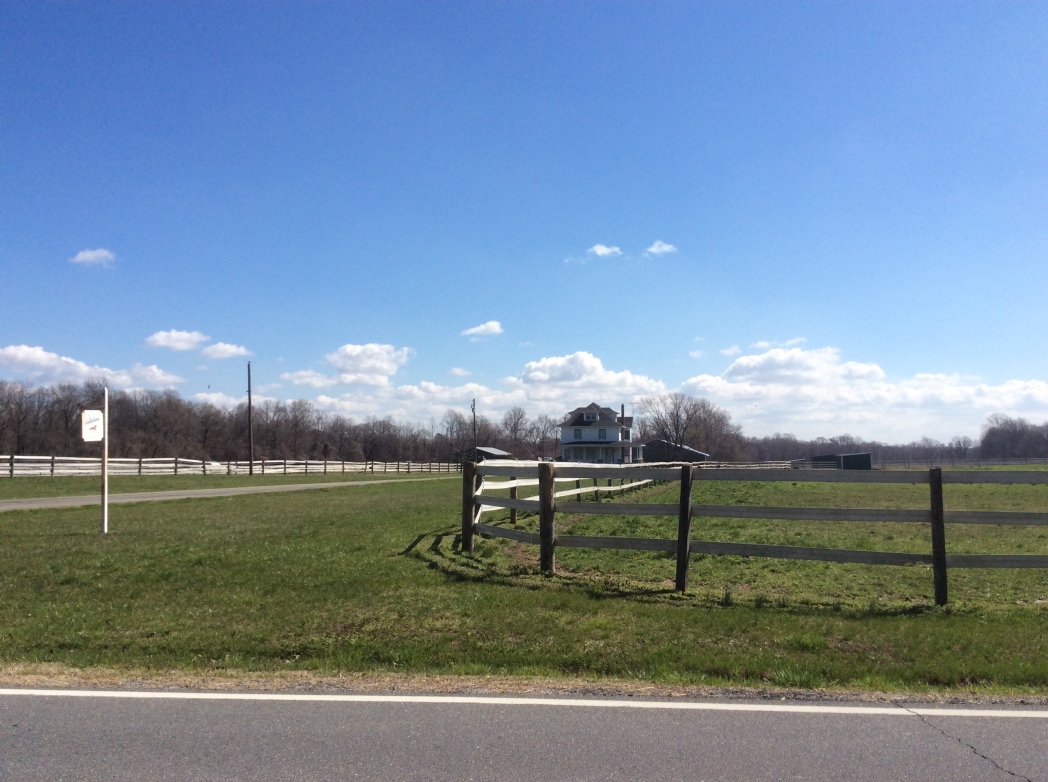 To my right and a little behind me, in the big green field with the trees behind it lining the Tuckahoe creek, is where Douglass was born in 1818, in a little long-vanished cabin. It was called Aunt Bettie’s lot, located between the road, a little ravine called Kentucky, and the Anthony farm, behind which runs the little mill stream into the pond where little Frederick went fishing. 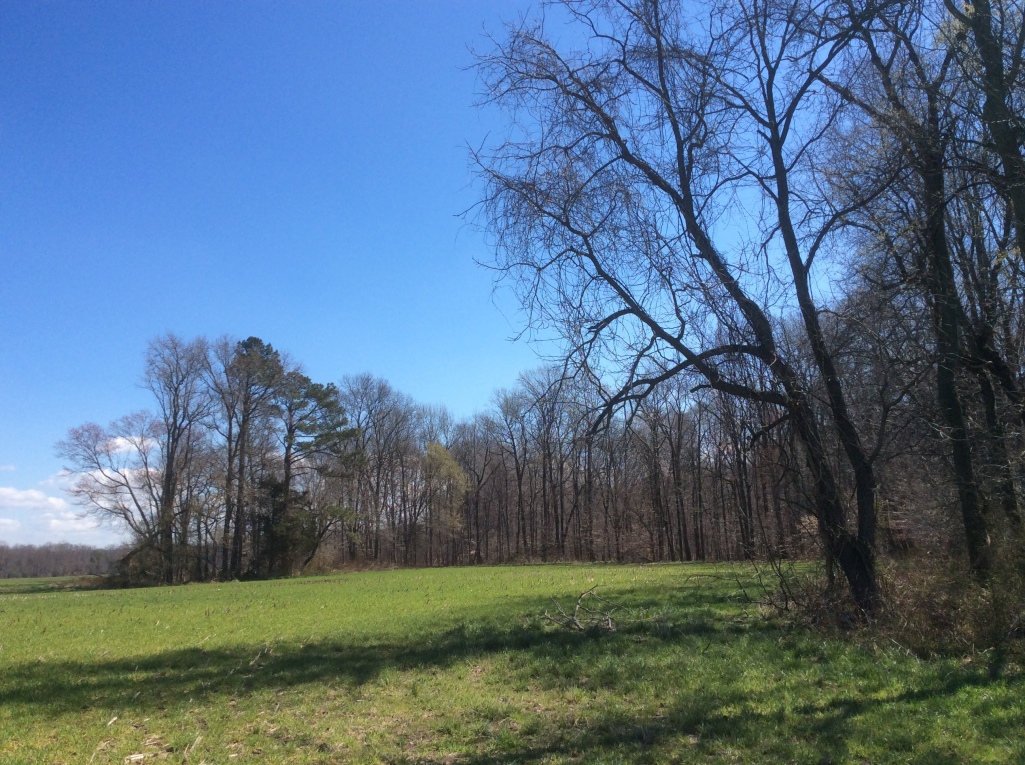 Ravine, woods, and field at Frederick Douglass’s birthplace between Tapper’s Corner and the Tuckahoe

I want to stand on the very spot where the cabin stood, as near as I can determine it to be. I turn around, go back and park along the road at the lone little pull-out spot available on that side. The rest of the road is has a drainage ditch running the full length on either side. The little pull-out area at the side of the road is a little clue that there’s something special here: it’s at the same field where the cabin was and the ravine is. I cross the big green field, a plowed-under grassy cornfield, toward the ravine. I follow where it veers to the left, towards the one green tree among the gray winter branches along the curving ravine. When Douglass returned in 1878 to find his birthplace, he looked for a big cedar tree that he remembered from his childhood ‘a little deeper in the woods, near the edge of the ravine’. I draw closer to the green and discover it’s actually three trees: two pines and another tree, tucked in among the pines and other trees, shorter than them with darker needles. I jump up and pull off a little chunk of greenery: yes, it’s cedar. I get a chill. 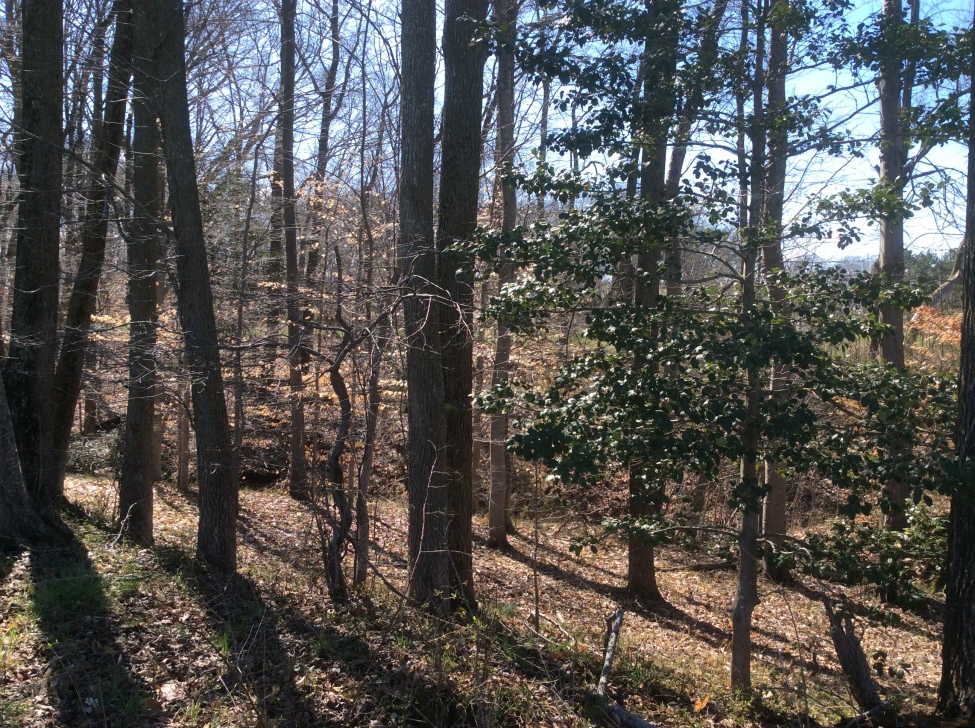 The woods along Kentucky Ravine next to Frederick Douglass’ birthplace

Perhaps it’s the very same cedar tree that led Douglass, or perhaps, it’s an offspring of that tree. It seems too much of a coincidence that there would be one lone but unrelated cedar tree right here by the ravine as he described. Either way, I feel very emotional, very moved. I tend to develop a sense of love and concern for the people whose lives I follow and am solicitous of their memory, and these mementos of their lives help bring their stories closer to me. I hope this account makes you feel the same, and will help you more easily make this same pilgrimage one day.

*Listen to the podcast version here or on iTunes

~ Ordinary Philosophy and its Traveling Philosophy / History of Ideas series is a labor of love and is ad-free, entirely supported by patrons and readers like you. Please offer your support today!

Note: A wonderful source for finding Frederick Douglass’ birthplace, complete with maps and her research process, is my youngest yet: the author, Amanda Barker, did this research project and report in the 1990’s for her 7th grade honors class. Wherever you are, thank you, Amanda!

‘Holmes Hill Farm‘. Sankofa’s Slavery Data Collection, at Rootsweb.ancestry.com (Sankofa is an avatar of Dr. David Anderson of Nazareth College in Rochester, this may be coincidental)