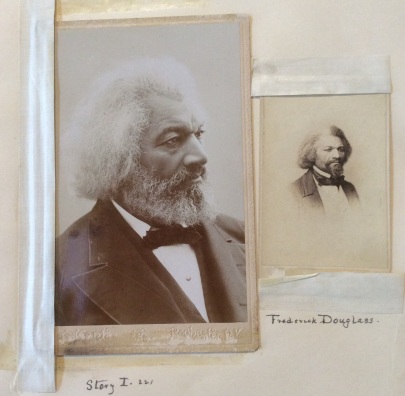 Two portraits of Frederick Douglass from the Hutchinson Family scrapbook at the Lynn Historical Society & Museum, photo by Amy Cools

I’m particularly excited to share this new episode of In Our Time because it’s on a subject particularly dear to my heart and stimulating to my mind: the life and ideas of the great human rights advocate Frederick Douglass. Born a slave in Maryland in 1818, his story as a self-made man starts with refusal: refusal of enforced ignorance; refusal to be cowed and beaten; refusal to stay in a situation where anyone claimed a right to own his person; refusal to stay silent about abuses against his fellow black humanity and against women, immigrants, and the poor; refusal to allow white abolitionists to tell him what to believe and how to present himself. In sum, Douglass refused to be anything other than or less than what he believed he could and should be.

Douglass went on to have one of the most impressive, distinguished, thoughtful, and dogged careers fighting for the rights of everyone that he perceived suffering under the worst excesses of human greed, bigotry, and moral passivity. He did so with passion and exceptional oratorial skill. All in all, I find Douglass to be one of the most memorable and inspiring human beings to ever have lived.

In their discussion on Douglass, Melvyn Bragg and his guests Karen Salt,  Nicholas Guyatt, and Celeste-Marie Bernier, the University of Edinburgh’s own Professor of Black Studies in the English Department with fill you in on many fascinating details about his life, work, and thought. I’m pleased and excited to say that Professor Bernier has recently invited me to join her in-progress project Our Bondage and Our Freedom in celebration of the bicentennial of Douglass’ birth.

An update on my own work on Douglass: my Master’s degree studies are keeping me so occupied at the moment that I barely have time for my other research, let alone time to write it all up. At the moment, my Douglass research is taking me to the Special Collections of the Theological School Library, at the New College of the University of Edinburgh. I’m reading through Thomas Chalmers’ papers and other documents pertaining to the ‘Send Back the Money!’ campaign and the Scottish abolitionist movement. So fascinating, and I look forward very much to sharing what I find with you!

4 thoughts on “O.P. Recommends: Frederick Douglass at In Our Time by BBC Radio 4 with Melvin Bragg and Guests”