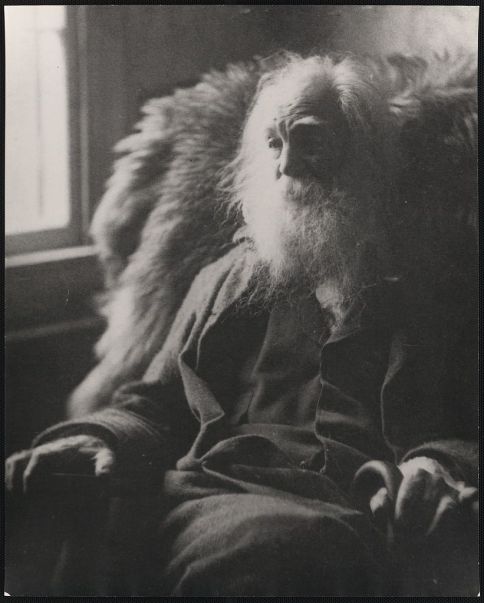 Walt Whitman in 1891. He had long suffered frail health following a severe stroke in 1873, finally dying in March of 1892 of pneumonia. Nevertheless, he continued to write and enjoy the company of many friends and admirers throughout most of those years. This portrait was taken sometime during the year after Robert Ingersoll paid him tribute with his address ‘Liberty in Literature.’ Photo public domain via the Library of Congress

In the first part of my Peoria account, I promised to write more about the friendship between Robert G. Ingersoll and Walt Whitman in the next installment. But the more I read, the more I wanted to know about the relationship between these two people I admire very much. So, I decided to explore this topic a little further in its own piece. Please excuse my tardiness!

‘Let us put wreaths on the brows of the living.’ – preface line to Robert Ingersoll’s tribute to Walt Whitman Liberty in Literature, 1890

In 1890, Ingersoll read his moving, eloquent and sometimes florid Liberty in Literature testimonial to Whitman as he shared the stage with that aging, frail poet, who listened tranquilly and said little except at the end in thanks. On this day, Ingersoll described in detail the myriad reasons for admiring Whitman which he’d later outline in the more succinct and very beautiful eulogy he wrote for the poet two years later.

The great egoist who Ingersoll extolled on this day was also a great humanitarian, a friend and intimate of everyone from the most humble to the most famous, whose friends and admirers included Mark Twain, Paulina Wright Davis, Oscar Wilde, Ralph Waldo Emerson (the first to write him a letter in praise of his poetry), and Ingersoll. Yet Whitman who regularly lived in poverty throughout his life, often with friends of as little means as he himself had. He also volunteered to do the filthy, bloody, backbreaking, sorrowful labor of a nurse during the Civil War. In his maturity, especially, the egoist and humanitarian sides of himself appeared to have reached a well-developed and harmonious balance, reflecting his philosophy that all human beings are equally valuable, equally fragile, and equally godlike, including one’s self.

Whitman’s life was centered around what Ingersoll admiringly referred to as the ‘religion of the body’, which, as I understand it from Whitman’s own work as well as from Ingersoll’s description of it, includes the belief that the human body is a sacred thing rather than a source of corruption as most religious orthodoxies held; that human physical love is likewise sacred and beautiful, akin to a sacrament; that the humble and the great, the sinner and the saint, all share in the same humanity and are all deserving of the same compassion and respect. Ingersoll’s favorite line of Whitman’s, ‘Not till the sun excludes you do I exclude you,’ from his poem To a Common Prostitute, perfectly sums up the ethics of Whitman’s religion of the body. 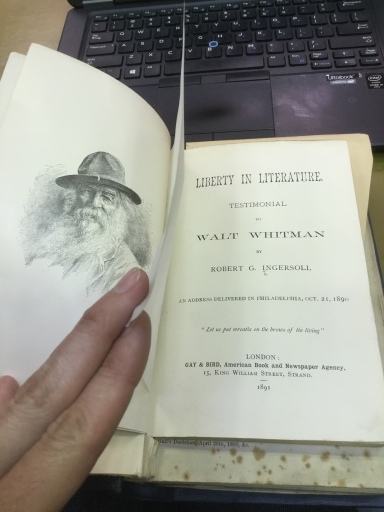 Whitman was religious in an earthily mystical, entirely non-denominational sense. Ingersoll describedWhitman’s religiosity in the eulogy he wrote for him in 1892: ‘…He accepted and absorbed all theories, all creeds, all religions, and believed in none. His philosophy was a sky that embraced all clouds and accounted for all clouds. He had a philosophy and a religion of his own, broader, as he believed—and as I believe—than others. He accepted all, he understood all, and he was above all.’ Ingersoll and Whitman disagreed about religion, but this did not impact their friendship and respect for one another in any negative way. Ingersoll, famed for his agnosticism, thought that Whitman was mistaken to believe in any sort of god. Yet, it seems, Ingersoll respected Whitman’s impulse to believe because it originated from and was of a kind that reflected ‘his elemental quality–his sun-burnt philosophy–his appalling candor–his nude naturalness–his kinship with nature in all her charms–his perfect courage and above all, his sympathy!’ Whitman’s peculiar religion was also free of doctrine or of any ethical imperatives other than those which would accord with Ingersoll’s own creed ‘Happiness is the only good. The place to be happy is here. The time to be happy is now. The way to be happy is to make others so.’

Ingersoll’ eulogy to Whitman ends with the words ‘I loved him living, and I love him still.’ Whitman wholeheartedly reciprocated this feeling. He described his reasons for admiring Ingersoll in terms as least as fulsome as Ingersoll used to describe his own admiration for Whitman: ‘Damn if I don’t think the Colonel is always magnificent! There was always something ample, sufficient, about Bob’s ways and means: he always seemed big enough to go as high and as deep and as far around as anybody… inevitably, tremendously, yet almost lethargically forceful, like a law of nature.’ To Whitman, the inner qualities of his friend found expression in his large frame as well as in his well-chosen and compellingly delivered words, which Whitman compared to those of ‘a master of fence: his strokes are not only infallible but virile.’ He continues: ‘He contains no malice, no poison, but is vehement, aggressive, even overwhelming; not impetuous… but searching, calm; he batters down the opposition like some irresistible wind-blow–like the sea when it comes piling in flooding everything.’

Liberty in Literature testament to Walt Whitman, Truth Seeker Co.’s pamphlet cover, 1890, in the collection of the National Library of Scotland.

Whitman’s praise of Ingersoll, not surprisingly, incorporates suggestions of a physical appreciation as well as an intellectual and spiritual one. To Whitman, this was not mere prurience: the body, as sacred thing, was a proper object of appreciation and admiration. It appears that, to Whitman, it could also serve as much of a window to the soul as a person’s eyes, and smile, and deeds, and words. We are now well acquainted with the importance of body language in communication; Whitman goes further and finds that important elements of the human character are expressed in the very lines of the body. (I’ve recognized a similar theme in W.E.B. DuBois’s praise of black female beauty and the superior virtues expressed in that array of physical characteristics over what he perceived as the comparatively angular and pallid characteristics of white beauty.) Whitman’s admiration for (perhaps even crush on, based on his language) Ingersoll is well-rounded (pun intended) because for him, the spiritual and the physical are all equally important manifestations of the whole human person, and all must be included in order to really understand and appreciate anyone. This goes back, again, to Whitman’s religion of the body.

At the time Ingersoll delivered his tribute to Whitman two years before his death, it was the Gilded Age which, no doubt, made another particular selection from one of Whitman’s poems, Song for Occupations, stand out for Ingersoll as it does for me. The poem is another celebration of humanity; in this case, of workers particularly, and points out that it’s humanity and not the produce of their labor of which the true treasure of the earth consists. Ingersoll prefaced his reading of that selection in his Liberty in Literature address:

‘In this age of greed when houses and lands, and stocks and bonds, outrank human life; when gold is of more value than blood, these words should be read by all,’

and then offered Whitman’s lines:

‘When the psalm sings instead of the singer,

When the script preaches instead of the preacher,

When the pulpit descends and goes instead of the carver that carved the supporting desk,

When I can touch the body of books by night or day, and when they touch my body back again,

When a university course convinces like a slumbering woman and child convince,

When the minted gold in the vault smiles like the night watchman’s daughter,

When warranty deeds loafe in chairs opposite and are my friendly companions,

I intend to reach them my hand, and make as much of them as I do of men and women like you.’

As are so many of Whitman’s, these are timely words for us, too.

Ingersoll and Whitman had been friends for many years at the time of the latter’s death though they had been admirers of one another for quite some time before they met. Though they only had the opportunity to visit each other occasionally, they wrote to one another regularly. Ingersoll and Whitman also praised one another publicly quite often, and shared a kind of sympathy that only two very public-spirited, unorthodox, liberal-minded, often maligned but also well-loved people can. In short, they were natural friends. These two men, with their humanist convictions, their generous natures, their compelling ways with words, their courage in proclaiming their own unorthodox visions of a truer and better way of perceiving the world and of living in it, and their ability to love and admire one another undiminished by their occasional disagreements over religion, propriety, and other particulars, provide a most beautiful example of how a true and rich friendship can give rise to great ideas and help develop and perfect them over time. May we all enjoy such friendships in our own lives.

‘Walt Whitman.’ Poets.org, website of the Academy of American Poets

2 thoughts on “The Friendship of Robert G. Ingersoll and Walt Whitman”