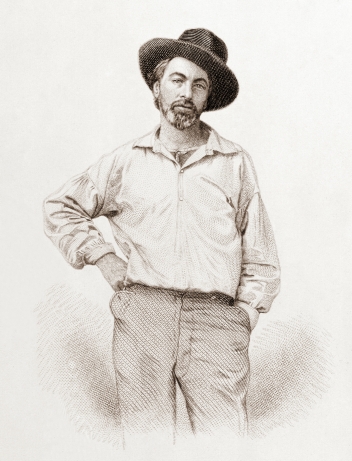 ‘Walt Whitman, an American, one of the roughs, a kosmos, Disorderly fleshy and sensual . . . . eating drinking and breeding, No sentimentalist . . . . no stander above men and women or apart from them . . . . no more modest than immodest.’ Thus Walt Whitman introduces himself to us for the first time in his first self-published 1855 edition of Leaves of Grass. Not on the cover or on the title page, mind you, but deep within the body of the untitled poem later called Song of Myself. If this is a dialing-back attempt to inject a little respectable humility or yet another self-aggrandizing affectation on the part of this unapologetic egoist, it’s hard to say definitely, though I strongly suspect it’s the latter. It certainly is so-very-American.

He was confident, earthy, crude, and vibrant, a self-styled natural man whose personas were nonetheless carefully crafted. He did his own thing and ‘lived the free life of a rover’ (an Eric Bogle phrase from his great anti-war ballad And the Band Played Waltzing Matilda), working odd jobs as a printer, journalist, teacher, and clerk, among other things. Moved by horror and compassion at the magnitude of death and suffering he observed, he worked some years as a nurse to the Civil War wounded, and spent much of his somewhat meager earnings on supplies for their comfort and care. He remained single but had many lovers, probably mostly homosexual, though he praises the physical beauty and power of women as lavishly in his poems as he does those of men. All the while, starting at just over age 30, he began to write his highly idiosyncratic, free verse poetry celebrating the authentic and the crafted self, the human body, democracy, equality, work, nature, and companionship. He spent the rest of his somewhat long life revising and republishing several editions of Leaves of Grass, up to several months before his death at age 72 in 1892.

To read more work by, about, and inspired by the great Walt Whitman, here are some links and articles:

The Walt Whitman Archive, Ed Folsom and Kenneth M. Price, Ed., published by the Center for Digital Research in the Humanities at the University of Nebraska–Lincoln

and just because I love it:

The Body Electric, song and music video by Hooray for the Riff Raff. The song title is inspired by one of Whitman’s most enduring and controversial poems, and is a critique of the tradition of the murder ballad