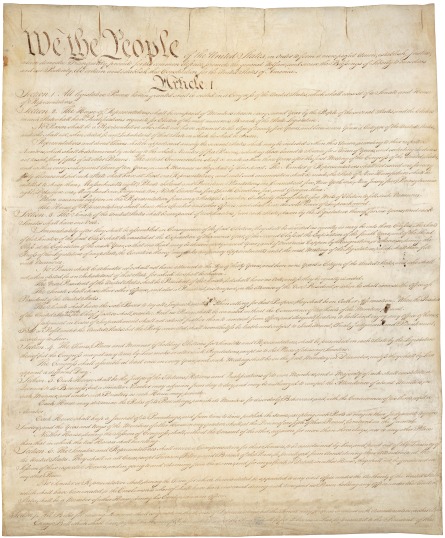 Constitution of the United States, first page of the original, provided by the National Archives and Records Administration, public domain via Wikimedia Commons

I loved the last podcast series that Lillian Cunningham hosted for the Washington Post: Presidential, which ‘explores the character and legacy of each of the American presidents’. This new podcast, Constitutional, also explores the character and legacy of the Constitution, so to speak, and how it came to be. Cunningham speaks with various guests, historians, librarians, politicians, activists, and many more experts about the philosophical underpinnings of the Constitution, what it can and can’t do and the debate over this very question, and how it has been applied throughout United States history.

I’ve just listened to the fifth episode, ‘Gender’, and learned something I feel like a doofus for not knowing: As of March 22nd of this year, the Equal Rights Amendment is only two states away from being ratified by enough of them to become part of the U.S. Constitution. A conservative senator slipped in a 1982 deadline as a tactic to help in its defeat, but it may still become that law of the land. Learn more about the fascinating story here in this wonderful episode, but I recommend starting from the beginning and listening to all of them.