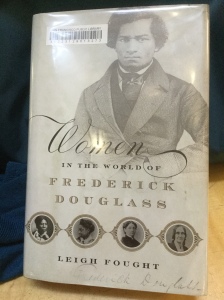 Women in the World of Frederick Douglass by Leigh Fought, at the San Francisco Public Library

I just finished this book about Frederick Douglass by scholar Leigh Fought. I’m at the library right now, about to turn it back in, and have that feeling of afterglow which follows reading a fascinating story while gaining much deeper understanding of a subject that’s long inspired me.

Not only did I get to know the character and work of Douglass much better, his struggles, triumphs, mistakes, virtues, flaws, and motivations, I learned about the ways in which women shaped his life and ideas and made his work possible. I had uncovered pieces of this larger story when following his life and ideas last year, but Fought’s work tells this larger story fully and compellingly and then some. This not only a book about these personalities and how they met, fell in love, collaborated, clashed, helped, betrayed, and so on, but it’s about the real human side behind the various social movements Douglass and the women in his life were a part of. And for many, still a part of, through their memory and influence. It’s about the antislavery movement, the women’s rights movement, the suffrage movements, the worker’s rights movement, the Civil War, the formation of the Republican Party as a free soil, pro-Union party and its after-war (what I consider) devolution into the economy-above-all party, and many other potent movements shaping and reshaping American society.

I very highly recommend this book, and think you’ll love it as I do.