Taoism, to my mind, is one of the world’s most intriguing philosophical and religious traditions. Uniquely Chinese, and yet deeply universal in its message, Taoism, perhaps more than any other mystical system, emphasizes simplicity, mystery, awe, tranquility, spontaneity, and naturalness. (Though Zen Buddhism, as well as Stoicism—granted, not a form of mysticism per se—would give it a run for its money.)

In the past few centuries, growing intrigue in this tradition has brought about a slew of inquiries from spiritually-conflicted Westerners and Orientalist anthropologists, as well as mystics and philosophers then-unfamiliar with, and those still curious about, Taoist and Chinese thought. This includes the general barrage of “big questions” that the world’s religions so often provide answers for: Why am I here? What is my purpose? What happens when I die?

It is this last question—What happens when I die?—that I’d like to focus on here, including, for consideration, the perspective of a very famous—and this is unsurprising—Taoist.

Alongside Laozi—said to be the author of the eponymous Laozi, or Tao Te Ching—there is one other great philosopher who shaped the development of Taoist philosophy: This is Chuang-tzu (or Zhuangzi, as his name is also transliterated), regarded by many as the penultimate thinker or sage in the current of philosophical Taoism. Chuang-tzu’s book, often (as with Laozi) titled after his own name, reads as a series of parables and short stories—many humorous—whereas Laozi’s text is more of a work of verse or creative prose, steeped in obscure symbolism. Either way, the Chuangzu, like its earlier counterpart, touches on both metaphysics and ethics, laying out the way in which action—namely action which is virtuous (de) and “effortless” (wu wei)—follows from a deep understanding of the fundamental nature of oneself and the cosmos, both reifying and stemming from an existence marked by tranquility and happiness. To the individual who has realized the nature of things, being at peace, time and change present no problem. And thus death, an aspect of life so many of us are even wary of discussing, is—as with all things appropriate to nature in its own element—nothing perturbing, and merely a transformation.

On that note, Chuang-tzu’s views on death are perhaps best articulated in a parable concerning his wife’s passing:

The parable, set after the death of Chuang-tzu’s wife, tells us that the sage’s friend, Hui Shih, has come to Chuang-tzu to offer his condolences. To his surprise, Hui Shih—expecting to see a man in mourning—finds Chuang-tzu celebrating by singing and pounding on a tub.

Hui Shih, understandably surprised, asks Chuang-tzu about his apparent dispassion towards his wife’s passing, saying, “You lived with her, she brought up your children and grew old. It should be enough simply not to weep at her death. But pounding on a tub and singing—this is going too far, isn’t it?”

Now she’s going to lie down peacefully in a vast room. If I were to follow after her bawling and sobbing, it would show that I don’t understand anything about fate. So I stopped.” (Zhuangzi, 191-192.)

Chuang-tzu’s reply is consistent with the overall passivity of Taoist thought. In Taoism, emphasis is placed on the acceptance of natural order, and of understanding and living in accordance with the actual nature of things, as opposed to one’s judgments of, or mental impositions upon, the world. (On this note, Chuang-tzu’s “If I were to follow after her bawling and sobbing, it would show that I don’t understand anything about fate,” is sometimes translated as “for me to go about weeping and wailing would be to proclaim myself ignorant of the natural laws.”) Part of this order is the universe’s constant state of flux and, as such, death for Chuang-tzu is more so a transformation than a stopping point—merging, and becoming inseparable from the world, rather than merely dissolving. (The “vast room,” as Chuang-tzu calls it, is sometimes translated as “the great mansion of the universe.”)

Thus we see Chuang-tzu’s exemplification of the Taoist master as an individual who accepts the world on its own terms. The master is also one who, in some manner, observes or experiences the constant principle—the ineffable Tao, or “Way”—which remains behind the mundane state of transience, being its source, essence, and end. Nature (in all its transitions), here represented by the four seasons, performs different operations—albeit indifferently—its cyclical nature a symbol of something greater than mere beginnings and passings away. Hence, aware of the union of the metaphysical and the purely natural, a Taoist sage (zhenren or shengren) is at ease in the world.

Such a perspective seems so simple, and yet pervasive, that one could consider it almost perennial. Another strain of metaphysics in which we observe the wholesale acceptance of change (and a kind of mysterious monism to complement it) is that of the ever-obscure Heraclitus, whose Logos(“Word” or “the Word”) is in certain ways a sort of Western (or Greek) Tao. While Heraclitus in many ways remains as much a legend as, and his sayings even more disorganized than those of, Laozi, the principle of the Logos is the main feature of his philosophy, and provides a parallel to the Tao. To this effect Heraclitus famously states, “This logos holds always but humans always prove unable to understand it, both before hearing it and when they have first heard it. For though all things come to be in accordance with this logos, humans are like the inexperienced… distinguishing each in accordance with its nature and saying how it is.” (Heraclitus, 98.) Chuang-tzu, exemplifying the impartial and natural philosophy of a Taoist sage, shows us how, in understanding the nature of change and death, one follows and lives in accordance with a perennial understanding, not bound by particular traditions, but available through a common reasoning and intuition regarding the operations of the universe. Through such common reasoning, Heraclitus was not far off the mark, if at all.

Heraclitus’s Logos, moreover, implies not only an order to be found in the natural world, but in human action, as well. Humans are, after all, just as much part of the Logos as anything else. (Similarly, in Taoism, a human being is considered a microcosm of the universe, and in Marcus Aurelius’s Stoicism the individual is treated as a subset of “the Whole.”) Thus, on the topic of human conduct, Heraclitus notes, “Speaking with understanding they must hold fast to what is shared by all, as a city holds to its law, and even more firmly. For all human laws are nourished by a divine one. It prevails as it wills and suffices for all and is more than enough.” (Heraclitus, 43.) Heraclitus also delves more deeply, into the constituents of human wellbeing, on which topic he contends that “Thinking well is the greatest excellence: to act and speak what is true, perceiving things according to their nature,” (Heraclitus, 43) and that “Wantonness needs putting out, even more than a house on fire.” Together these passages suggest that wisdom and goodness consist of perceiving things truthfully, as they are, and that one’s acceptance of and contentment with nature leads to real happiness.

Chuang-tzu, as a Taoist, maintains a similar position, though with a twist: The sage’s passivity, part of his deep appreciation for the reality of change—as demonstrated in the parable of his wife’s death—can be understood as an example of the aforementioned wu-wei, or “non-doing.” (Roughly.) Wu-wei implies an action, behavior, or process which is “effortless,” supremely efficient by virtue of avoiding all that is needless. Any obstacle or struggle is rendered a non-concern when one acts in terms of wu-wei—thus in accordance with the Tao. Hence, all the simplest things in life exemplify the principle of wu-wei by virtue of their doing, and doing-with, so little.

As is noted in section 18 of the text of the Zhuangzi, Chuang-tzu says, “I take inaction to be true happiness, but ordinary people think it is a bitter thing. I say: perfect happiness knows no happiness, perfect praise knows no praise. The world can’t decide what is right and what is wrong. And yet inaction can decide this. Perfect happiness, keeping alive—only inaction gets you close to this.

Heaven and earth, primordial elements of the Chinese mythological cosmos, are at ease in their ancient perfection, achieved through nothing and achieving everything without effort. The sage, in seeking to emulate the Tao as it is presented in and by the world, becomes indifferent, as the universe is indifferent, and thus has no trepidations in regards to death. The sage understands that he, and those individuals around him, are merely manifestations of the absolute Way. Thus, what can death be to him who is indifferent toward change, however great or small? Death, for the sage, is merely “the beginning,” and a continuation of the “life” of the cosmos and, indeed, the Tao—the Way.

About the author ~ Ryan V. Stewart is a writer and student from Connecticut. He has been actively writing since 2006, and blogs about everything from mysticism and philosophy to environmental issues, the arts, and personal peeves at The Grand Tangent. He’s interested in the intersection of mysticism, comparative religion, and philosophical analysis (among other things).

~ Ordinary Philosophy and its Traveling Philosophy / History of Ideas series is a labor of love and is ad-free, entirely supported by patrons and readers like you. Please offer your support today! 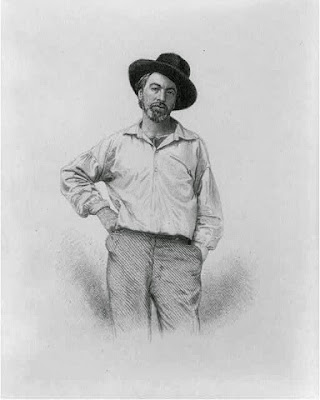 I’ve been revisiting the poems of Walt Whitman lately, listening to them read aloud on Librivox by a skilled reader, enjoying every moment of them in their rich simplicity. This one especially struck me, and I feel compelled to share it with you.

From Song of Myself, Book 3

I think I could turn and live with animals, they are so placid and self-contain’d.
I stand and look at them long and long.
They do not sweat and whine about their condition,
They do not lie awake in the dark and weep for their sins,
They do not make me sick discussing their duty to God,
Not one is dissatisfied, not one is demented with the mania of owning things,
Not one kneels to another, nor to his kind that lived thousands of years ago,
Not one is respectable or unhappy over the whole earth.
So they show their relations to me and I accept them,
They bring me tokens of myself, they evince them plainly in their possession.

You know me, dear readers, as one who enjoys mentally taking apart things to see how the world works, a little too obsessively at times, perhaps. Yet I am an animal too, just one who does that kind of thing. But it’s good to remember to be the kind of animal that just takes in, and enjoys, simply, sometimes