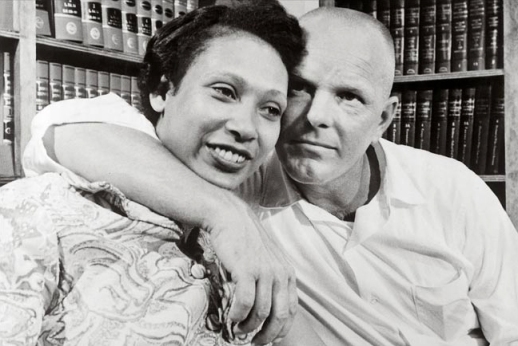 A new film about the Southern working class couple whose love and dedication broke the back of anti-miscegenation laws across the nation arrives just in time. Released days prior to Donald Trump’s election, viewers of Loving might be shocked to discover that anti-racist, blue-collared, white men—like Richard Loving—walked Southern soil. He was brave (or ignorant) enough to think he could get away with marrying a black woman; wise enough to know she was smarter than him. His deferral to her effort to seek legal counsel ultimately overturned laws banning interracial marriage in the landmark Supreme Court decision, Loving v. Virginia (1967)

Beneath the film, the Lovings’ story also speaks to the centuries-long effort by white supremacists to create a “white race” and defend it from “race-mixing”(also called miscegenation). In 1958, Richard Loving, 23, and Mildred Jeter, 17, married in the District of Columbia. They did so because Virginia outlawed interracial marriages, one of twenty-four states with similar laws at the time. Richard was “white,” Mildred “black” though actually a mixture of African American and Rappahannock Indian.

So began their nine-year odyssey that ended with the Court unanimously ruling that states could not prevent a man and a woman from marrying, regardless of their racial identities. Written and directed by Jeff Nichols, critics at Cannes hailed the motion picture and Oscar buzz has begun. The film deserves high praise and wide viewership, anchored by incredible performances from Ruth Negga and Joel Edgerton, the two principal actors.

Despite knowing the law—as proven by their DC marriage—the newlyweds chose to live in Central Point, their rural home in eastern Virginia’s Caroline County. A remote community made up of poor and working class people with a long, complicated history of ethnic and racial mixing, African Americans, European Americans, and Native Americans all lived in Central Point. Tellingly, despite 97% of all births, in 1960, occurring in hospitals, Richard’s mother, a midwife, delivered Mildred’s first child in 1959.

Just weeks after marrying, and prior to Mildred’s delivery, the sheriff arrested and jailed them for “unlawful cohabitation.” According to Mildred, when “they asked Richard who was that woman he was sleeping with,” she responded: “‘I’m his wife,’ and the sheriff said, ‘Not here you’re not.’”

The Lovings had violated Virginia’s Racial Integrity Act of 1924 though laws prohibiting interracial marriage and sex date back to the colonial era. The first “Richard Loving,” as it were, appeared in Virginia court records in 1630: “Hugh Davis [a white man] to be soundly whipped before an assembly of Negroes and others for abusing himself to the dishonor of God and shame of Christians by defiling his body in lying with a Negro; which fault he is to acknowledge next Sabbath day.”

By 1662, though, reality forced Virginia’s House of Burgesses to designate the status of interracial offspring:

WHEREAS some doubts have arisen whether children got by any Englishman upon a Negro woman should be slave or free, Be it therefore enacted and declared by this present grand assembly, that all children borne in this country shall; be held bond or free only according to the condition of the mother.

Virginia’s law dictated, “that which is brought forth follows the womb” or, in Latin, “partus sequitur ventrem.” In other words, a white, male slave-owner could have sex with—quite possibly raping—a black female slave, but their child was considered a slave, like the mother, rather than free, like the father. Previously, Virginia followed English common law, which dictated a father’s status determined a child’s. Virginia first outlawed miscegenation in 1691, as part of “An act for suppressing outlying Slaves.”

Over time, racial barriers further hardened in Virginia, the South, and nation. Before the twentieth century, Virginia considered a person “black” with one-forth African ancestry. In 1910, the state adopted one-sixteenth as its definition. With the Racial Integrity Act of 1924, Virginia embraced the notorious “one-drop” rule, authored in a period of heightened xenophobia and racism. For violating this law, in 1959 Judge Leon M. Bazile of the Caroline County Circuit Court sentenced Richard to prison for a year, but suspended this sentence if the couple agreed to leave Virginia and not return for twenty-five years.

In 1963, following encouragement from a relative inspired by the recent March on Washington for Jobs and Freedom, Mildred wrote Attorney General Robert Kennedy. He forwarded her letter to the American Civil Liberties Union (ACLU), which took the case. Attorneys Bernard S. Cohen and Philip J. Hirschkop, both young Jewish men committed to racial equality, quickly recognized this Loving story could, once and for all, overturn all interracial marriage bans.

In response to their appeal, Judge Bazile wrote: “Almighty God created the races white, black, yellow, malay and red, and he placed them on separate continents. And but for the interference with his arrangement, there would be no cause for such marriage. The fact that he separated the races shows that he did not intend for the races to mix.”

In 1963, the same year Cohen and Hirschkop appealed the Lovings’ punishment, another Virginia court ruled against interracial marriage: “’to preserve the racial integrity of its citizens,’ and to prevent ‘the corruption of blood,’ ‘a mongrel breed of citizens,’ and ‘the obliteration of racial pride’.”

Four years later, Chief Justice Earl Warren profoundly disagreed: “Under our Constitution, the freedom to marry, or not marry, a person of another race resides with the individual and cannot be infringed by the State.” “Odious to a free people,” banning interracial marriage violated the 14th Amendment. Case closed.

Sadly, the Lovings only spent eight more years together after becoming the Supreme Court’s most aptly named case. A drunk driver killed Richard, just 41, in 1975. Mildred died of pneumonia, in 2008, at 68. She never remarried, living the rest of her days in the house her husband, a bricklayer, built for her after changing History.

Given the recent presidential election, it seems impossible to watch Loving and not meditate about the so-called white working class. Two-thirds of whites without a college education—a very imperfect correlation to socio-economic class—voted for Trump. Yet, for most of the twentieth century, such people, particularly Southern whites, voted Democratic. At least in part due to the civil rights revolution, Southern whites overwhelmingly realigned and, largely, took over the Republican Party. In 2016, 72% of registered Republicans still question the Americanness of America’s most famous mixed race citizen, Barack Obama.

Richard Loving rejected white supremacy when he married Mildred—in contrast to legions of white men who “simply” had sex with black women. He, his wife, and their three mixed race children became victims of racism. He became a “race traitor.” White film viewers come to see that, after marrying, Richard essentially joined the black community. They lived with her family, first in Virginia and, later, a racially segregated part of Washington, DC. Except for his mother in Central Point, Richard appeared to have no white friends; he and his best friend, a black man, owned and drag-raced cars. He kept to himself at work—(apparently) all-white construction sites.

A long history of accepting interracial couples and mixed race children exists in the black community, if only because no alternatives seem to exist. James Baldwin laid bare this ugly truth during a televised debate with a white conservative. When asked about what whites feared most, “Would you want your [white] daughter to marry one [black]?” Baldwin retorted, “You’re not worried about me marrying your daughter—you’re worried about me marrying your wife’s daughter. I’ve been marrying your daughter since the days of slavery.”

In a telling scene in the film, Richard drinks with three black friends in a black saloon. One friend pointedly asks Richard how it feels to experience what blacks had suffered from for 350 years: virulent racism. Richard, always taciturn, says nothing but proceeds to get drunk and, later, cry in Mildred’s arms.

Today, the number of interracial couples and families, like the Lovings, remains small. The 2010 U.S. Census reported nine million Americans identified as multiracial. The Pew Research Center noted in 2013, however, “a record-high 12% of newlyweds married someone of a different race.” Yet, apparently many white Americans still fear people like the Lovings and the ongoing demographic changes transforming America into a “majority-minority” nation.

~ This review was originally published on Nov 27th, 2016 in the blog of the African

American Intellectual History Society, and the text and links are here reproduced in full

Peter Cole is a historian of the twentieth-century United States, South Africa and comparative history. Dr. Cole is Professor of History at Western Illinois University. He is the author of Wobblies on the Waterfront: Interracial Unionism in Progressive Era Philadelphia (University of Illinois Press, 2013) and currently at work on a book entitled Dockworker Power: Race, Technology & Unions in Durban and the San Francisco Bay Area. Follow him on Twitter @ProfPeterCole.