I get a very late start resuming my history of ideas adventure today: I greeted my husband Bryan last night in Saint Quentin en Yvellines as he finished Paris-Brest-Paris in excellent time, 1200 kilometers in 53.15 hours! We celebrate his accomplishment and restore his energy by feasting throughout the morning and early afternoon, after he gets some good rest. When I arrive back in Paris, I still have at least three good hours of daylight, so I throw down my overnight bag and head right back out into the street. Although I only have a short time to explore, it turns out to be a very fruitful evening.

Today’s explorations will be conducted in light of some new information I’ve just uncovered. As Bryan slept, I researched, and as I had been discovering new details about the history of the places I visit, the more leads I have. As I enter these new combinations of keywords, I discover this wonderful U.S. State Department paper on the official history of U.S. representatives in France, complete with more detailed location descriptions, including some historical addresses listed alongside the new. It’s the site-identification Rosetta Stone I’ve been looking for, and I discover that three of the places I visited on my second day in Paris have different modern addresses. Today’s mission, then, will be one of rediscovery.

I begin by heading up rue Montmartre over to Boulevard Montmartre, then to rue du Faubourg Saint-Denis, once again in search of the site of the mansion farmhouse Thomas Paine shared with six others from the fall of 1793 to 1794. The State Department paper reveals that while in Paine’s time the address was number 63, it’s now numbered 144, and that the mansion had once belonged to Madame de Pompadour, Louis IV’s official mistress. Unlike the other two sites that I’ll be seeking today, this one is quite far from the original address I sought, because the original rue Saint-Denis of Paine’s time had been lengthened significantly since then.

It’s a beautiful and still warm, and Bd. St-Denis, like Bd. Montmartre, is thronged with people greeting friends, walking their dogs, shopping the produce markets, hawking flowers, and eating and drinking at the cafes, with a few drinking in the street and getting a little rowdy. As I mentioned in my earlier post about this street, it reminds me of the old Mission district in San Francisco, and I love it. The crowd is multiracial, multicultural, rich, poor, and in-between. There are cafes and little food markets offering foods from around the world: Indian, Pakistani, Bangladeshi, and Turkish, to name a few, and the large produce markets, open to the street, offer a colorful array of fruits and vegetables.

As I head farther north and uphill, pretty far past 63 that I visited last time, the neighborhood becomes fancier, the buildings are taller, larger, more ornate, and well-kept. At 144 rue Faubourg Saint-Denis, I find an imposing brick building, beautifully ornamented, but closed off with iron gates. I photograph the outside, then peer into the large courtyard.

Vertical Garden in the Courtyard at 144 Rue Faubourg Saint-Denis

A young man, clearly a local, stops and asks if I need directions, then explains that people can usually get into the courtyard of this building if they need to, and we chat a bit. Then an elderly man, who’s taking keys from his bag approaches the side gate, overhears our conversation and offers to let me inside as long as I make sure to close the gate behind me. I agree, and briefly explain my mission: he’s surprised at the historical details of the place formerly at this site. He smiles at my obvious enjoyment of the beauty I’m pleased to find all around me here, and explains that the lush green wall garden towering over us to our right is the largest in all of Europe. He’s a humble man and won’t consent to have his picture taken or name listed for this piece. I thank him, and he wishes me a good evening.

Though Paine might be pained to find that his happy garden retreat is now built over with towering (though very handsome) apartments and SNCF offices, he may take some comfort at the spectacular green wall.

I exit the back gate of the courtyard and find myself at the side entrance of the Gare du Nord. I go up an inviting stairway that takes me to the street above station level, though it’s not necessarily the most direct route, just ’cause, ya know? In a place such as this, sometimes you just have to meander a bit. 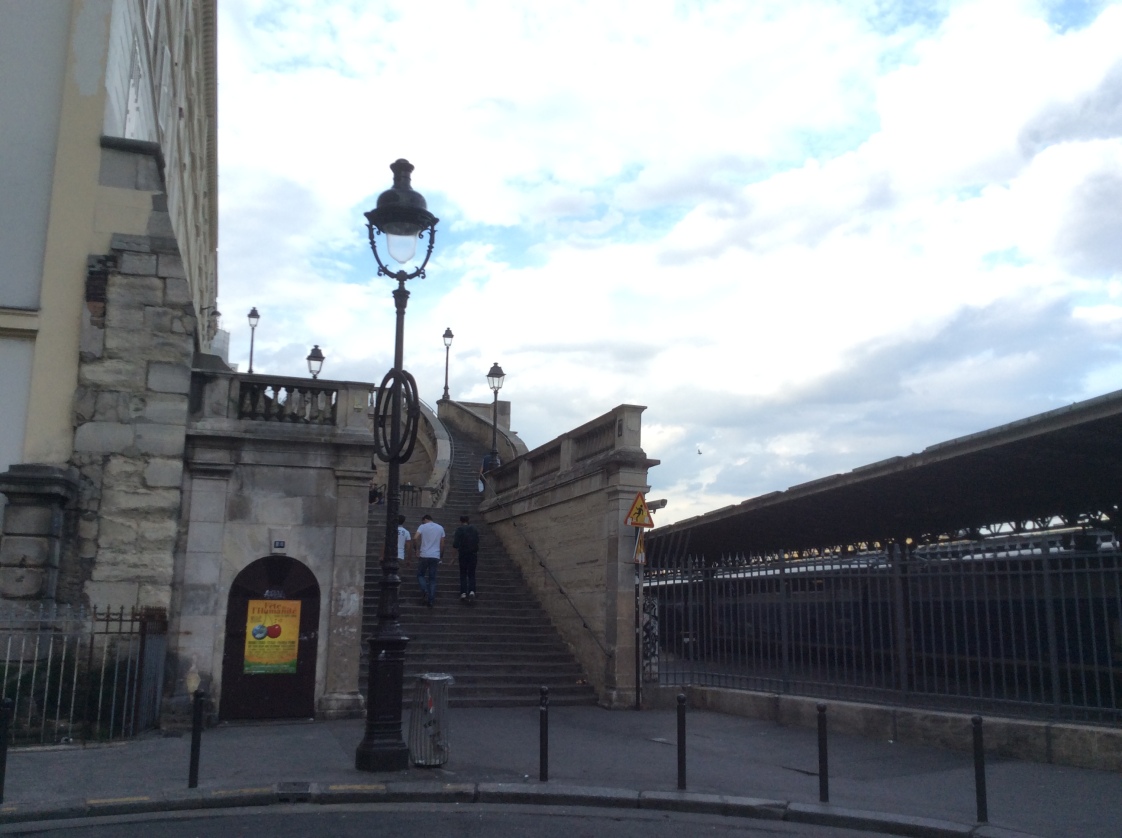 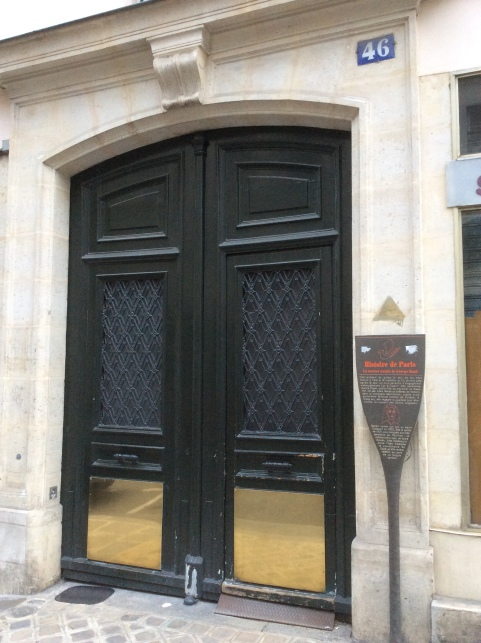 After a bit, I pick up the pace, since I lingered at the last place and it’s getting late. I head in the direction of the square at Republique, back to the friends’ house that Mary Wollstonecraft lived in when she first moved to Paris in December of 1792. There are two candidates for the site of the Filliettaz house: the first is at 22 rue Meslay, the number I found in all the biographies I referenced, which may reference only the address at the time. Or, it could be somewhere farther up nearer to the house the author George Sand was born in, number 15 at the time of her birth in 1804, which is, of course, is close to 22.

A couple is strolling down the street, an older man in theatrical round blue glasses and a glowing green cardigan, and a younger tanned man with a leather vest and  wavy hair ‘artlessly’ swept back in a ponytail. They catch me looking around and I wish them good evening, and the man in the green cardigan asks me where I’m from. As usual, my poor pronunciation of French gives me away, though he tells me it’s my ‘happy visitor smile’. He tells me what a great street Meslay is and I agree, and he helpfully points me towards George Sand’s house. I tell him the object of my quest, but he hasn’t heard of the Filliettaz house, though is familiar with Mary Wollstonecraft, but doesn’t know she ever lived here. We say good evening and part ways.

A view of rue Meslay, Paris

Another view of rue Meslay 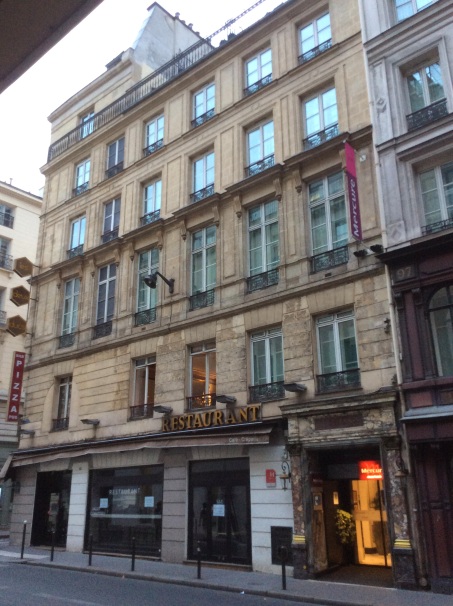 Though I find the Sand house easily, try as I might, I see no indication of the original Filliataz house andits exact location, just as I couldn’t in my books or online, so I photograph the part of the street and the houses near enough to the Sand house to be number 22. As you can see, it’s really a great street, just as the man said, and it does seem more likely that Wollstonecraft lived in a house near this end of the street, given the story of seeing the King passing by, since it’s higher up and the street veers closer to Boulevard Saint-Martin.

The last stop is 95 rue de Richelieu, which the State Department paper describes as the former 101 rue Richelieu. The name of the house where Thomas Paine lived with James Monroe and his family was the Hôtel Cusset, and I find this name with the address carved into an ornate lintel made of an incredible variegated, colorful stone over the doorway of another grand building just down the street from the current 101 that I visited last week. The address 101, which I found in more than one source, must have been the old address, and if that’s true, this lintel must date after Paine’s and Monroe’s time here.

Entryway to 95 Rue de Richelieu, once the Hôtel Cusset and former residence of James Monroe and Thomas Paine

As I described in the tale of my second day in Paris, Paine was physically broken down from his imprisonment in the Luxembourg, and the Monroes, while sympathetic, found him increasingly difficult to put up with over the two years he stayed with them afterwards.

This place, now a hotel in the modern sense, is right around the corner from where I’m staying, and the kind lady at the front desk suggested that I return when the day manager’s there who might be able to tell me more about the history of the building. Since it’s growing dark and I’m getting hungry (do you notice that the beautiful stone that surround the doorway look like perfectly marbled charcuterie and veined blue cheese, or is that just my hungry belly making that observation?), I plan to do that very thing tomorrow. 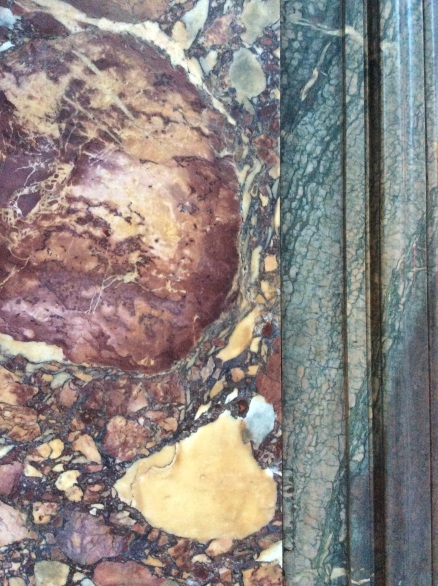 ‘A History of the Official American Presence in France‘, U.S. State Department.