I leave the Myers Building at the former site of Joshua Fry Speed’s store and Abraham Lincoln’s last law office on S 5th Street, and head north, crossing E Washington St, and continue halfway up the block. On my left (west), at 109 N 5th St / NW Old State Capitol Plaza, is a historical marker for the Stuart & Lincoln Law Office. John Todd Stuart was Lincoln’s first law partner, the man from whom he borrowed the law books he needed for his legal training, and his future wife Mary Todd’s first cousin. Lincoln received his license to practice law two years after he began his studies, and joined Stuart’s law practice as a junior partner in April of 1837. He was living over Speed’s store, having moved here to Springfield to embark on his legal career, so he walked more or less the same route to get to work as I walk today from the Myers Building… Read the written version here 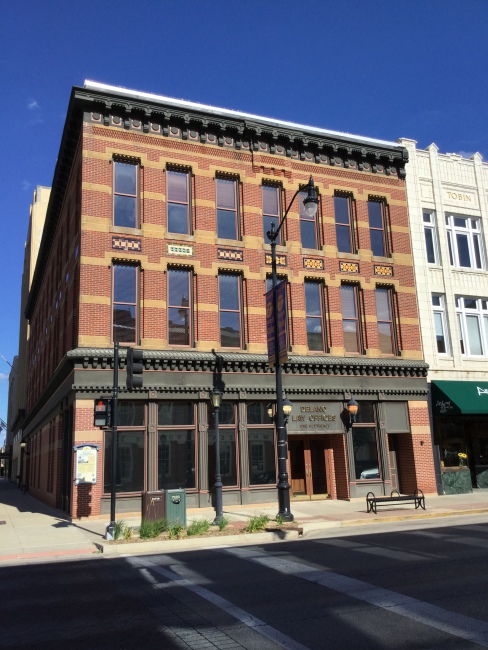 1880’s Italianate building at the former site of the American House Hotel at 6th and Adams, Springfield, Illinois, renovated and restored by its current occupants, Delano Law Offices

After my visit to the Old State House, I notice one of those Looking for Lincoln historical placards on a building to my left as I walk towards my next destination. It’s an attractive three-story red and yellow brick Italianate building from the later 1800’s, too late to be from Lincoln’s time. I draw near and read the placard and the small house-shaped bronze plaque near it.

This building stands at the southeast corner of 6th and Adams, on the former site of the American House Hotel. It was the largest hotel in Illinois, admired for its huge size and praised for its lavish, exotic, ‘Turkish’ interior design. Despite its reputation and the fact that it was the hotel of choice for dignitaries and the better-off, there doesn’t seem to be any easy-to-find photos of it. There’s one on the placard of the Old State House with the plain white walls of the three-story, rather plain Hotel in the distance, but that’s about it. I can find no photos of its splendiferous interior either. It stood here from 1838-1870, a little too long ago for me to find a postcard image of it, my tried and true source type for images of historic buildings… Read the written version here