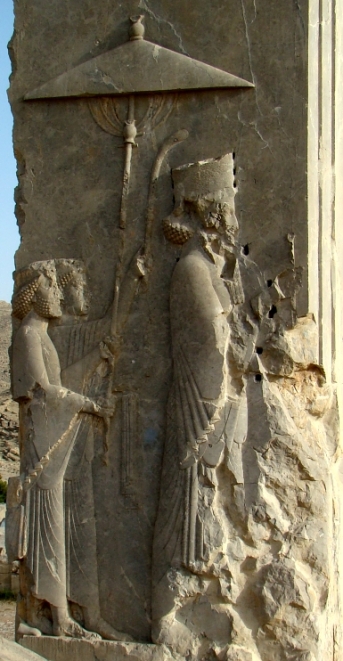 Relief of the Persian king Xerxes (485-465 BC) in the doorway of his palace at Persepolis, public domain by O. Mustafin via Wikimedia Commons

I’m now reading Book Seven of Herodotus’ Histories which tells the story of Xerxes I of Persia and the second invasion of Greece, which he led to avenge the defeat of his father Darius, who led the first. Darius was defeated at the battle of Marathon when the Athenians and their allies the Plataeans, badly outnumbered, managed to drive away the Persians. In this story, I came across another interesting exchange I’d like to share with you.

After reviewing his massive forces, Xerxes calls for Demaratus, a former king of Lacedaemon (city-state of Sparta) who had defected to Persia after being deposed by a rival. He asks Demaratus if he believes that his fellow Greeks will dare oppose his invasion considering the size and wealth of the new Persian army. After all, Xerxes asks, ‘How could a thousand men, or ten thousand, or even fifty thousand come to that, possibly stand up to an army the size of mine, when all of them enjoy a similar degree of liberty, and have no one man in command?… Just perhaps, were they like us in having one man set in authority over them, they might indeed be prompted by their dread of him to conquer their own instincts, and under the compulsion of the whip to advance against a force much larger than themselves. Left to their own devices, though, there is no way they will do either of those things.’ (Histories 7.103)

Xerxes is speaking here of the land of Athens and Lacedaemon, cradle of democracy, a novel form of government at the time. Many of us moderns who are raised in societies which inherited that spirit of government would respond: ‘But of course! A free people who participate in their own government have a stake in the outcome of public enterprises. Therefore, in war or peace, free people have a reason to care about their outcomes and to be personally motivated to succeed, because the success belongs to each individual as well as the society. Those who are tyrannized and enslaved, however, have no personal stake in the outcome, and fear only motivates one to do the minimum needed for survival. Indeed, fear and resentment of tyranny can motivate the people to undermine the efforts of the tyrant, and to defect to another state at the first opportunity.’ I expected Damaratus to give some such answer.

But Damaratus takes a different tack. Though he begins by citing the courage and martial discipline of the Greeks, he tells Xerxes the main reason he believes the Greeks will stand up to him whatever the size of his army. They’ll resist, he says, because ‘Free as they are, you see, they are not altogether free. Set over them as their master is the law – and of that they are more terrified than ever your men are of you. Certainly, they do what it commands them to do – a command that never alters.’ (7.104)

I think it fascinating that Damaratus uses the expression ‘terrified’ when he describes the Greeks’ attitude to the law. I consulted two other translations and it used the word ‘fear’. I wonder: is this a fear or terror born of deep respect and awe, such as that due to the gods or nature itself? Of fear of their fellow citizens for breaking the social contract or upsetting the natural order of things? Why fear or terror? Then I realize: perhaps he uses this term because he wants Xerxes to understand what he’s saying, and the only thing Xerxes can imagine inspiring obedience is fear and terror. But it’s interesting that he holds on to that idea. After all, Xerxes knows that his father learned otherwise, and the hard way at that. A free

Or, do you think Damaratus means just what he says? That it’s possible that an otherwise free people can actually have a fear of the law itself? It’s not too far of a stretch, after all, that a religious, god-fearing society could fear something else that’s abstract which imposes order and its will on the world.

Or, it could be that Damaratus is talking about the fear of the Greeks betraying their own selves as living embodiments of the law. After all, if adherence to the law is instilled as a sort of sacred duty to the very thing that makes us both free and fully realized as human beings, then the thought of transgressing the law is as terrifying as the thought of destroying our very selves, of becoming something less than human. I suspect Damaratus is talking about something like this.

Cartledge, Paul. ‘The Democratic Experiment‘. From History at BBC.com