With my first day of discovery under my belt, I’ll start by telling you a little about the two wonderful women who are the inspirations for and subjects of my project, in case you’re encountering them here for the first time. 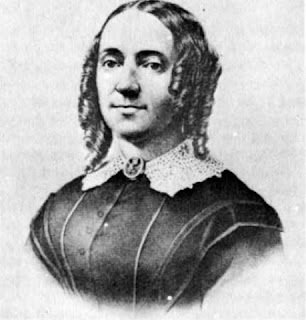 Ernestine Rose was a Polish, immigrant, feminist, abolitionist, public-speaking, socialist, atheist Jewish woman. Unless she had happened to be black, she had nearly as many cards stacked against her chances of leading a successful and happy life in her time as one person could have. To a person like myself and I suspect like you, dear reader, such a list of attributes today indicate her utter awesomeness! Anyway, Rose did manage to make a career for herself in which she was widely admired and financially stable, even sometimes well off, regardless of the fact that she was such a controversial figure. That’s because she had the good fortune to receive a very good education, she was an inspiring and gifted public speaker, she had a lot of energy and a strong work ethic, (despite her frequent struggles with ill health), she such displayed fearlessness and integrity in her convictions, and it didn’t hurt that she was very attractive, especially by the standards of her day.

Ernestine, born in 1810, was the daughter of a rabbi, and was well read and precocious at a young age. For example: she convinced her father to teach her to read the Torah in its original language so that she could discuss and debate the meaning of the actual text with him. When she was a young woman, she escaped an arranged marriage by appealing to the Polish civil court (rather than the local Jewish court as was customary) and decided to make the most of her life by leaving her segregated, anti-Semitic native city. She went from Berlin, where she learned German and invented the perfumes and a room-scenting device that helped support the family, to London, where she met her dearly-loved, fellow liberal-progressive husband William Rose, and finally to the United States, where she and her husband soon opened up a ‘fancy’ shop selling her perfumes and his silversmithing creations, and where she threw herself whole-heartedly into public speaking, writing, and organizing in support of women’s rights, abolition, separation of church and state, and other human rights causes. Her public speaking was as controversial as her unorthodox beliefs, since at that time it was considered immodest and unwomanly, limited to men only; but it was her open and unapologetic atheism that was most controversial, and most unusual. She lived and worked in the United States, based in New York City, from 1836 to 1869, when she moved to England to (mostly) rest and retire from public life when her health began to give out for good. 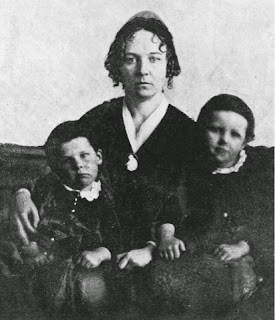 Elizabeth Cady Stanton, born five years after Ernestine in central New York State, was as fearless and tireless in her activism as she was in motherhood. Like Ernestine, she was an outspoken and unapologetic feminist, abolitionist, and freethinker. After a thorough formal education, somewhat unusual for women in her time, she married at age 25 (leaving out the ‘obedience’ vow, since she viewed marriage as a partnership between two consenting, rational adults, rather than a hierarchical power arrangement) and raised seven children.
She wrote prodigiously, and since giving birth to and raising so many children kept her too busy for frequent travel and public speaking, she worked closely with Lucrecia Mott, another founding feminist, and entered into a longtime collaboration with a fellow feminist, Susan B. Anthony. While the two were very different in so many many ways (Elizabeth was fiery and impolitic in expressing her opinions, Susan was more tactful; Elizabeth was a skilled writer and orator but less skilled organizer, while Susan was the opposite; Elizabeth was an outspoken critic of religion and the Bible, Susan, like Lucretia, was a Quaker), they were extremely attached to one another, and their often opposing strengths made them probably the single most effective and influential team in feminist history. (Side note: if you are interested in the history of human rights and progressive activism in the United States, you may be struck by the prevalence of Quakers among their ranks. While there were many Quaker sects, they tended to hold radical beliefs for their day: they were egalitarian, pro-education, anti-war, and encouraged critical discussion and examination in matters of religion.)
With Lucretia’s, Susan’s, and others’ help, especially while she was still home bound with her young children, Elizabeth conceived of and put together numerous meetings and organizations, including the first women’s rights conference at Seneca Falls in 1848, numerous abolitionist and temperance events, the American Equal Rights Association, the International Women’s Council, and many more. She wrote the Woman’s Bible, A Declaration of Sentiments (modeled on the Declaration of Independence), Solitude of Self (often considered her greatest speech), History of Woman Suffrage (with others), and much more. She was the first woman to run for Congress, wrote and was the primary impetus behind the passage of the first federal bill protecting women’s property to pass into law (following Ernestine, who has campaigned for it earlier), and annually campaigned, unsuccessfully, for suffrage for women. (Though she lived a very long life, she did not live to see this victory achieved.) Like Ernestine, she was a rare outspoken critic of religion, and considered all of them anti-woman, especially the three religions of the Bible. She worked up to the day she died in 1902 (on October 27th, the date I flew in to NYC.)

Now that we have a brief history of those great women fresh in our minds, let’s follow in their footsteps!

Shortly to follow: an account of my first day in New York City. visiting sites associated with their lives here…..