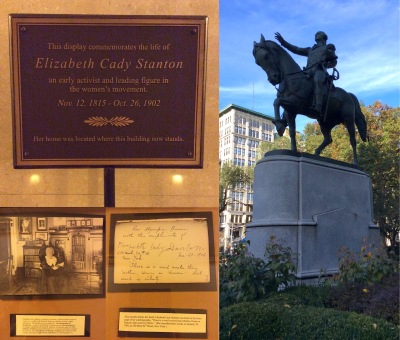 Many say that the idea of ‘feminism’ is outmoded: it smacks of reverse sexism, and the women’s rights movement has pretty much accomplished its goals anyway, at least in the free world.

Why flog a dead horse, ladies?

In my last travel blog series, following in the footsteps of great thinkers who changed the world, I explored New York City. I found statue after statue, monument after monument, portrait after portrait, of important men in American history: there were Lincolns, Jeffersons, Clintons, and Hamiltons galore, and speaking of horses, a multitude of Washingtons, often astride one. Yet search as I might, in this city that birthed and nurtured so many of the greatest American intellectual and reform movements, I was hard pressed to find such tributes to their female counterparts. Wait! there’s one: Eleanor Roosevelt, great humanitarian… and oh yes, wife and cousin to two American presidents.

Of course, Eleanor should be honored with this beautiful monument for the great things she did. But would she have been if it weren’t for the famous men in her life? Hmmm. It’s not that statues, monuments, and other public works of honorary art are necessary to show how important anyone’s achievements are, so long as we remember them and pass on their ideas. But they do provide a window into the values and interests of the people. Initiatives, petitions, and referendums are submitted, committees form, public collections are taken up, and wealthy people grant commissions to create these public works.

In short, these monuments go up when enough people care enough to publicly show how much they care. 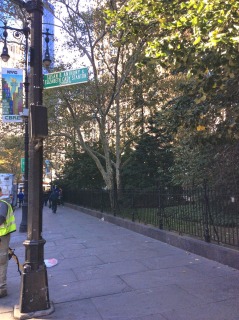 So how can it be that great women like Mary Wollstonecraft, Ernestine Rose, Sojourner Truth, Elizabeth Cady Stanton, and Margaret Sanger are commemorated so modestly or so seldom? (A little plaque or a sign on a street corner here, a dusty little cabinet display there.) When their efforts, arguably, liberated more people than anyone else? After all, women make up more than half of the human race, and prior to their life’s work, most women in the world lived almost completely under the subjugation of men, most with restricted education, all denied the full range of rights and opportunities accorded to men.

I feel a free woman, myself, in most ways. I read, think, work, play, procreate (or not!), travel, dress, and so forth, as I decide for myself. Thanks, brilliant, fearless, principled women of history! But their work is not done so long as great women are not honored equally as great men, and working women as much as working men, and women who need health care as much as men need health care, and so on.

Is feminism over? I’ll believe it when I see it. In marble, granite, brass… or in the office of the President of the United States. Maybe then.

*Listen to the podcast version here or on iTunes