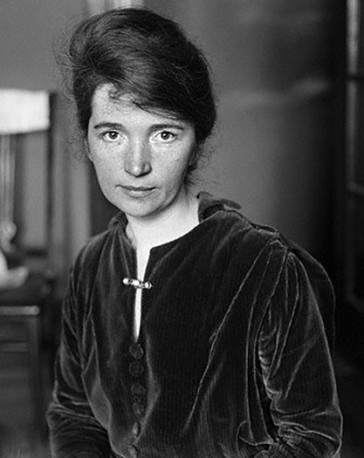 Margaret Higgins Sanger was born on September 14, 1879 into a large Catholic family with 11 surviving children. Her mother died at about age 50 from tuberculosis. As young Margaret saw it, her mother was worn out from her 18 pregnancies, and would cite this as one of the many reasons she so passionately advocated for the right of women to control their own bodies and their own fertility.

She went on to become a nurse who worked with poor women in New York City in the 19-‘teens and twenties. As she saw these women struggle with the toll that uncontrolled pregnancies took on their families’ finances and their own health, Sanger became convinced that ‘birth control’, a term she invented, was essential if these women hoped to escape poverty and oppression. She opened America’s first birth control clinic and despite numerous arrests and fines, she continued her fight for reproductive rights. She founded the American Birth Control League in 1921, which became the Birth Control Federation of America in 1939 after merging with another organization, which in turn became Planned Parenthood in 1942. She continued her activism right up to her death in 1966. Sanger was instrumental in the creation of the first birth control pill Enovid, first available to the public in 1957. She also lived to see the Supreme Court validate her beliefs in the basic human rights to openly talk about sex and to control their own fertility in the Griswold v. Connecticut decision of June 7, 1965.

Sanger remains a controversial figure today. An ardent feminist, human rights activist, and advocate of sex-positivity, Sanger was also a eugenicist, believing that birth control was at least as important a tool for limiting the production of ‘the unfit’ (her words) as it was for women’s liberation. Sanger agreed with many leading scientists and progressives of her day in ascribing to so-called Social Darwinism (a problematic term since it doesn’t reflect Darwin’s own views as he expressed them), which applied the principles of natural selection to human social practice.  She did not, however, support any kind of compulsory or coercive forms of birth or population control, such as that practiced by the Nazis and even by the United States government, who forcibly sterilized thousands of so-called ‘feebleminded’ women. Instead, Sanger was an ardent advocate of self-determination, free speech, open discussions of sex and sexuality, and education, education, education. It was up to informed and thoughtful people, Sanger believed, to take responsibility for their own sexual choices and to convince others to do the same.

Unlike many other eugenicists, however, Sanger was not a racist. She worked closely with many leading black civil rights figures, believing, as they did, that birth control would have the same liberating effect on the black community as would for women generally. By limiting the number of children according to how many they could afford to raise and when, parents could more readily pursue an education, start a business, or otherwise devote their time, energy, and health to improving their standard of living which, in turn, they could pass down to their children.

Aside from her human rights activism, I find Sanger’s beliefs about human sexuality and its important role in spiritual and mental health most fascinating. I’ve chosen her as one the topics of an upcoming History of Ideas Travel Series as soon as I can make it happen, stay tuned! In the meantime, please follow the links in this article above and below to learn more about this important, fascinating, and troubling woman, and I highly recommend Jonathon Eig’s The Birth of the Pill, in which he recounts much of her personal history as well as her role in the Pill’s creation.