I heard of Leonard Cohen’s death when I returned home from work yesterday evening. Thursdays are my long day at the doctor’s office, and by the time I left, we had cared for about sixty patients, and I had just enough time on my short break to do a little reading and quickly tuck a little lunch away. No time for social media or news and no interest in them either, weary from election coverage and its aftermath.

So I learned of his death not from the cold glow of a screen but from the living face of my husband Bryan, who is also one of my oldest friends. We’ve sung Cohen’s songs together countless times over the years as he played guitar, or a capella while driving, which I especially love to do. Bryan had his guitar out, in fact, likely expecting I would want to sing his songs together at that moment. But after feeling stunned and for some reason …well, what I can best describe as wounded, after a few moments I felt the urgent need to go out to a place where people gather. I felt that being in the presence of warm, vibrant life might prevent me from sinking backing into the glum pessimism that had overshadowed the last two days, a mood so at odds with Cohen’s own life and spirit. We went to Cato’s, a favorite gastropub on Piedmont Ave in Oakland, where the lights glow warmly, the food and beer are very good, the wooden tables are deeply carved with graffiti, there’s often live music, and always the pervasive sense of neighborly camaraderie.

Just one friend, it turned out, was free to meet with us on such short notice, and we passed a happy evening, talking about the arts (mostly music and film), politics, and work. And we talked about Cohen, his wisdom and his humor and his life and his poetry, about what his music meant to us and did for us, and we swapped favorite songs, my own which I’ll share with you below. And we talked about how we came to know his work.

For me, it was from a guy whose name, I think, is Brad. Certainly begins with a ‘B’. I worked with him a very long time ago at a vintage clothing store; I think I was eighteen or nineteen at the time. He usually wore rather close-fitting plain tee shirts with plaid shorts from the 1960’s and early 1970’s, of madras cotton, wool blend, or polyester, and had little round glasses. I loved his style. He was tall, blond, had good taste in everything, and was a linguistics major. ‘Brad’ put on 1975’s The Best of Leonard Cohen, a collection for which Cohen picked the songs, wrote liner notes, and designed the packaging. I was stunned at what I heard, and very soon afterward bought several of his albums on tape. I wore them out, especially in the little boombox I kept with me; it served as my car stereo from the backseat of my little hatchback. In Southern California, you can’t get much of anywhere without driving, especially then, so I spent a lot of time in that car listening to music, especially Cohen’s at that time, sometimes rapt in attention, sometimes singing along.

Sometime in 1996 or ’97, I learned that Cohen was living at Mount Baldy’s Zen Center and that he would often visit the Village, the artsy little town center of nearby Claremont. So, being the ardent fangirl that I was, I began to hang out in the Village even more often than I had been, hoping I would find an opportunity to meet him. With its Folk Music Center (founded by Ben Harper’s grandparents), Rhino Records (one of the very best music stores ever), funky little stores, coffee shops, live music, and nearby drum circles at one of Claremont’s many colleges (I’ve forgotten which one), the Village was already one of this then-hippie-girl’s regular haunts. But, alas, that meeting was never to occur, not even a sighting from afar.

My well-played, yellowed copy of the Leonard Cohen tribute album I’m Your Fan

I’m quite sure I purchased my copy of I’m Your Fan at Rhino Records. This 1991 Cohen tribute album features prominently in Malcolm Gladwell’s discussion of the history and evolution of one of Cohen’s masterpieces, the majestic Hallelujah, in a recent Revisionist History podcast episode. I must admit, I experienced a moment of music-nerd smug self-congratulation when Gladwell speaks of being one of the enlightened few who bought this album. Anyway, it has some good covers on it. Geoffrey Oryema does a lovely performance of Suzanne; the Pixies rock I Can’t Forget; R.E.M. and David McComb with Adam Peters are true to the urban-decay spirit of First We Take Manhattan and the self-deprecating, odd creepiness of Don’t Go Home With Your Hard-On, respectively; Dead Famous People do a sweetly pop-py take on True Love Leaves No Traces; and Nick Cave & the Bad Seeds recast the reflective Tower of Song into a raucous tour of musical styles. (‘I was born like this, I had no choice, I was born with the gift of a golden voice’ remains one of the sneakiest, funniest witticisms I’ve ever heard.) But best of all, John Cale does a glorious version of Hallelujah. I very much recommend you listen to Gladwell’s telling of the story of how Cale came to create the definitive version of Hallelujah which, in turn, became one of the most-covered and most-loved songs in popular music. And, you’ll likely learn some other nice little music history tidbits you didn’t know, too. Thanks, Malcolm Gladwell! 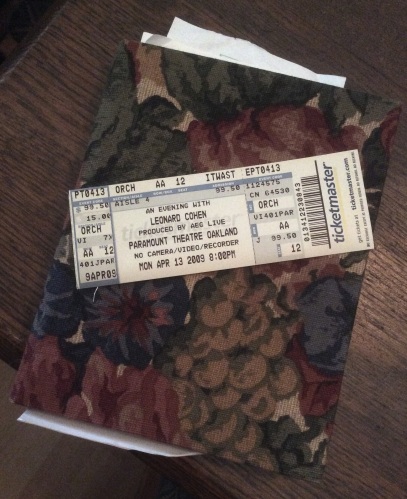 My Leonard Cohen concert ticket from Apr 13, 2009. It’s pictured on the notebook that became my concert diary, which records every concert I’ve gone to which issues tickets that I could keep and was a gift from my first love, who broke up with me to prepare for the priesthood though he ultimately decided to remain a layperson. I feel this little anecdote fits in with this story, though I’m not sure how.

I did, finally, get to see Leonard Cohen in the flesh, in concert at Oakland’s Paramount Theater on Monday, April 13th, 2009. How lucky I felt that I would get to see him perform at one of my favorite theaters, a gorgeous Art Deco temple to the arts, its gold-and-green interior replete with sleekly ornate stylized figures of animals and humans, real, mythological, and archetypal. He sang, danced, told stories, kneeled then stood then kneeled again very like we used to do at Mass, and gesticulated for two and a half hours. I marveled at his vigor while I was transported by his beautiful performance, and I thrilled and smiled throughout, here and there weeping just a little.

Here’s to you, Leonard Cohen!

Listen the podcast version of this story here, on Google Play, or subscribe on iTunes.

Here are some of my favorite songs and works from Leonard Cohen, those which first spring to mind that I must share with you. This list is by no means definitive and I will add to it over time, freely, as I am inspired to.

Please enjoy, and let Cohen transport, arouse, entertain, amuse, and enlighten you as he helps you find a little redemption here and there, as he has me.

‘God Is Alive, Magic Is Afoot‘, poem from Beautiful Losers, 1966 reading by Leonard Cohen. When I read it to myself, it sounds more like a chant, with a study drumbeat behind it

The description of a dream feast in Beautiful Losers, where Kateri Tekakwitha spills a glass of wine which spreads everywhere. I discovered it’s missing from my bookshelf, I loaned it out and never got it back, and Google Books doesn’t include that chapter. I’ll borrow it from the library.

Story of Isaac, 1969. The story of Abraham and Isaac has long fascinated and repelled me.

Joan of Arc, 1971. Like Mark Twain and Cohen, I’ve long been fascinated by Joan of Arc. My portrait of her hangs in my dad’s living room.

Passing Through, 1972. Written by Richard Blakeslee, I love Cohen’s performance

Nancy, 1972. Originally titled Seems So Long Ago, Nancy in 1969’s Songs from a Room. I love this version best.

At the Chelsea Hotel in July of 2011, before they kicked everyone out to remodel it

Take This Longing, 1974. Melts me every time

Leaving Green Sleeves, 1974. Only Cohen would think to write about a breakup with Henry VIII’s love interest

Paper Thin Hotel, 1977. The first song to make me empathize with a sex-starved voyeur. The next and last one to do so was Randy Newman with his You Can Leave Your Hat On. The Telegraph listed Death of a Ladies’ Man as one of Cohen’s least-good albums, but I don’t agree. It’s wonderful, though it’s true it’s very weird.

The Captain, 1984. The production’s odd and rather cheesy, but I still love it

Take This Waltz, 1988. …And only Cohen is brilliant enough to realize that Federico García Lorca’s great poem had be to set to music

Traveling Philosophy / History of Ideas series is a labor of love and ad-free, supported by patrons and readers like you. Please offer your support today!