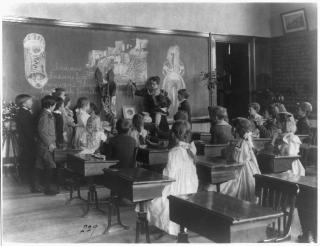 I grew up in a large, pretty close-knit extended family. There was a lot of dysfunction, as with many families, but a lot of love too. While I was often frustrated by the choices of some relatives (such as the tendency to enable bad behavior by sheltering the ‘sinner’ from consequences, or pretending it wasn’t happening), I was also secure in the knowledge that I belonged to a large, loving circle of people who would never abandon each other.

We were also a very insular family. We mostly hung out with each other and a few close family friends, pretty much all from church and pretty much all holding similar beliefs. Many of us kids, especially the older ones, had little contact with people outside of family and church. Many of us were (and some still are) home-schooled with a very conservative, fundamentalist Catholic curriculum, and many others attended all or mostly religious schools.

Given the state of much of the public school system, at least in the working class neighborhoods where many of us grew up, a part of me sympathizes with this choice. American public schools often leave much to be desired, to say the least. Since we have such a rotten system in America of funding public schools, with funding determined by the local tax base, we create a classist school system where the kids who need the most help don’t get the funding. So much for the non-aristocratic, egalitarian, freedom-of-opportunity ideal of America! But I digress…

But it seemed that the choice to limit our schooling to a strict Catholicism-centric education was usually based less on the concern with education quality as on a concern with raising children to replicate their parent’s beliefs and lifestyles. This makes sense in a certain way: parents want what’s best for their children, and people generally believe their own beliefs are the best, so, it’s logical parents want their children to believe and live as the parents see fit.

But here’s the way in which that doesn’t make sense: children are not replicants of their parents. They have their own thoughts, their own personalities, and their own sets of experiences. The world is full of different beliefs systems and lifestyles, often incompatible with those of the parents, that fulfill people, that suit them and make them happy. Every child, however they were raised, will inevitably confront that fact, and in today’s world of rapid, comprehensive access to data from all over the world, it will not take long.

Many parents recognize these facts, and are comfortable raising their children in a cosmopolitan fashion. They want to equip their children with all the information they might require to navigate the world successfully in any community they may end up being a part of. To this end, they want children to truly understand not only their own beliefs, but the beliefs of others. While these parents may explain to their children why they think their own beliefs are better, they know that understanding the alternatives strengthens their capacity for critical thought. These patents also understand that their children should be comfortable interacting with people who believe and behave differently than they do, and familiarity with other faiths and cultures is the best way to accomplish this. Last but not least, these parents have the epistemic humility to admit that there’s a possibility that they are wrong, and they want to afford their children the opportunity to discover for themselves if that’s the case.

Such wise parents would agree, as I do, with Daniel Dennett, the philosopher who promotes the idea that a study of world religions should be a basic part of childhood education. Since religion is so central to both private and public life for most inhabitants of the world, he argues, children require this information to be wise and informed citizens. I think the same applies to science, politics, history, literature, and other disciplines relating to how people go about sharing, navigating, and understanding this world together.

For those parents who insist on providing an ideologically narrow education for their children, I’d ask them to consider this questions: when children grow up and confront different beliefs, customs, and lifestyles for the first time, as they inevitably will, what happens? What happens, for example, to the child of Biblical fundamentalists who finds out that almost all scientists, besides the half-dozen quoted in their textbooks, believe the Earth is billions of years old? Or that prayer doesn’t, statistically, prove to be effective in healing people? Or that people of other belief systems often live as harmonious, happy, fulfilled, ‘blessed’ lives as they do? Or even better? What happens to the barely educated woman, married off in her early teens and taught to be submissive to her husband, when she discovers that other women have the opportunity enjoy a rich intellectual life, a successful career, or a partnership with a spouse that respects her as an independent person?
For some children educated in this narrow way, whether their parents’ intentions were benign or otherwise, they will mostly reject alternative beliefs and ideas they come across out of hand. (‘That can’t be true, Dad would never lie to me.’ ‘I feel deep in my heart I know the truth, so I don’t need to question it.’ ‘Those poor Buddhists, they didn’t learn about Jesus. When they do, then they’ll truly be happy.’ ‘That’s the Devil talking, better not listen or I’ll be tortured in hell.’ ‘Liberals don’t believe in anything, but I do, so they must not have anything of value to say.’ ‘Environmentalists should just trust God instead of the government to protect the earth.’) They will grow up to more or less replicate the lives of their parents, happy in the security of knowing that they know the truth, what life’s really all about.
Others (I think very much a minority, but some) will thoroughly question the beliefs they were raised with in light of new ideas they’ve confronted, and in the end retain their parents’ beliefs because, to them, those beliefs ‘held up’ to the scrutiny. They might make some modifications here and there, but overall, stay convinced. These few are among the happiest of people, even happier than the unquestioning believers, I think, because they enjoy not only a sense of security in their beliefs, but intellectual satisfaction.

Still others will end up with a smorgasbord of beliefs, considering some sacred and unquestionable, discarding others, and adopting new ones. (Conservative Catholics derisively call others ‘cafeteria Catholics’ for engaging in this sort of picking and choosing.)

Many more will engage in ‘doublethink’, holding two or more contradictory beliefs at the same time. To take another example from the religion of my childhood, one might believe that it’s ‘spiritually true’ that the body and blood of Jesus is present in the eucharistic wafer, but also believe it’s scientifically impossible for a thing to have all the qualities of bread while simultaneously being composed of human tissue. (The psychological phenomenon of cognitive dissonance, how pervasive it is and the ways we deal with it, is discussed thoroughly and fascinatingly in Carol Tavris and Elliot Aronson’s book Mistakes Were Made, but Not By Me. I highly, highly recommend it.)

But there are two big risks for the hopeful yet, I think, misguided parents who seeks to shelter their children from knowledge that could contradict their own cherished beliefs. And I think parents would do well to consider these risks carefully before embarking on this project of transforming education into something more akin to indoctrination.
Risk #1: Your children might grow up to challenge you on your perceived deception. They will ask: What did you have to hide? Why did you feel you had to shelter me from thinking through these matters in an informed way? If what you taught me was really, evidently true, than why did you go to such lengths to keep me from learning about opposing ideas? And why would you undermine my ability to defend the beliefs you wanted to pass on, by keeping me ignorant of the challenges to those beliefs?
I went through that process myself, resenting my education which as narrow and limited until I took it into my own hands and chose a public college rather then the very conservative one my family would choose for me. Initially, I questioned the motives of my family, and was very angry that I was years behind in many subjects, especially science and history. Over time, I’ve come to realize that it was their tactics, not their motivations, that were at fault. But the damage had been done.

Risk #2: But by fair the largest danger is raising children with the potential to be bigots, even violent ones. While most children brought up to strictly conform to the beliefs of their parents will not turn out that way, of course, too many do. Consider this: what inspires oppression, warfare, and terrorists attacks? They come from the ideologically ‘pure’, from those who think it’s their job to make sure the world conforms to their ideology, from religious dogmatism to racial ideology to political utopianism. And the more isolated people are in their minds from the ideas and beliefs of others, the more sure, the more committed they are, that they are right, so everyone else must be wrong. And if others are wrong, if they are different, they are the enemy.

Since people are rarely convinced to convert to a whole new set of beliefs overnight, the ideologue often resorts to violence as a means of forcibly imposing those beliefs. Ironically, violence, though a popular tool
throughout history for trying to impose change, it’s the least effective, as psychologist Steven Pinker and other researchers reveal. To this day, religiously and politically motivated terror attacks and assassinations continue to make headlines.

Yet despite this, things on that front are getting better all the time. I recently heard Pete Seeger say, pertaining to the environment, that the world will be saved by people working in their communities. I think the world will also be saved by children who grow up in this new era where information about the world is not so easily hidden from them. Despite some parent’s best efforts, children can no longer so easily be sheltered in little bubbles of idealized ignorance, sentimentally dubbed ‘innocence’. Since information flows so freely, children now grow up exposed to media that brings others’ experiences so vividly to life, and are now more comfortable in the presence of people who look and think differently then they do. Familiarity with ‘others’ humanizes them, and communities will come to be determined mostly by shared interests, not by geographic location or ideological isolationism.

So parents, teach your children not only how to be good people, but to be informed citizens of the world. It will be a safer and more wondrous place for them and their progeny, and I bet they’ll thank you for it.