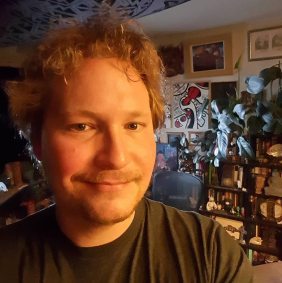 I’m so pleased to welcome Eric Gerlach as a regular contributor to Ordinary Philosophy!

Eric was my teacher some years ago when I returned to college to study philosophy. I attended his Introduction to Philosophy class, and it very much inspired and influenced me to this day. In the class, he emphasized and explained the connections between human thought in all times and places in a friendly, warm, and easygoing style, and ancient philosophy from all over the world seemed as relatable, timely, and relevant today as it ever was. He still teaches this excellent class, which I very much recommend if you’re ever enrolled at Berkeley City College. I’ve been continuing to enjoy his work at his blog for some years now.

I’m so thrilled that Eric accepted my invitation to lend his voice to Ordinary Philosophy, and I’m sure you’ll find his work as interesting and edifying as I always do. Please join me in extending Eric a warm welcome to O.P.!

I’ve been listening to this wonderful new series by the always delightful historian and documentarian Bettany Hughes, as she delves into the origins of philosophy.

She tells us the story of three ancient thinkers who remain among the world’s most influential: the Buddha, Socrates, and Confucius. These men, who all lived within one hundred years of each other, formulated their groundbreaking philosophies at a time when new technologies in food production, housing, and travel allowed human beings, for the first time, to form sophisticated, specialized societies. This enabled people to spend a lot less time devoted to mere subsistence and to divert much of their energies into the arts, into thought, and into figuring out how the world works. It also made people ready and able to think of life as something they could improve and control, not merely subject to the whims of nature and of capricious, mysterious gods.

Hughes is not only enamored with these three great thinkers because they are fascinating in their own right, but because she thinks of philosophy as I do: a deeply practical pursuit, in which we puzzle out how to go about living as good a life as we possibly can, as individuals and as societies. As I’ve heard her say, we need to bring philosophy back to the street where it began, where Buddha, Socrates, and Confucius first confronted the world with their ideas, and where it also belongs.

As I sit here and sit here, racking my brain for a place to start this book review, I find I’m at a loss. I should have scribbled some notes as I was going along. But I didn’t, dammit. Perhaps it was because I was too enthralled all the while, each chapter taking me to new and surprising places. And since I’ve finished, it left me with so much to think about all at once, so therefore, I don’t know where to begin…

Well, here’s the gist of it: Plato at the Googleplex, by Rebecca Newberger Goldstein, is about Plato, his philosophy, his life and times, and his relevance to the world today. The chapters jump back and forth in time: each non-fiction chapter is about Plato’s (and his main influence Socrates’) life and thought, and is interspersed with a fictional one where Plato finds himself in some modern scenario. In each of the latter, he’s involved in dialogue and debate with various figures representative of our time, from an advice-session-turned-discussion with a media escort accompanying Plato in advance of his Authors at Google presentation and a tech geek on lunch break, to a panel discussion on how to raise a perfect child with a tiger-mom-slash-idealist and a Freudian, to an interview with a Bill O’Reilly-like pundit, to an MRI session in a neuroscientist’s research lab.

I’ve read some Plato over the years, a book here, and (mostly) a selection there, and he nearly always felt very removed. His language seemed remote and foreign, his thought experiments (the mythical Republic) seemed outlandish and overly idealistic, and the leading-question and answer style of his Socrates felt contrived, by modern standards of taste. Yet it took this scholar of Plato, who brought to bear her considerable skill as a novelist, to reveal Plato as the thinking, seeking, flesh-and-blood person who, more than just about anyone, got this whole philosophical project going in a big way.

Plato got it all going by showing us how to question everything, and why we should: it’s the only way to make progress. Not progress for its own sake: progress for our own sake, as it’s necessary to make every life better in a practical sense, and more worthwhile in a personal and social sense. Goldstein addresses time and again the objection that philosophy makes no progress, since it’s still asking the same questions. While the ‘same questions’ part might be true, the ‘no progress’ part is not. Some of the questions remain the same because they’re the questions each individual person must answer in regards to their own lives and experiences, no two of which are just alike. Therefore, the answers will be different for each person. Others of these ‘same questions’ are of such magnitude that we must keep asking them in order to slowly fill in the wealth of detail each answer requires if we are ever to get to a satisfactory one. Some remain important but unanswered, not necessarily because they are unanswerable (though many may well be), but because we don’t have the tools or information we need available yet. And so on and so forth.

Yet the most important reason we keep asking so many of these same questions is that the search for answers keeps generating yet more important questions, and yet more answers. And we, intelligent, restless, creative, curious creatures that we are, love love LOVE trying to find things out. I think more than we love knowing, though we love to know some things. And it’s the practice of never taking things for granted, never resting on our epistemological laurels too long, always asking, that Plato teaches us is the best way to learn about the marvelous world around us, and the universe out there, and that within our own minds.

In short: I highly recommend this glorious book. We would all do better to know more about Plato and why he’s so important, and it’s hard to imagine anyone doing a better job of describing why and how this is than Goldstein. But more than that, this book is a celebration of philosophy, the love of wisdom itself. It’s taken its place way up there among my very favorites!
(It’s = Philosophy and this book.)

Plato at the Googleplex: Why Philosophy Won’t Go Away. Pantheon, New York 2014.
http://www.rebeccagoldstein.com/publications/plato-googleplex-why-philosophy-won%E2%80%99t-go-away