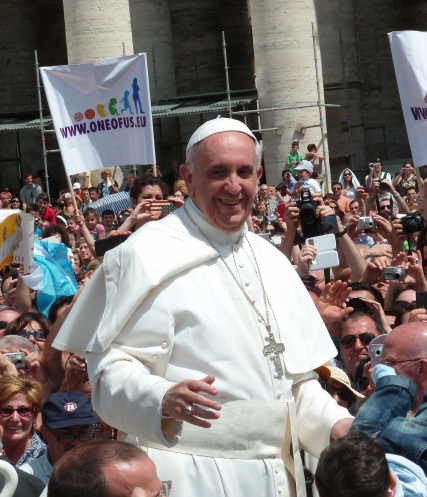 Pope Francis among the people at St. Peter’s Square, May 12, 2013 (cropped), public domain via Wikimedia Commons

This podcast episode, presented by Ruth Alexander, opens with a discussion of a letter to Pope Francis dated July 16th, 2017. Titled Correctio filialis de haeresibus propagatis, it was composed and signed by 62 conservative and traditionalist Catholic clergy and theologians. In it, they accuse Pope Francis of ‘the propagation of heresies.’ It’s a response to Pope Francis’ public re-consideration of the Catholic Church’s prohibition of the sacrament of Communion to divorced and remarried people. Since this is one of the most sacred and essential practices of the Catholic religion, it’s a serious matter for excluded believers, and it may drive many people away who might otherwise embrace the Catholic faith.  The podcast episode continues with guests discussing their reasons for supporting one side of the debate or the other, and explores some of the relevant history and issues surrounding this controversy.

To many, Pope Francis’ open-mindedness to changing this teaching is a very welcome development, signaling that the Catholic Church remains a relevant and welcoming faith in the modern world; to others, it represents a betrayal of the very idea of what a true and eternal religion is. It’s a fascinating story to consider for anyone interested in the nature of religious belief and what it means to people, and in the history of religion in general.