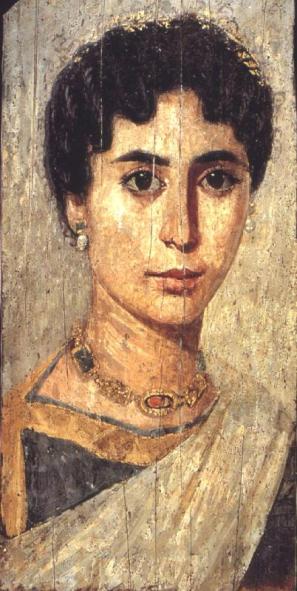 Detail of the death portrait of a wealthy woman, c. 160-170 AD near modern-day Er-Rubayat in the Fayum, public domain via Wikimedia Commons

Hypatia’s birthday is somewhere between 350 and 370 AD; a range of dates indicating great uncertainty, to be sure, but original sources that old are hard to come by, especially from a city as turbulent and violence-torn as the Alexandria of her day. The day of her death is better known, sometime in March of 415 AD. Since the latter date is more precise, we’ll break with our birthday remembrance tradition here and celebrate the memory of Hypatia in the month of her tragic and violent death instead of on the date of her birth.

She was a mathematician, astronomer, teacher, and philosopher who wrote commentaries on important works in geometry and astronomy with her father Theon, likely contributing original work of her own. Hypatia was a Neoplatonist, a philosophy with mystical overtones which posits that everything derives its being from the One, an ultimately conscious yet nonmaterial, non-spacial entity which is the pure ideal of everything that is. She was a scholar and teacher in a field and in a male-dominated world, and historians from her day to ours emphasize her extraordinary talents and her femininity with a nearly equal mix of awe and bemusement.

So let us remember and honor Hypatia for her great contributions to human knowledge and to the history of women’s liberation, living proof that women are equals in intellect and courage.

And let us also remember her sad death as a cautionary tale against those who inflame popular sentiment to seize power for themselves. Hypatia met her death at the hands of a mob caught up in the anti-pagan hysteria of the day, an at least partly political religious hysteria shared by Christians, Jews, and pagans alike; Alexandria itself was caught up in a power struggle between political and religious factions. The mob of extremists who dragged Hypatia from her carriage, stripped and then tortured and killed her by tearing off her skin with broken roof tiles, and then defiled her body were inspired by their partisanship with theocratic bishop Cyril to kill this pagan philosopher also admired by many Christians, this mathematician and astronomer (then often equated with sorcerer), this woman who dared teach men, this friend of Cyril’s rival Orestes, civic leader of Alexandria. According to Hypatia scholar Micheal Deakin, “Cyril was no party to this hideous deed, but it was the work of men whose passions he had originally called out. Had there been no [earlier such episodes], there would doubtless have been no murder of Hypatia.”*

Learn more about the great Hypatia of Alexandria:

Hypatia: Mathematician and Astronomer – by Michael Deakin for Encyclopædia Britannica

‘Hypatia of Alexandria‘ – by J J O’Connor and E F Robertson for the School of Mathematics and Statistics of thr University of St Andrews in  Scotland website.

~ Ordinary Philosophy is a labor of love and ad-free, supported by patrons and readers like you. Please offer your support today!

* Versions of this piece were originally published here at Ordinary Philosophy one and two years ago. As you can see from past comments, some took issue with my characterization of Hypatia’s murder as, at least in part, inspired by anti-pagan and anti-science religious extremism which in turn, could make her appear as an ideological martyr. One of the most impassioned critics of this piece accused me of perpetuating a partisan and ideologically-motivated distortion created by the anti-clerical John Toland in 1753. This critic insisted that Hypatia’s death was entirely the result of politics, not religion, and therefore any retelling of her death that even hints at religious persecution is likewise just more myth-making. I respond, in brief, that one: the circumstances surrounding her death are still the subject of much scholarly debate given the paucity of contemporary sources and two: that it seems ahistorical to separate out the political from the religious. In Hypatia’s time and indeed, throughout much of history, the religious and political were intertwined and thus, impossible to consider as fully separate issues. I do agree, however, that modern accounts of Hypatia’s murder tend to emphasize the religious and anti-science persecution elements without enough consideration of the political aspects, which is why I include a variety of resources and articles for the reader to consider. I’ve also edited it lightly for clarity, and removed a section in which I drew a parallel between the circumstances which led to Hypatia’s violent death and a timely political news story.