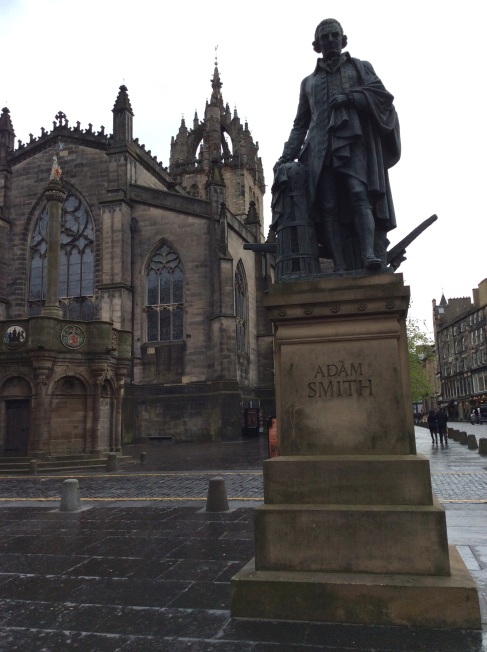 Adam Smith statue on the Royal Mile in Edinburgh, Scotland

Smith was baptized and perhaps born on June 5th, 1723 in Kirkcaldy, Scotland (a fishing village near Edinburgh) and died on July 17, 1790 in Edinburgh. He attended university at Glasgow and Oxford and found the former intellectual milieu more stimulating by orders of magnitude. Glasgow and Edinburgh were vigorous centers of Enlightenment thought in philosophy, natural philosophy (as the sciences were then known), linguistics, history, political theory, mathematics, and more. David Hume, Adam Smith, and their fellow leaders in the Scottish Enlightenment joined the ranks of this philosophical tradition’s greatest and most influential thinkers.

Like pretty much everyone who’s interested at least in the basics of economic theory, I’d heard a lot about The Wealth of Nations, Smith’s treatise on political economy, and had read excerpts as well as a lot of commentary on it. The Wealth of Nations is considered a foundational theoretical work on capitalism and therefore, Smith is regarded as a key figure in economic theory. But when I returned to university a few years ago to study philosophy, and when researching the life and ideas of Hume and his contemporaries for my aforementioned project, I spent more time with Smith’s moral philosophy. So I’ll focus this aspect of his thinking here. After all, this was his main arena of inquiry: he was not an economist, but a professor of moral philosophy at Glasgow. His Theory of Moral Sentiments was, and still is to a lesser consent, respected as a major work in moral philosophy. 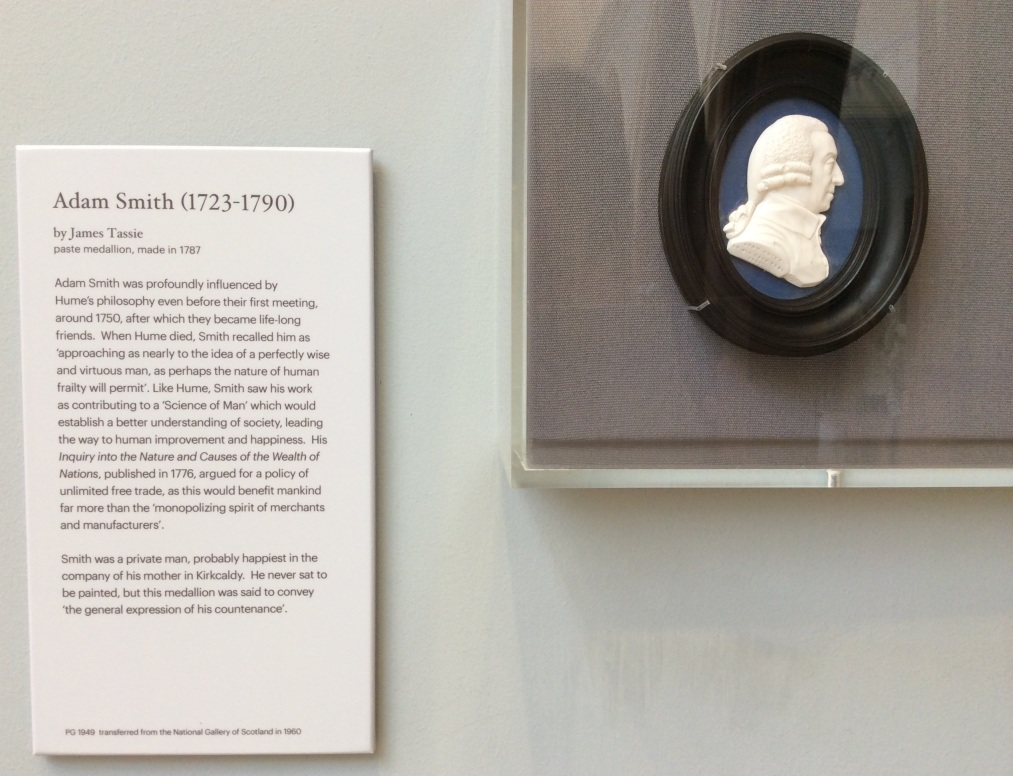 Portrait medallion of Adam Smith by James Tassie at the National Portrait Gallery in Edinburgh, Scotland.

Smith’s Theory of Moral Sentiments merges from a sort of compendium of elements of moral philosophy, in which Smith fuses what he considers the best and most coherent elements of moral philosophy into one compelling system. In it, one recognizes Humian sentimentalism, Kantian-type reason-based morality (Immanuel Kant’s work on this topic came after Smith’s, though the men were direct contemporaries), consequentialism, and Aristotelian virtue ethics. Like Hume, Smith thinks that the emotions play a central role. Before Hume, morality was widely considered to be primarily a matter of reason, and morality required us to quash our emotions, or as Hume put it, passions, because human are naturally and by default selfish, greedy, profane, lazy, and in myriad others way fallen creatures. Hume, however, does not agree. He believes that human beings naturally identify with the pains and joys of others, internalizing them and causing us to want to ameliorate their circumstances, and it’s this direct emotional response that drives the moral sense. Smith largely agrees, but not wholly. He also stresses the importance of sympathy (close to the sense that we’d usually now mean empathy) in making moral judgments. Smith explains that the moral agent is like an impartial spectator who participates in the daily lives, sufferings, and joys of our fellow human beings through our emotional response to their situation.

Adam Smith portrait by John Kay from 1790 (the year of Smith’s death), at the National Portrait Gallery, Edinburgh

But Smith also believes that sympathy (empathy) is not enough: our sympathies can and should be corrected by reason since our emotional responses can become inappropriate to the situation, corrupted by ignoble impulses such as greed, ambition, selfishness, and so on. An impartial, uncorrupted spectator would not consider indifference or cruelty, for example, as proper emotional responses to the plight of others. (I see shades of John Rawl’s ‘veil of ignorance‘ here.) One way to help us maintain moral ‘propriety’, as Smith put it, is to apply reason, and one way our reason can help us judge whether our moral sentiments are correct is to consider the consequence of actions we feel inclined to do. While the consequences of our actions don’t determine their rightness or wrongness as they do in consequentialist moral theories, they are an important consideration and in some cases, such as those in which human life hangs in the balance, they should take precedence. And finally, Smith agrees with Aristotle that we can’t rely on a pre-determined, reason-derived, emotionally-detached set of inflexible moral principles to differentiate right from wrong, good from bad, as Kant would have it. Rather, we naturally recognize and respond to virtue when we see it. We admire its beauty and goodness and have the desire to emulate it. Aristotle sees virtue as a perfect balance between opposing qualities in the same sphere: courage is the virtue on the right part of the spectrum between cowardliness and recklessness; temperance between licentiousness and insensibility; friendliness between obsequiousness and cold indifference. Smith likewise stresses the importance of balance in our moral character but focuses more on attuning our sympathies so they are in propriety, thereby driving us to act in the kindest, most honest, and fairest way towards one another as a matter of course. 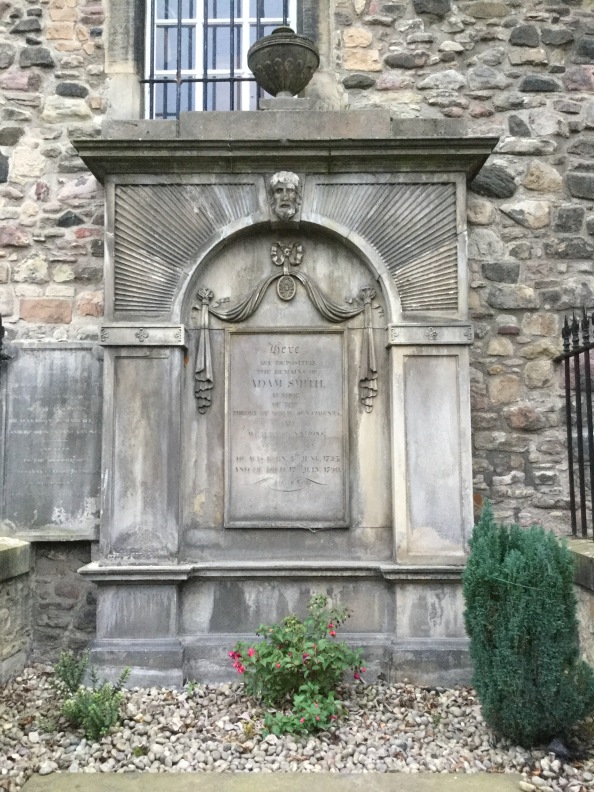 This is only a very short summary of Smith’s moral philosophy by one who not an expert on Smith’s life and thought. To learn more about the great philosopher and economist Adam Smith from those who are, and for more about the philosophical traditions that influenced him and which he influenced in turn, see:

Enlightenment ~ William Bristow for The Stanford Encyclopedia of Philosophy

Moral Sentimentalism ~ Antti Kauppinen for The Stanford Encyclopedia of Philosophy

The Problem With Inequality, According to Adam Smith ~ Dennis C. Rasmussen for The Atlantic

The Real Adam Smith ~ by Paul Sagar for Aeon

The Theory of Moral Sentiments ~ Adam Smith, first published in 1759

*A version of this piece was previously published in Ordinary Philosophy