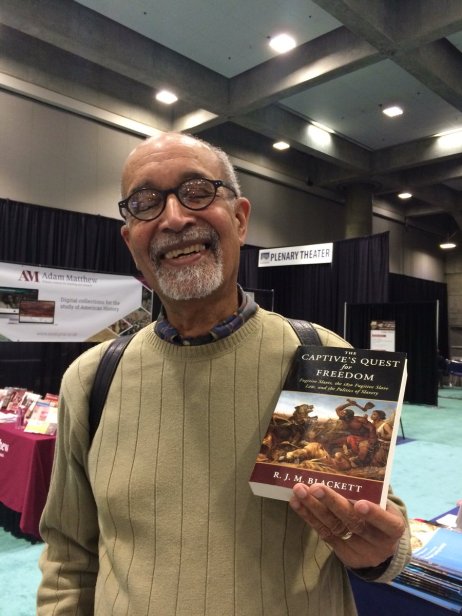 As I go on one of my regular hill walks, I listen to Daniel N. Gullotta interview historian Richard Blackett for the Age of Jackson podcast. They discuss Blackett’s work on the history of slaves’ fleeing oppression from their native states in the antebellum United States of America. My recent dissertation work had led me to Blackett and I’m so glad it has, what an accomplished scholar! I’m so excited to delve further into his work in the coming weeks.

As I listen to this podcast discussion, I can’t help but be reminded of today’s migrants fleeing to American shores to escape danger and the lack of opportunity in their native countries. Though it was illegal to run away from slavery and for free people to assist them in doing so, I think most of us would now say these self-liberated people did no wrong even as they broke the law. What will we say looking back (perhaps decades from now, perhaps less) on harsh treatment of families and individuals fleeing death, destruction, and systemic robbery of cartels and gangs today? And how do we square a ‘zero-tolerance policy’ and the claim that all of these migrants entering without papers and outside official ports of entry are ‘illegal immigrants,’ when we have laws and practices that protect people seeking asylum? After all, asylum seekers are those fleeing dangers that are too immediate to wait in legal limbo, or can’t afford the cost of going through the process, or who have experienced nothing from government officials besides oppression or neglect. And how will we weigh the fact that these cartels and gangs exist in significant measure because of the black markets that inevitably spring up from U.S. drug prohibitions? After all, as history has revealed this happens with prohibitions of desirable commodities without any exceptions (that I know of). And to this, we add the fact that the U.S. citizenry provides such a vast and eager customer base?

Does the moral duty of parents to protect and provide for their children, and of individuals to preserve their own lives, take precedence over the laws of their own and others’ countries? Are we justified in prosecuting, fining, and otherwise harshly treating people who make this moral choice to come here for the reasons described above? After all, our country is founded on the idea that the right to life, liberty, and the pursuit of happiness is sacrosanct. If we let that go, we are no longer the United States of America as derived from the Declaration of Independence of 1776 and embodied in the Constitution of 1787. We’ll have become something else.

It’s certainly true that from the outset, our government and the American people have often betrayed the higher principles contained in those founding documents (slavery, Jim Crow, turning away Jewish asylum seekers fleeing the Nazis, the internment of Japanese Americans, protection of business interests at the expense of working people), but I believe we remain that country, and a great one, only so long as we wrangle within and amidst ourselves to do better. And it can be argued that it’s up to these migrants to stay in their own countries and reform them, starting a revolution if necessary. But how many of us would require it of ourselves when we know this may very well mean sacrificing the lives of our children, let alone ourselves, in the meantime?

Perhaps we should make our borders open to ‘willing workers,’ as Ronald Reagan liked to call migrants such as these, thereby forcing their governments to have to do better by their people if they’d like them to stay. After all, the people with the drive and energy to get themselves here, who vote for freedom and opportunity with their feet since they’ve been handed nothing on a silver platter, are the very people who embody those values that working Americans, immigrants and pioneers, runaways from slavery and oppression and the descendants of all of these, pride ourselves on.