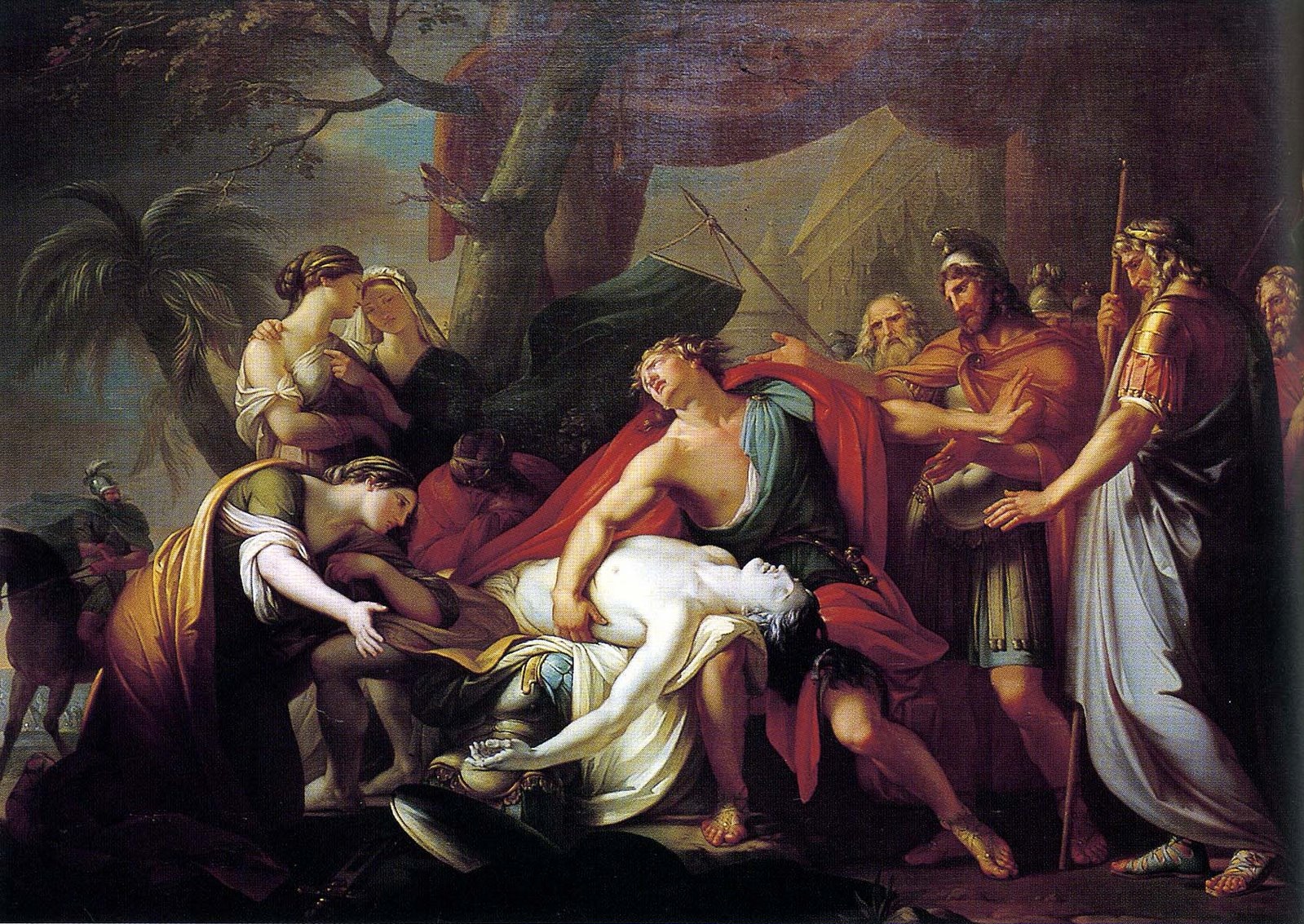 Queer love lies at the heart of the Iliad as a work of art.

This was not the claim of my fall quarter Western Culture prof, though he certainly tried to explain the nature of the relationship between Achilles and Patroklos, and how that fit into Greek ideas of manhood, and how it fit (or didn’t) with our own ideas of sexuality.  I don’t think he used the word “queer,” but he did emphasize that to call those two heroes “a gay couple” or “gay lovers” would be both anachronistic and inattentive to the complexities and resonances of the intimacy between them.  Or something like that.

But “queer” as a word that points to a body of scholarly theory and “queer” as a word reclaimed by folk whose intimate relationships, whose inner and intertwined lives, don’t fit neatly within simple binaristic categorizations – that’s a fitting enough word for a consideration of Patroklos and Achilles and the Iliad and the canon and the culture of the 1980s.

What struck me on this re-read of the Iliad was the distinctive portrayal of Achilleus’s grief.  Many warriors fall in these few days of battle, and many Greek heroes, and Trojan heroes too, lose men dear to them – perhaps as dear, indeed, as Patroklos was to Achilles.  Warriors on both sides are smitten with sorrow to see their brothers in arms fall, and warriors on both sides fight fiercely to retrieve the bodies of their fallen comrades – though no battle rages as fiercely or as long as the battle for Patroklos’s body.

And when that broken body is returned to the tents of Achilles – there grief pours forth from different, deeper streams. It is all the grief of brothers in arms, and more.  It is the grief of a lover for not only the life, but the very body, of his beloved.

Achilleus’s anguish over the broken body of Patroklos is compelling.  In a way, I suppose, it is echoed in Priam’s grief as he later pleads for Hector’s body.  But I think rather Priam’s grief harmonizes with Achilleus’s sorrow – it is grief in a different register, or maybe a different key altogether, and they share but one note in common between them:  an unfathomable tenderness toward the body of their own fallen warrior, beloved, though loved in different ways.

Here is how Achilles mourned, and what he feared:

Peleus’ son led the thronging chat of their lamentation
and laid his manslaughtering hands over the chest of his dear friend
with outbursts of incessant grief. As some great bearded lion
when some man, a deer hunter, has stolen his cubs away from him
out of the close wood; the lion comes back too late, and is anguished,
and turns into many valleys quartering after the man’s trail
on the chance of finding him, and taken with bitter anger;
so he, groaning heavily, spoke out to the Myrmidons….
So speaking brilliant Achilleus gave orders to his companions
to set a great cauldron across the fire, so that with all speed
they could wash away the clotted blood from Patroklos….(XVIII, 316-323, 343-345)

The poem goes on to describe in detail the tender care Achilles and his companions take in cleaning and preparing Patroklos body for his eventual funeral.

Yet no mortal effort can overcome decay. The body of the beautiful, the beloved one, his spirit shorn from the world of the living, will see corruption, Achilles fears, before he has a chance to return from avenging Patroklos’s death.  And he is not resigned.

His mother cannot comfort him, but she can help him.

Thetis, the water nymph, the immortal, does two things for her son in his grief:  she commissions for him immortal armor from the Olympian forge of Hephaistos, and when she returns with the enchanted shield – that immortal aesthetic object, art that literally captures the full round of earthly life, a frieze of figures in constant motion, the whole world of human meaning and meaning-making to live on and on past the death of the hero who will bear it on his shoulders – she gives her son what aid she can in caring for the body of his friend.

Achilles, after receiving the armor, tells his mother,

I am sadly afraid,
during this time, for the warlike son of Menoitios
that flies might get into the wounds beaten by bronze in his body
and breed worms in them, and these make foul the body, seeing
that the life is killed in him, and that all his flesh may be rotted.”(XIX, 23-27)

Achilles’ love for Patroklos does not transcend the burdens of embodiment.  This a feature that some other readers, maybe from another time or maybe now, might see as a great flaw. But in Achilles I see a mother’s son grieving for his lover, and like his mother, I find in this no cause for reproach.

In turn the goddess Thetis the silver-footed answered him:
“My child, no longer let these things be a care in your mind.
I shall endeavor to drive from him the swarming and fierce things,
those flies, which feed upon the bodies of men who have perished….
Go then and summon into assembly the fighting Achaians,
and unsay your anger against Agamemnon, shepherd of the people,
and arm at once for the fighting, and put your war strength upon you.”
She spoke so, and drove the strength of great courage into him;
and meanwhile through the nostrils of Patroklos she distilled
ambrosia and red nectar, so that his flesh might not spoil. (XIX, 28-39)

Ambrosia is an Olympian gift, the drink of the immortals – but that was not the gift we talked about when we discussed this work in reading group in the 1980s.  Instead, we talked about that shield, about how the poet celebrated art and storytelling as something immortal, with the shield of Achilles a stand-in for the poet’s work itself: a made thing through which life immortal moves.  That was our focus:  understanding the meaning of the shield of Achilles.

But the years during which Stanford freshmen were asked to read the Iliad were the very years when AIDS was ravaging queer communities, sweeping away queer lives (and hemophiliacs’ lives, and needle-sharing heroin addicts’ lives and unsuspecting partners’ lives) in an ever-advancing tidal wave of utter destruction.  Imagine the keening grief of Achilles magnified by the millions.  Imagine the great immortal shield, the Solace of Art, clattering to the ground, unfinished and undone, because the artists – the writers, the painters, the set designers, the actors, the sculptors, the dancers, the poets, the singers, the writers of songs – were literally wasting away.  Often they were mourned by the friends, their comrades in arms, their partners in love.  But often they died, as Patroklos did, and Achilles too, far away from home – disowned, despised, abandoned. 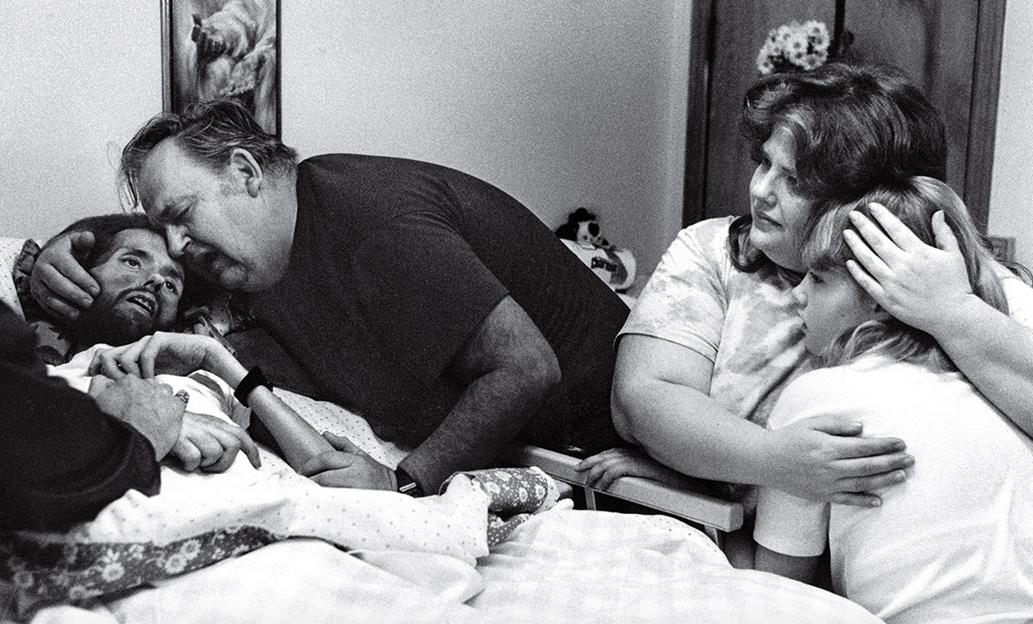 We were reading this text against that background, but I’m not sure how many of us made the connection.  At the time, I did not. Seeing they do not see…

Now, though, every time I teach the second half of the U.S. history survey, I talk at length about the AIDS crisis.  I talk about the murderous neglect of the Reagan administration, and the vile hatefulness pouring forth from many key leaders on the religious Right, who called AIDS a punishment from God and a fate that gays deserved.  I talk about how many in mainstream American culture, out of prejudice and fear, had turned their backs on their own fellow citizens, and how AIDS activists and allies incessant advocacy and hospice training and political work and lobbying and protesting and constant painful heartrending public appeals to shared humanity and common decency combined to force the nation to take heed, to take care, to pour research and resources into finding a cure, a treatment, a ray of hope.

I tell my students that in the 1980s and 1990s, AIDS was seen as a sure death sentence, and many saw it as a sentence that its sufferers deserved.  But now there is preventative treatment, and treatment for symptoms, and maybe even hope of a cure.  And on the final exam, every semester, I have one or two students who tell me some version of, “I’m gay [or, I’m queer, or, I’m a LGBTQ ally] and I didn’t know anything about this history. Thank you so much for teaching this.  We didn’t cover the AIDS crisis in high school.”

And at first I think, How could you not cover the AIDS crisis in a high school U.S. history class?  On the other hand, how could you begin do it justice?

And who am I to judge?  I read Achilles mourning for Patroklos, lover for beloved, and my thoughts turned to abstractions like Art and Immortality, Great Books and Canonicity, when matters of much greater import were at stake.

Learn, and live – live.  There were too many who did not.

This piece was originally published at the Society for U.S. Intellectual History Blog

L.D. Burnett received her Ph.D. in Humanities (History of Ideas) from the University of Texas at Dallas (2015), where she is currently employed as the 2017-2018 Teaching Fellow in History. Her book, Canon Wars: The 1980s Western Civ Debates at Stanford and the Triumph of Neoliberalism in Higher Education, is under contract with University of North Carolina Press. (Bio credit: S-USIH)