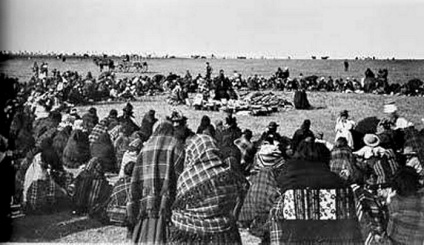 In my recent readings in the history of the Lakota and other native peoples of America’s Great Plains, I’ve been struck by descriptions of their giveaway ceremonies. They remind me of another practice I had learned of before, and which I believe is more generally familiar: the potlatch, a related custom practiced by Native Americans of the Northwest. Potlatches generally came with strict expectations of giving the gifts away again promptly, and then some. These exchanges cemented power relations and were often aggressively competitive; they’re better understood as tactical, sociopolitical transactions rather than simple acts of generosity.

Lakota giveaway ceremonies, however, are much more altruistic in the sense that we commonly understand the term. The gifts are given freely with no expectation of payback; in fact, the resulting impoverishment itself is a badge of honor. That’s why I chose a quote by Sitting Bull, the great Hunkpapa Lakota chief, to introduce this essay. He once illustrated the contrast between Lakota and white attitudes towards property by telling how his poverty aroused the admiration of his people, rather than the disdain most white people feel toward such a state. To those who share Sitting Bull’s impression of the invaders of his homeland, the driving need to amass and own material goods can be a sign of spiritual poverty…. Read the written version here