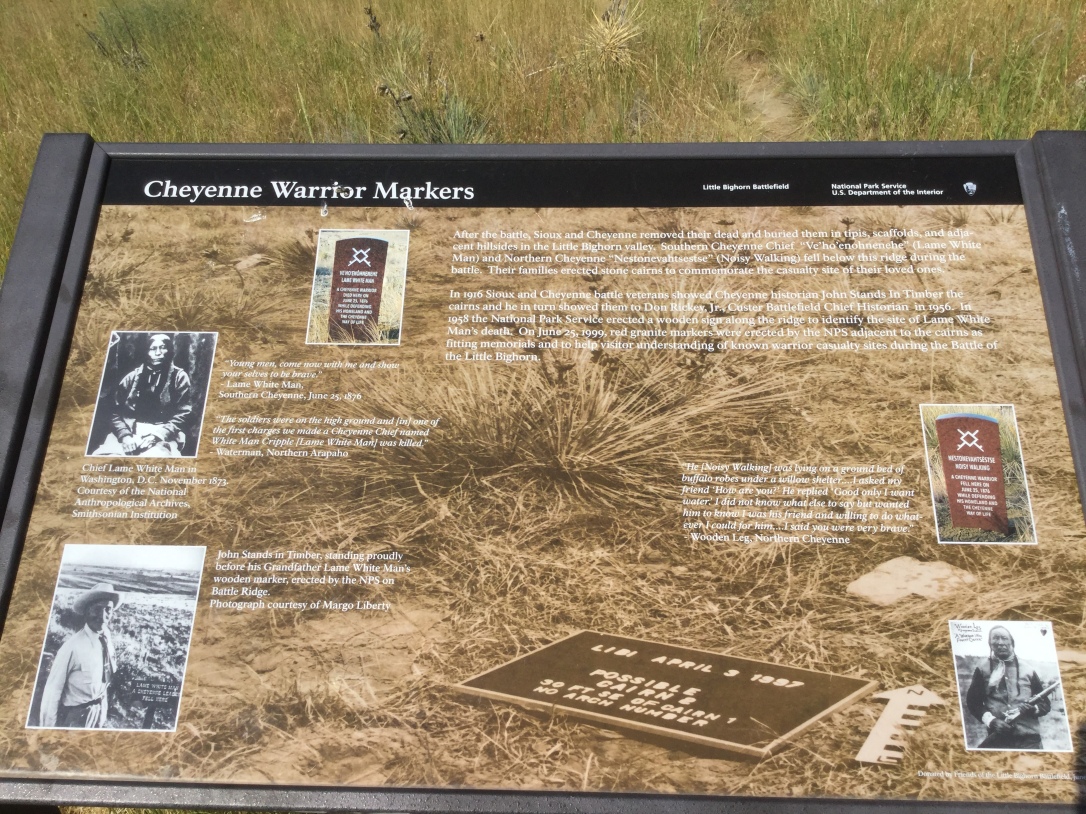 Cheyenne Warrior Marker historical placard, Little Bighorn Battlefield Monument, NPS. I’m glad to see that there’s now public acknowledgement that other human beings died here that day besides U.S. soldiers. Soon, I hope, that more of the Oglala, Hunkpapa, Miniconjou, Arapaho, Cheyenne, and other tribe members, their slain warriors and slain women and children as well, will be specifically remembered too, as far as we can identify them. There’s a general remembrance in the Indian Memorial, but it would be a very good thing, I think, to see more of the victims named if possible. The attack began, after all, with U.S. soldiers firing into the lodges of families, regardless of the collateral damage (that pragmatic military term to ease the conscience of war-makers), the lives of noncombatants that would necessarily be lost.

As I continue to explore the Little Bighorn Battlefield the next morning and afternoon, I gain a much clearer idea of how the drama played out. I had read many accounts of the battle, but seeing the lay of the land helps me visualize it more clearly. For example, it all happened over a much larger area, and over a longer period of time, than I had conceived.

Here are just a few more images of the many, many more things I see and learn here this second day at the Little Bighorn battlefield:

Headstones marking where U.S. cavalry soldiers fell at the Battle of the Little Bighorn, June 25-26, 1876. The 7th cavalry was hopelessly outnumbered; later, Native American expressed their amazement that George Armstrong Custer’s 7th attacked the encampment given that it was so large, about 7,000 in all, including about 2,000 warriors. Though it was later revealed that Custer ordered the attack because he didn’t want the encampment to escape, still, it was suicidal to lead his men to attack such a large force before the other approaching U.S. troops arrived.  So it the question remains unanswered, at least satisfactorily: was it just hubris on his part, or dismissiveness of Native American prowess in war, or ignorance, or some of each? The debate continues…. 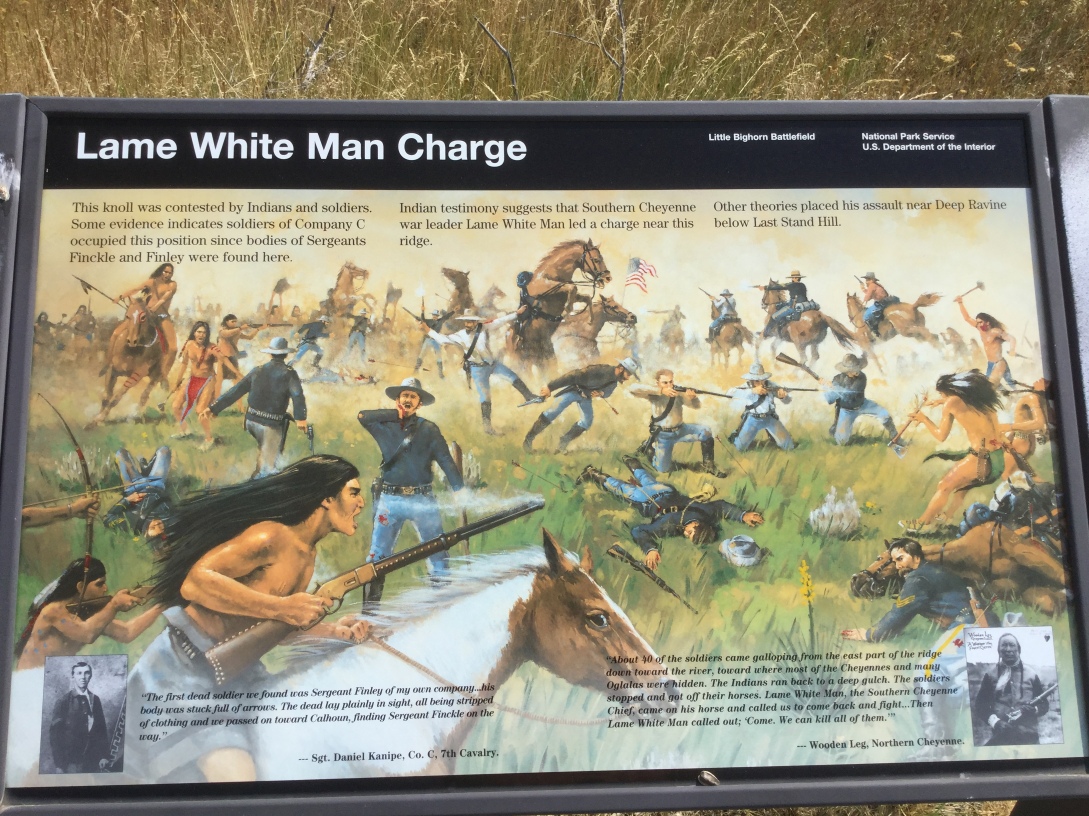 John Stands in Timber, Lame White Man’s grandson, was one of those who helped the National Park Service to identify and honor the sites of fallen warriors

Here, about 7,000 people banded together near the banks of the Little Bighorn River in 1876 in a bid for freedom

Above: Deep Ravine, through which Crazy Horse led a charge towards Land Stand and Calhoun Hills from the Little Bighorn River.

Site of Major Marcus Reno’s retreat, about five miles from Last Stand Hill, Little Bighorn Battlefield. He attacked the encampment from one direction, Custer from another, and his detachment of soldiers was the first to start firing 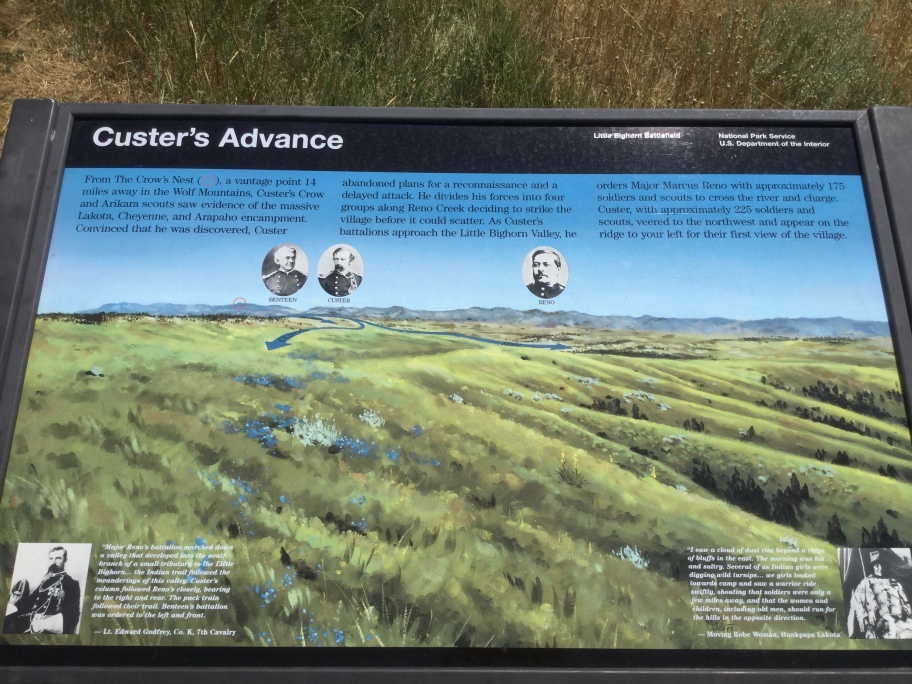 Black Elk quote on the wall of the Little Bighorn Battlefield National Monument museum. Black Elk, a Northern Cheyenne, was a young teenager when he fought in the battle here, and he went on to become an important witness to what occurred here. This quote is from Black Elk Speaks, poet and author John G. Neihardt’s account of Black Elk’s conversations about, among many things, this battle and of his life as a visionary and holy man. It was published in 1932, when Black Elk was in his late 60’s. Black Elk’s life was a fascinating one, and I’ll continue to follow him in this series. To be continued…

Many times throughout my life, especially as a child and teen, I had heard of the battle at the Little Bighorn, and shrugged my shoulders each time. I was not then inspired to learn more about it: it seemed to me like just one more of the countless times human beings have slaughtered each other for what were probably completely insufficient reasons. Why learn the tedious details?

I’ve only recently begun to make a serious study of the history of the Native Americans of the Great Plains and their encounters with the encroaching peoples of the United States and Europe. What I’ve learned is disturbing, amazing, complex, and heart-wrenching. Learning about this battle, it turns out, is not the least bit tedious. It’s dramatic, tragic, fascinating, and invaluable for understanding this very important and formative period in American history, and continues to be very relevant today. Human beings are still wasting lives on battlefields all over the world, and Americans are still dismissive of and doing wrong to the original inhabitants of the Plains, as the recent Dakota Access Pipeline debacle illustrates.

*Listen to the podcast version here or on Google Play, or subscribe on iTunes