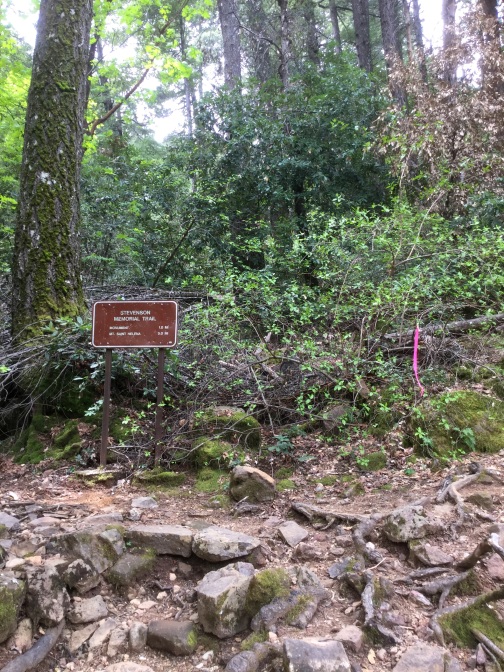 Stevenson Memorial Trail to the summit of Mount Saint Helena. The trailhead is about nine miles north of Calistoga, CA

My sister Therese and I hiked the lovely trail to the summit of Mount Saint Helena on April 22nd, 2017. This hike was Therese’s idea, as are so many of the best ones; thanks, dear sister!

The Stevenson Memorial Trail winds five miles to the summit (one way), about 1,800 feet of climbing all told to the 4,343-foot peak. The entrance to the trail led into dreamy forest, with branches highlighted here and there with fluttering pink plastic ribbons to guide the trail runners in an organized event held here that day. There was a table set up in the parking lot off Highway 29, with drinks, treats, and cheers available for the tired athletes.

On our way up, we discovered the monument mentioned in the sign at the foot of the trail, a handsome little tribute to the memory of Robert Louis Stevenson and his wife placed here exactly 94 years ago on May 7th, 1911 by the Napa Club. Stevenson and his new wife Fanny Van de Grift stayed here for an adventurous honeymoon on the cheap, living for two months in an abandoned miners’ cabin. Stevenson, author of Treasure Island, The Strange Case of Dr Jekyll and Mr Hyde, and A Child’s Garden of Verses, was seeking adventure, new fodder for his writing which he feared was lagging due to his chronic poor health, and a climate in which his congested lungs could do their best. And he was here for Fanny: he had met her years earlier and fell in love. They had to wait to join their lives together until the divorce from her abusive husband came through, and when it did, he left his native Scotland to join her in her home country. 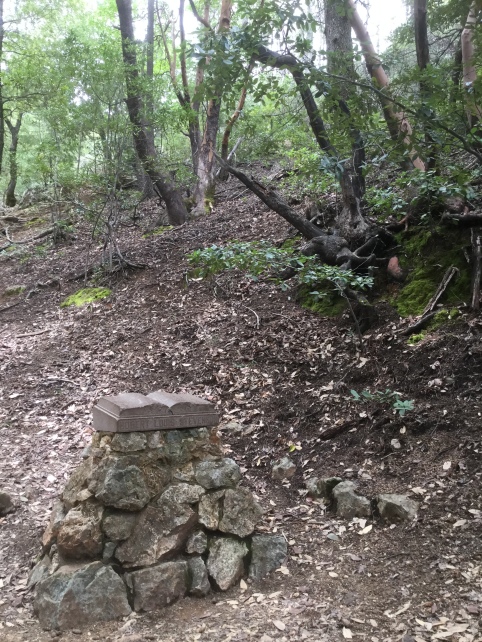 The engraved marble tablet on the stone monument reads:

‘This tablet placed by the Club Women of Napa County
Marks the site of the cabin occupied in 1880 by Robert Lewis Stevenson
And bride, while he wrote The Silverado Squatters.

“Doomed to know not winter only spring,
A being trod the flowery April blithely for awhile,
Took his fill of music, joy of thought
And seeing and stayed and went
Nor ever ceased to smile.” – R.L.S.’

It was a beautiful hike, the first mile or so lovely and shaded on the narrow switchback trail, the last four mostly fire roads, though we found a couple of steep little shortcuts. The view from the top was spectacular, though not as far as it might have been on a less cloudy day. The wildflowers were lovely too, and the pine and madrone forests (and plentiful poison oak) very much as Stevenson describes them in The Silverado Squatters. It’s the story of his travels to California and his time here in Napa County with Fanny, which is available to read in full online. It’s an amusing and charming story, though the way he describes some Jewish acquaintances is disconcerting unless you keep in mind the prejudices of the time. 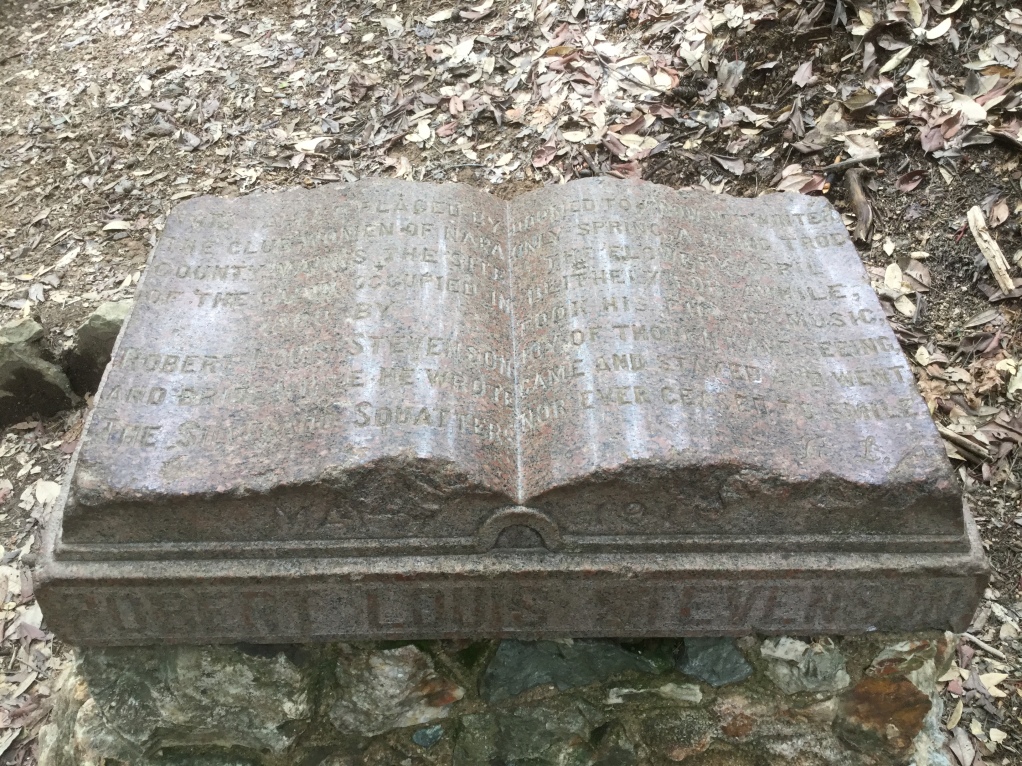 Panorama of the view from the peak of Mount Saint Helena, CA, 2017 by Amy Cools