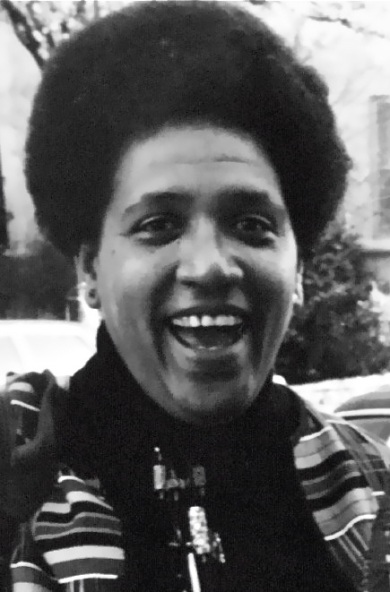 Poet and civil rights activist Audre Lorde was born on February 18, 1934. In remembrance of this powerful and eloquent woman on her birthday, I’ll share the bio I found at the Poetry Foundation:

‘A self-described “black, lesbian, mother, warrior, poet,” Audre Lorde dedicated both her life and her creative talent to confronting and addressing the injustices of racism, sexism, and homophobia. Her poetry, and “indeed all of her writing,” according to contributor Joan Martin in Black Women Writers (1950-1980): A Critical Evaluation, “rings with passion, sincerity, perception, and depth of feeling.” Concerned with modern society’s tendency to categorize groups of people, Lorde fought the marginalization of such categories as “lesbian” and “black woman,” thereby empowering her readers to react to the prejudice in their own lives. While the widespread critical acclaim bestowed upon Lorde for dealing with lesbian topics made her a target of those opposed to her radical agenda, she continued, undaunted, to express her individuality, refusing to be silenced. As she told interviewer Charles H. Rowell in Callaloo: “My sexuality is part and parcel of who I am, and my poetry comes from the intersection of me and my worlds… [White, arch-conservative senator] Jesse Helms’s objection to my work is not about obscenity…or even about sex. It is about revolution and change.” Fighting a battle with cancer that she documented in her highly acclaimed Cancer Journals (1980), Lorde died of the illness in 1992…. Read more about Audre Lorde and her poetry here