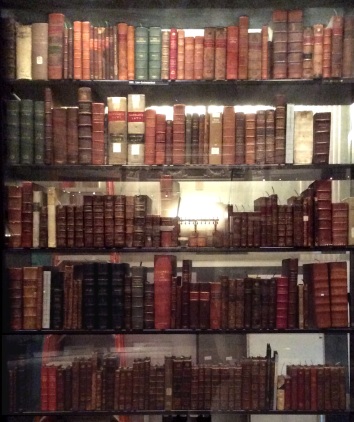 A few years after I graduated from college, when I was short on cash, short on space, and short on hope that some significant portion of my days might ever again be spent in reading and writing and thinking about something beyond my immediate material circumstances and familial duties, I made a decision that I have wished many times to take back: I sold almost all of my textbooks. Not just the overpriced and (for me, anyhow) under-studied behemoth from Intro to Econ, nor my well-used but no longer useful grammar and exercise book from French I and II – those weren’t the only texts I culled from my little library.

I gathered up Robert Lowell and Alice Walker, Edmund Spenser and Harriet Beecher Stowe, Lucretius and Virginia Woolf, Lorraine Hansberry and Aristotle, Montaigne and Nietzsche, Flaubert, Boethius and Baudelaire, and many others besides – most of them authors I had never so much as heard of before I set foot on the Stanford campus. Norton critical editions, and anthologies of fiction and poetry, Penguin Classics, and mass market paperbacks I had acquired for classes — when I had been compelled to choose between buying my books and, say, eating more than one meal a day for a few weeks, I chose the books. I don’t regret those purchases.

Still, I wish I hadn’t sold them. Because what I let go of when I let go of those books was not just a visible reminder of lean years and tough choices. I also let go of my own history as a reader, as a learner – all the notes and exclamations and questions I had scrawled in the margins, the asterisks, the dog-ears, the passages underlined two or three times because they rang true to my young heart or my old soul.

But I didn’t sell all my books. Among the texts I kept were Augustine and Shakespeare, Dickens and Faulkner, Spoon River, Thomas Wyatt, Jane Austen and George Eliot and Thackeray so deft and droll, Dante and Cervantes and a few other stragglers besides, including Miguel de Unamuno.

Before I was an English major, I was a Spanish major, and I had been introduced to Unamuno in the second half of the Spanish lit survey at the end of my freshman year. Alas, the two volume anthology we used in the survey, with its excerpt from Unamuno’s beautiful Vida de Don Quijote y Sancho, was among the books I sold. But the standalone volume of Del sentimentio trágico de la vida – that I kept.

Unamuno’s existential anguish and his quest to find or fashion some hope in the face of the miserable fact of our mortality struck a chord with me. I might not have understood everything he was arguing — or arguing against– on my first read through, but I understood that.

In the face of certain disaster, what do we do?

That question, that problem, has been much on my mind lately, particularly as it relates to the state of higher education, the fate and future of the university as an institution or even as an idea.

What do we do?

Does it even matter?

Thinking of those questions, I was reminded this morning of a passage in Unamuno where he quotes Sénancour – somewhat disapprovingly, as it turns out, a fact lost on me the first time I read the chapter. Here is the quote, and my best attempt at a translation of it:

Man is perishable. That may be. But let us perish resisting, and, if Nonexistence is what awaits us, let us not act in a way that would make our fate seem just.

Unamuno, as it turns out, rejected Sénancour’s willingness to allow that “le neant” was our collective end. He would not surrender to nihilism. Still, Unamuno’s ensuing development of his own argument for faith – faith not instead of doubt but rooted in doubt and flowing from doubt — was a means of doing precisely what Sénancour urged, without conceding the rationale for it. Instead, Unamuno inverted that rationale, saying in effect, Let us resist despair together, and so perish not.

I sold my old books in a time of great financial distress and profound personal despair (the two were connected, as they often are). The paltry sum I received for them just exacerbated my sense of sorrow and loss. But at the time I didn’t know what else to do. I did know, however, that no matter how much of my little library I felt that I had to give up, there remained a portion that under no circumstance would I willingly surrender.

Somehow I knew that if I had let those last few books go, I would have gone right with them.

Let us resist perishing. But if we must perish, let us perish resisting. That’s not an ethos they teach in Intro to Econ, not even at Stanford – perhaps especially not there, fons et origo of Silicon Valley. Economic arguments for the value of a humanistic education will not save the humanities, and we should stop making them. The value of what we study, of what we teach and what we learn, is that such learning can help keep the human spirit alive. That may be the surest ground upon which we can stand. If that ground at the very heart of the university is lost, whatever still remains will hardly be worth keeping, whether or not we ourselves are by some miracle still standing.

~ L.D. Burnett received her PhD in Humanities/History of Ideas from the University of Texas at Dallas in Fall 2015. She has a B.A. in English from Stanford University. Her book, Canon Wars: The 1980s Western Civ Debates at Stanford and the Triumph of Neoliberalism in Higher Education, is under contract with University of North Carolina Press.