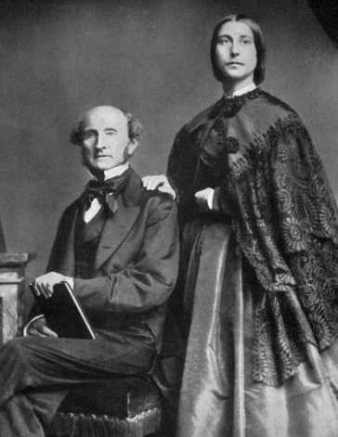 One of my very favorite ideas in political philosophy is John Stuart Mill’s ‘marketplace of ideas’ (though he didn’t phrase it this way himself): that the free, open, and vigorous exchange of ideas in the public square does more to further human knowledge than anything else. But not only has his comprehensive and to my mind, absolutely correct defense of free speech in his great work On Liberty had an immense and beneficial influence on the history and theory of human rights, he was admirable in myriad other ways as well:

‘Mill believed in complete equality between the sexes, not just women’s colleges and, someday, female suffrage but absolute parity; he believed in equal process for all, the end of slavery, votes for the working classes, and the right to birth control (he was arrested at seventeen for helping poor people obtain contraception), and in the common intelligence of all the races of mankind… all this along with an intelligent acceptance of the free market as an engine of prosperity and a desire to see its excesses and inequalities curbed…. Mill was an enemy of religious bigotry and superstition, and a friend of toleration and free thought, without overdoing either…’ ~ Adam Gopnik, from his article and book review ‘Right Again‘, 2008

‘The son of James Mill, a friend and follower of Jeremy Bentham, John Stuart Mill (1806-1873) was subjected to a rigorous education at home: he mastered English and the classical languages as a child, studied logic and philosophy extensively, read the law with John Austin, and then embarked on a thirty-five career with the British East India Company at the age of seventeen. (He also suffered through a severe bout of depression before turning twenty-one.) Despite such a rich background, Mill credited the bulk of his intellectual and personal development to his long and intimate association with Harriet Hardy Taylor. They were devoted friends for two decades before the death of her husband made it possible for them to marry in 1852; she died in Avignon six years later. Mill continued to write and to participate in political affairs, serving one term in Parliament (1865-68). The best source of information about Mill’s life is his own Autobiography (1873). Mill

Philosophically, Mill was a radical empiricist who held that all human knowledge, including even mathematics and logic, is derived by generalization from sensory experience. In A System of Logic, Ratiocinative and Inductive (1843) he explained in great detail the canons for reasoning inductively to conclusions about the causal connections exhibited in the natural world.

Mill’s moral philosophy was a modified version of the utilitarian theory he had learned from his father and Bentham. In the polemical Utilitarianism (1861) Mill developed a systematic statement of utilitarian ethical theory. He modified and defended the general principle that right actions are those that tend to produce the greatest happiness of the greatest number of people, being careful to include a distinction in the quality of the pleasures that constitute happiness. There Mill also attempted a proof of the principle of utility, explained its enforcement, and discussed its relation to a principle of justice. Mill

Mill’s greatest contribution to political theory occurs in On Liberty (1859), where he defended the broadest possible freedom of thought and expression and argued that the state can justify interference with the conduct of individual citizens only when it is clear that doing so will prevent a greater harm to others. Mill also addressed matters of social concern in Principles of Political Economy (1848) and Considerations on Representative Government (1861) and eloquently supported the cause of women’s rights in The Subjection of Women (1869).’

~ from The Philosophy Pages by Garth Kemerling, licensed under a Creative Commons Attribution-Share Alike 3.0 Unported License

~ Ordinary Philosophy and its Traveling Philosophy / History of Ideas series is a labor of love and ad-free, entirely supported by patrons and readers like you. Please offer your support today!