Happy 257th birthday, Mary Wollstonecraft! Here is my other tribute to your memory, a journey I took in your footsteps last year 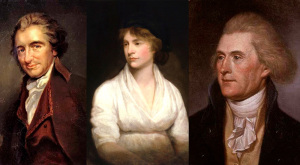 From time to time, I take a trip to some corner of the globe, to explore the lives and ideas of great thinkers in the places where they lived and worked. For this series, I follow in the footsteps of thinkers who are no longer alive, since those who are still telling their own stories. But those who are no longer alive in the body live on in the ideas that they pass on, and in the example they provide for us to follow.

I’m pleased and excited to announce my fourth philosophical-historical themed adventure, this time in Paris, France to follow in the footsteps of Thomas Paine, Mary Wollstonecraft, and Thomas Jefferson at the time of the French Revolution.

The French Revolution, following on the heels of the American Revolution, inspired and horrified many. The financial crisis, caused by over-expenditures in recent wars (including…

One thought on “To Paris, France I Go, In Search of Revolution-Era Thomas Paine, Mary Wollstonecraft, and Thomas Jefferson”