In remembrance of Thomas Jefferson (April 13 1743 – July 4, 1826) on his birthday, here’s the story of my travels last year following his life and ideas 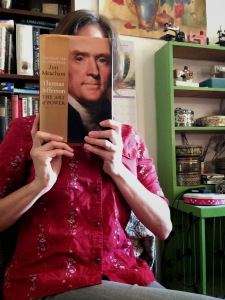 From time to time, I take a trip to some corner of the globe, to explore the lives and ideas of great thinkers in the places where they lived and worked. For this series, I follow in the footsteps of thinkers who are no longer alive, since those who are still telling their own stories. But those who are no longer alive in the body live on in the ideas that they pass on, and in the example they provide for us to follow.

I’m pleased and excited to announce my third philosophical-historical themed adventure, this time in Washington DC, Philadelphia, and various sites in Virginia to follow in the footsteps of…. you may have guessed it… Thomas Jefferson!

Thomas Jefferson was born on April 13th, 1743, and in his long life, he accomplished more than most. He was a founding father of the United…