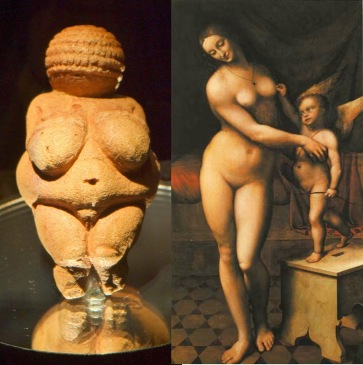 ‘Beautiful’ has always been a battleground in feminist discussions of representation. While it may seem counterintuitive to argue that we should consider more women as beautiful while also arguing that a woman’s capabilities are worth more than her appearance, tackling the rigid definition of beautiful has been important for intersectional feminism. A traditionally beautiful woman is white; women of colour are more likely to be sexualised instead. A beautiful woman is also normally able-bodied. She usually does not appear to be economically below the middle-class, something that is subtly but pervasively inherent in our ideas of the ideal body shape (too slender for manual labour) and the current trend of tanning (demonstrating leisure time and disposable income). A beautiful woman often also has long hair, a delicate face, and big eyes; she is vulnerable, not strong. So renegotiating this limited meaning of beautiful is a powerful act. Great progress has made with it, which should be cause for optimism. However, recent redefinitions are more troubling than empowering.

Beautiful is a woman who has a distinctive personality, one who can laugh at anything, including themselves, who is especially kind and caring to others. She is a woman who above all else knows the value of having fun, and not taking life too seriously. She is a woman that you can trust and count on to brighten your day. She is a woman who can inexplicably make you feel really good just by being around her, and yet brings such great sadness when she is gone.  (10,257 positive votes)

Your smile makes you pretty, your body makes you sexy, only your mind makes you beautiful (5,019 positive votes)

The description of anyone who is true to themself (3,272 positive votes)

Yes, it’s Urban Dictionary, but Urban Dictionary is not the only place this idea surfaces. A Buzzfeed video uploaded by Ashly Perez shows women stating that pretty is about “validation” from society, it is taught to young girls, and it is constructed by the media. I’m sure most feminists wouldn’t disagree. However, the video continues to say that beauty is different. “It is something that comes from the inside out: a combination of who I am and what I bring to the table”, one woman says. “I feel most beautiful when I’m using my mind and when I’m around my friends,” another adds. Beauty is made to mean personality. Perhaps this is why Dove’s latest marketing campaign makes women choose to label themselves as either “beautiful” or “average”—not average-looking. Perhaps Dove’s intention is to say that if your personality or capabilities are above average, you are beautiful.

However, beautiful already has a meaning and that meaning can’t simply be erased. It refers primarily to appearance, not identity. The number one definition in the Oxford Dictionary is: “Pleasing the senses or mind aesthetically”. Merriam Webster’s top definition is: “The quality of being physically attractive”. If these definitions were not true, and beauty instead referred to a person’s personality, then the trope beauty is bad wouldn’t exist and men could be called beautiful. Yet Cersei Lannister’s greatest weapon remains her beauty while calling a man beautiful remains an insult.

So Dove’s video, no matter what the intentions are, cannot tell women that if they are above average they are beautiful. Beautiful will not allow itself to be used that way; its meaning of ‘physically attractive’ always twists the message. Dove’s video actually tells women that if they are not beautiful, they are average: their intelligence, their capabilities, and their personality are not as relevant to their identity than their appearance. This video is more problematic than empowering. Buzzfeed’s video links being beautiful to being liked and loved, and while by “beautiful” Buzzfeed means being happy and sociable, we know that being physically attractive really does mean being more loved. Again, using the word beautiful subverts Buzzfeed’s message.

In fact, even if we were able to somehow strip beautiful of its current definition and redefine it to refer to a person’s attitudes and likeability instead of their appearance, that would damage the progress that intersectional feminism has already made. As discussed, beauty’s definition is under contention, and the meaning is slowly broadening. This is too important an accomplishment to discard. Beauty as appearance is a mainstream acknowledgement of visibility and measurement of value. To acknowledge that women of colour, trans women, disabled women, and less wealthy women are beautiful is to say that society considers them equal in appearance to white, able-bodied, cis, affluent women. Beauty meaning identity, on the other hand, does not do this. Stating that the category of beautiful that women have struggled to be included in still does not mean they are considered capable of being physically attractive by mainstream society, but that it’s irrelevant because their friends like them, is a regression.

Buzzfeed’s argument that women should be encouraged to measure their worth by more than their appearance is admirable. Dove’s advocacy of self-confidence is also applaudable. Yet beautiful is the wrong word to adopt to signify a person’s value and self-confidence; it is already laden with too much meaning.

After studying English Language and Literature at King’s College London, Tanya Newton moved to Japan where she teaches English. She loves to read and write, and loves tea almost as much. She is strongly interested in cultures and social structures. (Bio credit: Darrow)

This article was originally published on Darrow. Read the original article.