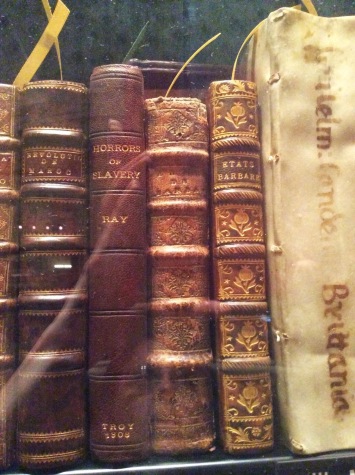 Throughout my history of ideas travel series following Thomas Jefferson, slavery was on my mind a lot: the institution as a whole, and Jefferson’s relationship to it. I was reminded of it constantly: by an original book from his own collection titled ‘The Horrors of Slavery’ now in the Library of Congress, which also displays a slave sale contract between himself and James Madison from 1809; the slave quarters and artifacts at Monticello; museum displays and plaques in D.C., Williamsburg, and Philly; and signs telling the story of his brief but telling correspondence with Benjamin Banneker.

As every student of American history learns early on, Jefferson’s words in the Declaration of Independence and his stated beliefs contrast sharply with his life as a slaveowner. And nearly every place I find something written about Jefferson, this contradiction is addressed but never really resolved.

Jefferson was in favor of the abolition of slavery early in his career as a lawyer and member of Virginia’s House of Burgesses. Having made little headway in the antislavery cause as a younger statesman, he rather abruptly gave up the fight in the 1790’s, proclaiming it unwinnable in his generation. While he continued to argue now and again that slavery was a moral and political evil, he chose to continue the expensive lifestyle of traveling, entertaining, building, and collecting fine wine, books, and art that he loved. This kept him in debt, so he funded it all the the familiar way: he remained a slaveowner for the rest of his life.

When I was in Philadelphia’s Old City, I visited the site of the President’s House and read the posted stories of the enslaved people who lived and worked there during George Washington’s tenure. As I read, I thought of how often I’d heard and read excuses made for Jefferson, Washington, and their fellow slaveowners, another common theme I encountered throughout my trip. Some sought to minimize their moral responsibility for slaveowning on the grounds they were ‘stuck’ in the institution already so they just had to ‘make the best of it’; others claimed that many were actually working on the problem in their own way but had to go slowly because of how entrenched the institution was, and so on. The most common excuse I encountered was that they weren’t really all that bad as slaveowners; in fact, they were benevolent because ‘they treated their slaves so well’, and their slaves were really better off than many free people of the laboring classes.

These ring hollow to me: they all sound like pretty lame attempts to make sense to ourselves of our history as self-professed champions of liberty who have simultaneously oppressed racial, ethnic, and ideological minorities throughout our history. I had read accounts before of Jefferson’s, Washington’s, and others’ so-called benevolent brands of slaveowning, but when I look around at these artifacts and displays, I really can’t see how true benevolence can ever coincide with that institution. As Jefferson himself wrote in his Notes on Virginia, ‘The whole commerce between master and slave is a perpetual exercise of the most boisterous passions, the most unremitting despotism on the one part, and degrading submissions on the other. Our children see this, and learn to imitate it.’

The real answer to that conundrum is: it never made sense, and it never will. Jefferson knew it, evident not only in his embarrassed response to Benjamin Banneker, he said so over and over again, explicitly in some cases, between the lines in others. George Washington knew it too, as evidenced by his changing attitudes on slavery; indeed, all of our nation’s founding generation knew it. 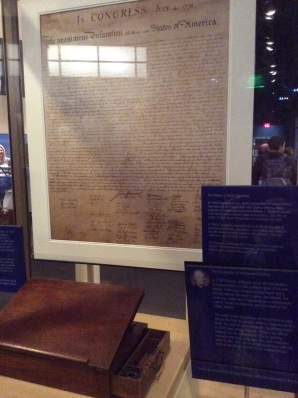 That’s why they fought over the words of the Declaration of Independence, especially the original draft which more plainly revealed the stark contradiction between the colonies’ demand for liberty for themselves while they remained enslavers of others. That’s why they fought over slavery again during the Constitutional Convention and how that weird three-fifths clause got in, because they couldn’t solve the problem of how slaves could be persons deserving representation while neither free nor citizens. That’s why debates over how to treat black Revolutionary war veterans were never satisfactorily resolved, why the John Brown plot happened, why the Missouri Compromise and the Dred Scott decision and the Civil War and the Plessy vs Ferguson decision and the 1963 firehosing of the Baltimore Children’s Crusade and the Baptist Church bombing and the riots in Baltimore in 1968 and again this spring happened, and so on and so on.

The only excuse I’ve heard in defense of slaveowners like Jefferson and Washington that makes a particle of sense on the face of it is that freed slaves would likely have a worse time of it on their own than they might have under their protection. Free black people often did suffer terrible mistreatment, including terrible wages, racist criminal codes, segregation, kidnapping, and re-enslavement; freed slaves often had to choose between living where they had few prospects and leaving their still enslaved loved ones behind. Therefore, the argument goes, the attempts of some conscience-stricken slaveowners to keep their slaves while treating them more humanely were really quite benevolent.

While there’s evidence indicating some good intentions on the part of some slaveowners, this argument just doesn’t hold up that well either when examined in the full light of history. To his credit, Washington kept more slaves on his plantation than was financially healthy for him so that families would not have to be split up, and tried to work out a way to eventually emancipate all of them with some financial provisions. Jefferson was squeamish about allowing slaves to be beaten in front of him and rarely allowed it, and paid many of them bonuses for good work. It seems on the whole, Washington has a far better record when it comes to gentler treatment and concern for the slaves’ own interests, and he freed all of them in his will though he couldn’t bring himself to do it during own his lifetime. It turns out there’s plenty of evidence Jefferson often had others whip his slaves when he wasn’t there to see it, especially when the profits from his nail business dropped off. And Jefferson’s habit of accruing large debts by his habit of living far beyond his means caused almost all of his slaves to all be sold at his death, and many slave families to be broken up, parents, children, brothers and sisters, wives and husbands torn away from one another.

And many freed slaves actually did do quite well for themselves, or at least as well as they might have otherwise. Plenty of other plantation owners freed their slaves, and many free black people did very well for themselves in the North, West, and even in some areas of the South. Jefferson and Washington could also have allowed their slaves to make the choice for themselves whether or not they wanted to remain under their protection. They had both (Jefferson earlier in life, Washington later) come to the firm conclusion that slavery was morally wrong. They just couldn’t bring themselves to make the hard choices and personal sacrifice to fully act on their convictions. 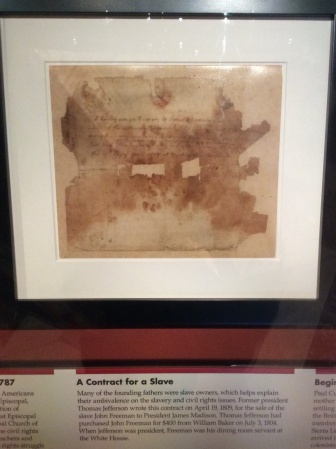 So it’s not that, as the cliche goes, that we’re judging Jefferson, Washington, and other slaveowners by the standards of our own time, not theirs. Here’s what makes it all the more painful and injurious to our American self-image as bearers of the standard of liberty: we’re judging these Founding Fathers by their own standards, and by the standards of others in their own time, those principled lovers of freedom who did free their slaves, who decided to do the difficult but the right thing, according to the principles of the Declaration and those Washington professed later in life.

As to the issue of ‘treating their slaves so well’: consider what really went into keeping people enslaved besides whippings.

Slaves were denied the chance to make their own decisions and to enjoy the full range of human relationships that free and happy people need. The marriages of slaves were not held sacred by their masters and they could not enjoy the security of family bonds and affection. At any time, wife, husband, sister, brother, parent, and worst of all, children could be taken and sold elsewhere, never to be seen again. This happened all the time, since there was no plantation large enough to hold exponentially increasing slave families. They were provided no incentive to enjoy fulfilling occupations, since they are denied the fruits of their labor, they had a narrow field of roles to choose from or none at all (surely noone chose to be a field hand!) and there was not much personal reward for a job well done. They could be and very often were whipped, denied food and other necessities, and otherwise punished for any infraction, despite wishful hypotheses that slaves were too financially valuable to be treated badly. (Sorry, Pollyannas, history’s not on your side). They often were treated harshly even if the plantation owner didn’t desire or order it because slaveowners relied on their overseers, which they couldn’t watch most of the time, to get results.

And worst of all, because it left slaves most vulnerable to every sort of oppression and robbed them of great solace, slaves were denied education, especially higher education. Enforced ignorance was one of the surest ways to keep slaves from plotting escapes and revolts, to keep them from learning about the wider world they could wish to be a part of, from learning moral and religious arguments against slavery, and from the prospect of a good job if they ran away. 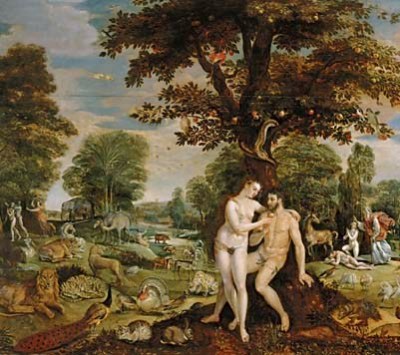 The Bible was often used to justify slavery: there are many instances of slavery in the Old Testament that Yahweh seems perfectly comfortable with, and Paul advises slaves to be obedient to their masters and to return to them if they ran away. Paul does say you should be nice to your slaves, but that’s the farthest his morals go in the matter. Like the myth of the Garden of Eden, Paul tries to instill in his readers a particular moral virtue. But if Jefferson, Washington, and their fellow slaveowners had read their Genesis a little more carefully, they might have discovered that there’s more there than a simple morality tale about obedience.A closer reading of the Garden of Eden story reveals a much deeper insight: human beings of spirit and will, of wit and intelligence, of curiosity and integrity always have, and always will, long for knowledge and self-determination. And they must and will have it, even if danger, privation, suffering, or destruction be the price.

2 thoughts on “Jefferson and Slavery”