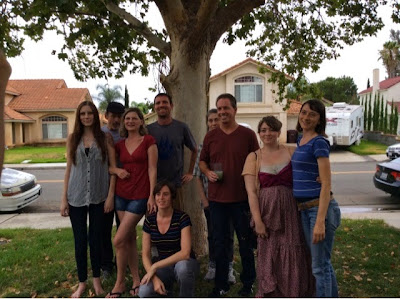 I belong to a large family. Like, very large. On my mom’s side, I am one among a pool of 18 first cousins, a number not too out of the ordinary, but last I heard, I am one of a whopping 70 or so cousins on my dad’s side (If that number is out of date, dear relation who may be reading this, let me know and I’ll update!) I have twenty-one (living) aunts and uncles, not including my dad and mom, and when it comes to my siblings’ and my cousins’ kids, their spouses, the great aunts and uncles and their families… you can imagine the sheer numbers of people I count among my relations.

And yet, I actually do know a substantial majority of them, though not necessarily well. But a great many of them I do know well.

Here’s another thing: I am very different than many, probably even most, members of my family, in temperament, habits, and beliefs, as is the case with most extended families, I expect. I even find many of the beliefs and opinions held by some of my relations distasteful or sometimes even downright abhorrent, as I suspect they do mine.

Regardless of this, I love and respect almost all of them, and I really like to spend time with them when I can.

People sometimes find it necessary to distance themselves from family for their own protection, to preserve their mental health and peace of mind, for example, or because their family members’s beliefs cause them to reject their atheist, or gay, or interracially-married, or religiously converted, or otherwise non-conformist relations. Some people abuse their family members, too, sometimes in most horrific ways. Every situation is different, and of course, many people really should sever ties when the relationships they have to family is destructive.

But I think it’s so important to preserve family relations if you can, because what they have to offer can be of immeasurable value.

First, there’s the wealth of love and support that comes with family. You acquire a posse of friends and allies just through the simple fact of being born. And as you go through life, you grow together with them, and get to share in their history, in a way unique from any other kind of relationship. A member of your family can understand you in a particular way that few others can, by virtue of each of you accompanying another as each grow and change. You, in turn, can have that particularly intimate sort of insight into what makes them tick.

But secondly, and I think at least as importantly, you have the opportunity to keep your mind that much more able to imagine and to understand other ways of seeing the world. For example, here in the Bay Area where I’ve made my home for well over a decade now, I live in a liberal, artsy, worldly, well-read, foodie, moderately out-doorsy, rather cosmopolitan ‘bubble’. My friends would all be readily characterized as such, and I love these things about them, as we share so many points of view in common, and enjoy doing and talking about the same sorts of things.

But there are other ways of experiencing the world,  and as we share our city, state, country, and planet, and therefore in many ways our fate with very different kinds of people, it’s imperative that we all be able to talk to each other. But how to do overcome these often vast differences, and bridge that gap, in order to be able to understand how others think? This problem is illustrated most strikingly in our public discourse, where in the media and on internet forums, citizens, pundits, and politicians shout past each other, and instead of convincing their ideological opponents, almost always just end up ‘singing to the choir’.

And that’s where the bonds of family loyalty and shared history can come in, to help you increase your patience and expand your understanding. Family is one of the few spheres where very different people can come together in mutual love and respect, overcoming their differences in order to preserve something even more important than simply agreeing with one another about everything.

I consider my dad, for example, the most important moral influence in my life, though the few times we’ve specifically talked about the issue, we find we have very different accounts about the nature and origin of morality. Yet, I find he embodies that which morality ultimately is for, and how it molds a genuinely, habitually virtuous person that I would recommend everyone emulate and admire.

Another example: one of my uncles, dear that he is, calls me regularly in an effort to convert me back to the Catholic religion of my upbringing. (He was my confirmation sponsor, a Catholic rite of passage somewhat like a Bat Mitzvah, and he takes it very seriously, though I’ve assured him time and again that I consider him released from that obligation: I was far too young, and lacked the relevant information, to make such a vow of fealty to any religion.) We end up having many frank, lengthy discussions and debates on all manner of religious, philosophical, and political topics, and rarely agree on anything beyond the most basic moral principles and standards of reason. But we end every conversation, no matter how heated it had gotten, on the friendliest of terms, and say good-bye amidst good-humored banter.

Most of the time, it feels as if there’s just not enough time and energy to go around spending a lot of time with people that don’t share many of your interests and beliefs. But without family, it’s unlikely that many of us would have the opportunity to really get to know people that are substantially different than we are. I’ve spent countless happy and enriching hours in friendly companionship eating, hiking, swimming, playing sports and games, and just chatting with relatives with whom I have few things even common, who disagree with me philosophically, politically, and aesthetically about so many things, and I with them. But ultimately, none of that mattered at the time: we were sharing time as fellow beings sharing a kind of close human relationship that could transcend all of that.

Funnily enough, that same family loyalty that historically has led so so much tribalism and in-group, insular thinking, can also be among the most important avenues for opening us up to a more tolerant, cosmopolitan mindset, so long as we have family that are open to maintaining a system of love and support while being very different in habit and thought. So if you can, stay close to family, keep the lines of communication open. You may very well become a much bigger person as a result.

My family has done so much for me in that line, even if unintentionally, and for that, among so many other things, I thank them, and owe them a great debt.