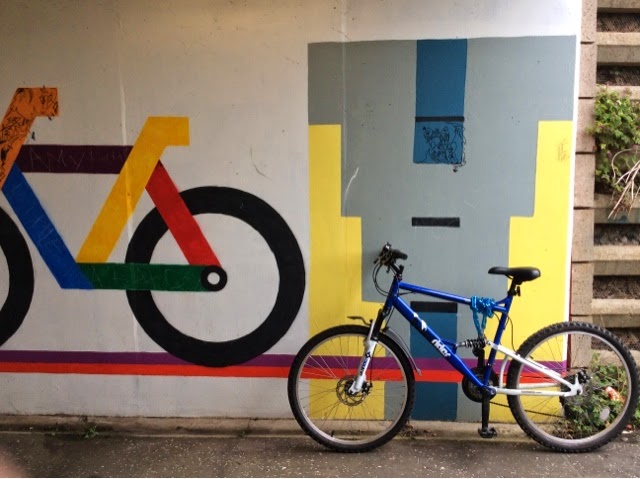 Hope you don’t mind the departure.

So today I finally had access to a bike, though I don’t think you, Bryan, my dear husband and resident bike mechanic extraordinaire, would approve of it.
It was abandoned at my hosts’ place by a former guest who couldn’t take it with them. And no wonder. The goddamn thing weighs about a hundred pounds. Adam (of the couple I’m renting a room from, nicest guy you’ll ever meet, as is his lady, Krystallenia) did fix it up a bit, but I discovered issues with it while riding. For one thing, the seat was way too low, I felt like I was riding a little clown bike (made of lead), and my knees started to ache fast.

But I was cheered at the prospect of exploring Edinburgh’s awesome hub of dedicated cycling/pedestrian paths (greenways), converted defunct tram lines, so I made the best of it. 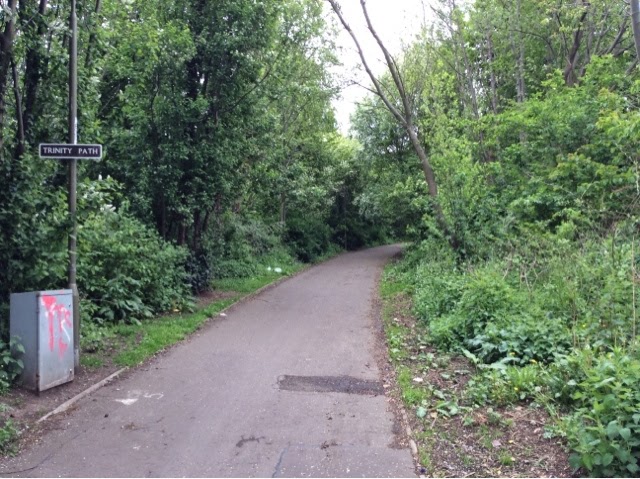 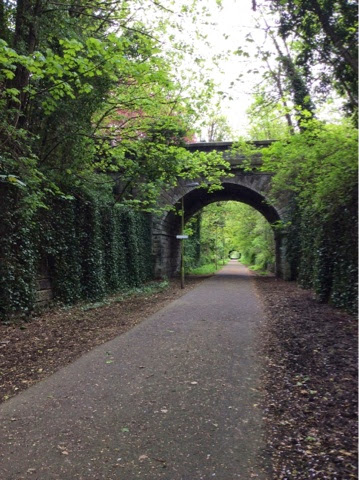 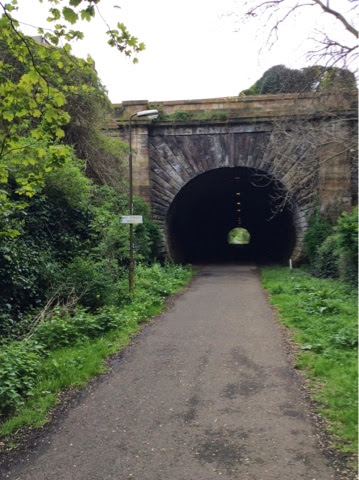 Not too shabby! So I meandered through these bike paths, and while I had a general idea where I was going, a kind man soon disabused me of that notion. He could see my eyes glaze over as he tried to explain how the spiderweb of paths would lead me to where I was eventually headed, so he offered to accompany me. He pointed out (as I had realized) that the downside to the lush greenery that surrounded the paths was that you were completely shielded from seeing any landmark that could indicate where you’re going.His name is Adrian, a family practitioner, and he’s getting back into shape from being off the bike for three years. On his last cycling holiday in the Pyrenees, he fell and broke his neck. He’s okay now, he reassured me. We exchanged travel tips: he’s about to travel to the US with his wife and teenage daughters to see the usual beauty spots, the Grand Canyon, Bryce Canyon, Zion, and so forth.

When we reached the end of the bike maze, we parted, after he showed me where a bike co-op shop was, who might do quick repair. The other major issue I had discovered: the handlebar stem as not firmly bolted down, and would slip off to one side whenever I’d stop, then push off to start again. A sweetheart named Dougie (or Duggie?) raised the seat and tightened down the handlebars for me, after grumbling over the bike a bit (I apologized for asking him to work on such a shitty bike, and he grumbled, kindly, that it came from a ‘car shop, not a bike shop’). He refused to take any payment at all. 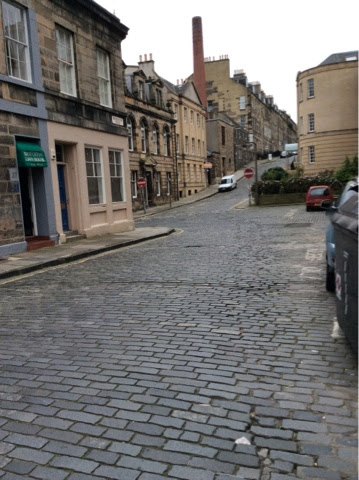 I continued on my way, through a maze of little windy, hilly, cobblestone streets. Would have been impossible without the handlebar repair.

When I neared Calton Hill, I turned towards Arthur’s Seat, which I had seen from my explorations on my first day there. Here it is, seen from the hill that day: 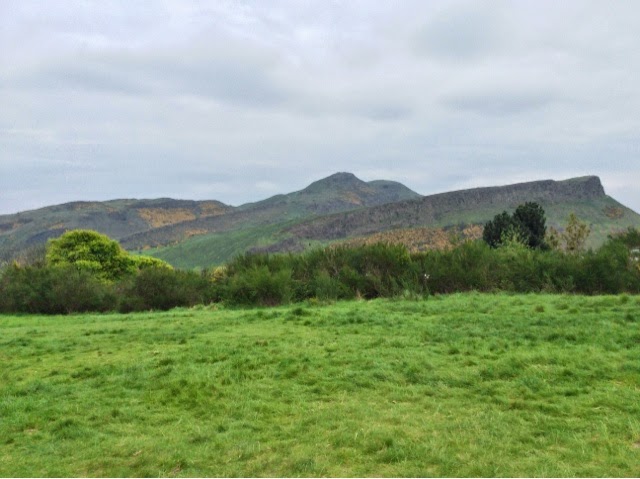 And here it is as I start the ascent: 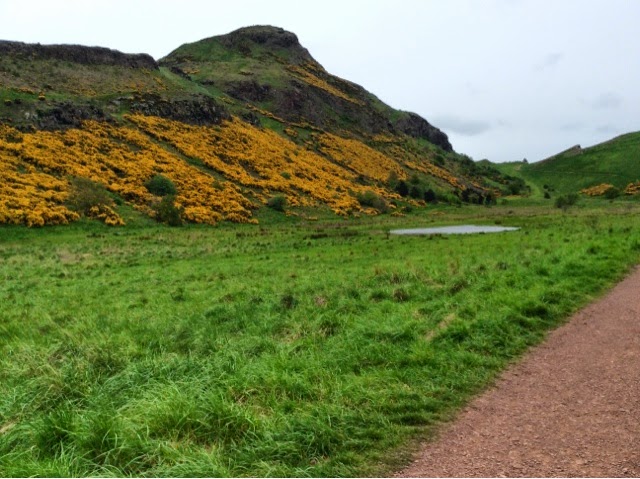 It’s so beautiful, and has a wonderfully wild feel to it, for a place right next to the city 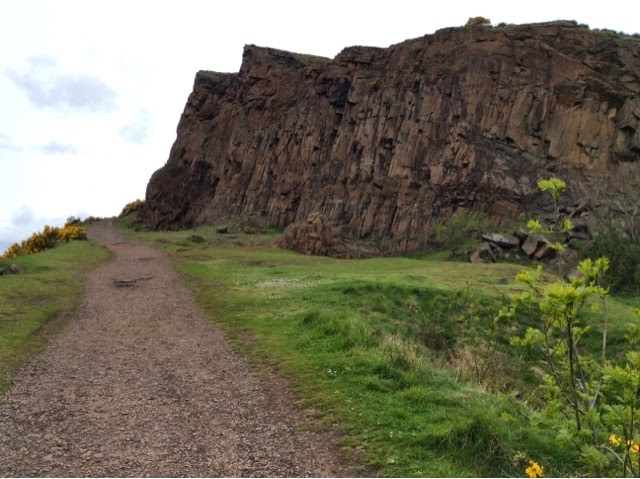 It was hard to stop stopping to take pictures, every bend in the path revealed a scene more enchanting than the last.

So at the summit, I stopped to eat lunch, as it started to sprinkle. There was, like, twenty weathers that day. But I dressed as a San Franciscan in spring, so I was set. 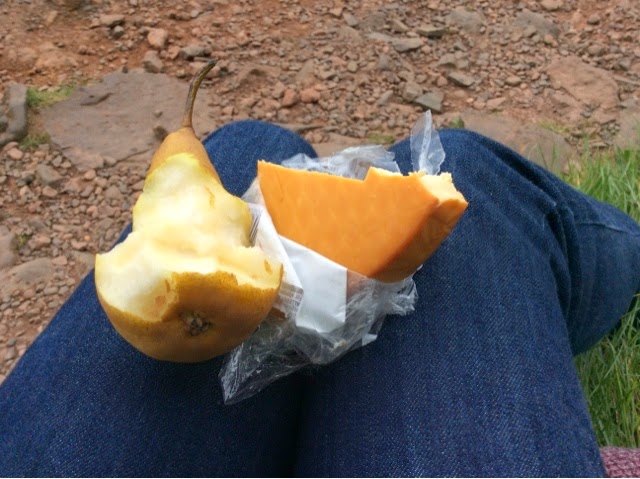 Smoked German cheese and a pear

If you want to keep warm on a ‘driech’ day (thanks for the cool new addition to my vocabulary, Jackie!), ride up Arthur’s Seat on a two-hundred pound bicycle (yes, it got heavier). I don’t think it really was kosher to take my bike up, but the signs didn’t specifically say not too, so I did. You would have been proud of me, Bryan, there was definitely some ‘gnar’. I was roasting by the time I reached the top. 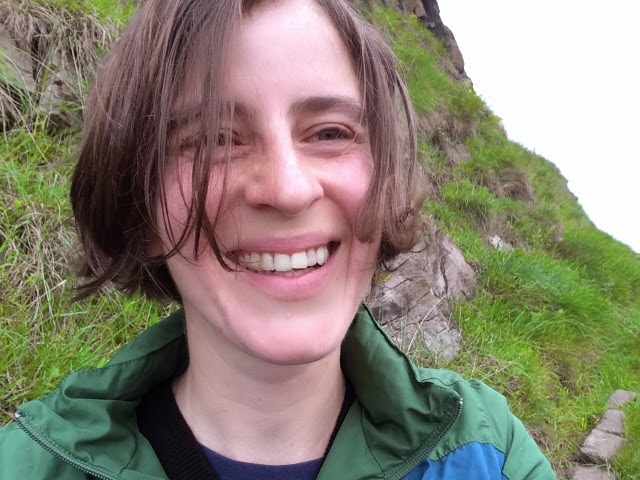 So I went down, and spent the rest of the day half biking, half sightseeing by foot.
On the way back (I couldn’t linger ’till dark cause I had no lights, I went by way of Dean Village, which drops below the Dean Bridge and along Leith Waterway. 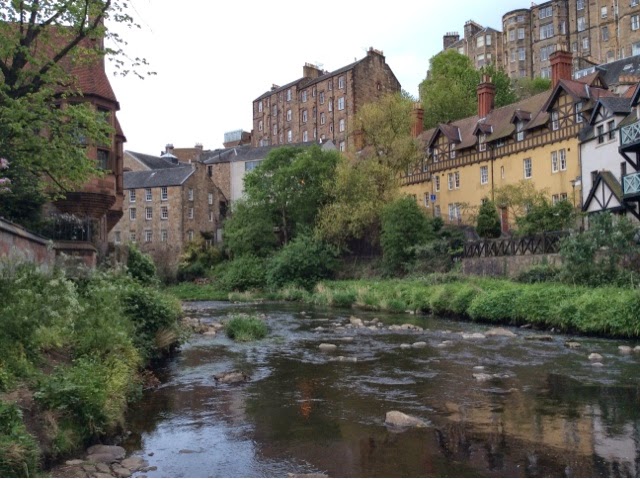 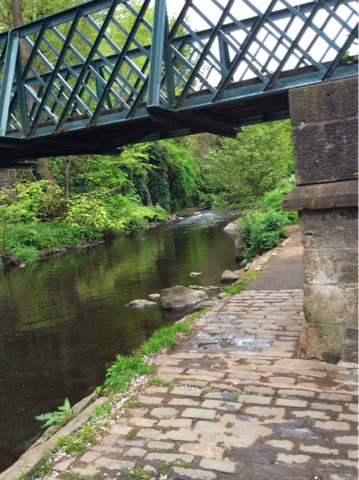 And finally, I reached my temporary home, to this sky 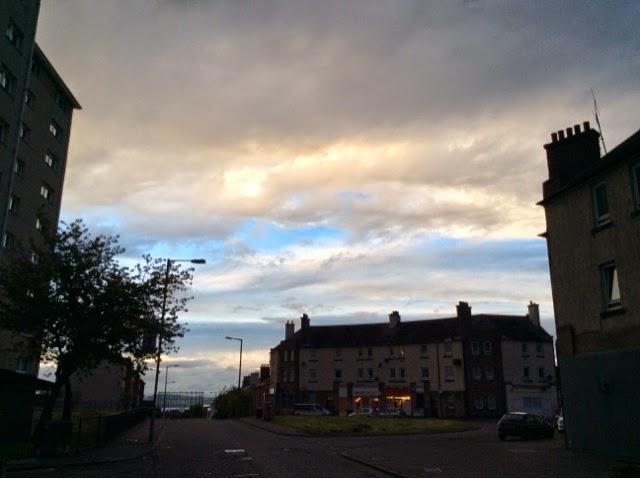 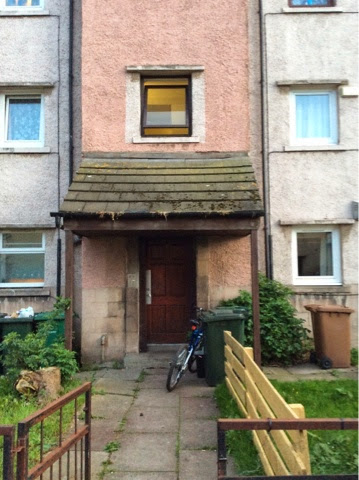 It was a good day. David Hume’s birthday! Yet I was the one that got the gift. Adam made scones and tea, and before bed he and I, and eventually Krystallenia when she came home from work, talked about Poland where he’s from, Greece where she’s from, and the US.