…or more accurately this time, Hume sites and artifacts.

On Thursday afternoons, the Scottish Historic Buildings Trust holds an open house for Riddle’s Court (a small square enclosed by the buildings that surround it), where David Hume bought his first house in the 1750’s. In his time, the building was called a ‘land’, and a floor or suite of the building that comprised the rooms where the tenant lived was called a ‘house’. So a ‘land’ held several ‘houses’, today’s ‘flats’.

The rooms that are open to the public are on the opposite side of the court from where his house was; records are not clear from the time, but it’s pretty certain he lived in one of the upper houses on the Royal Mile side of the court. I’ll show you where in a moment.

This room with the beautiful ceiling was a drawing room for later inhabitants. You can read about it in the center photo below. The closeup of the ceiling shows David Hume’s monogram, to commemorate his living nearby.

Here (above) are views looking upwards from inside the court; the reddish color of the walls at the right is a natural color that they would have used at the time, and he probably lived in one of these upper houses. The photo on the left is at the left of the reddish wall, and I include it ’cause it’s pretty! 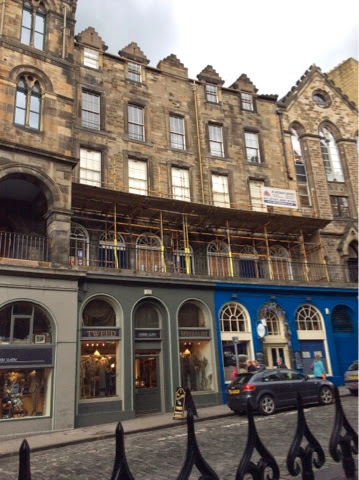 And here’s the view of the building that I’m in, opposite from Hume’s house, from Victoria Street below. Victoria Street was built in the 1830’s, where a steep, narrow footpath used to run through the gardens behind Riddle’s Court and the neighboring houses. My mother-in-law recommended that I visit Victoria Street; coincidentally, I discover that in constructing it, they almost decided to tear down the Riddle’s Court buildings, one of the most important sites I’ve come to visit. Fortunately, someone decided it was best to keep them since the buildings have such a rich history and Patrick Geddes, who was responsible for saving and restoring so many of Edinburgh’s most important historical buildings, turned it into a student center. 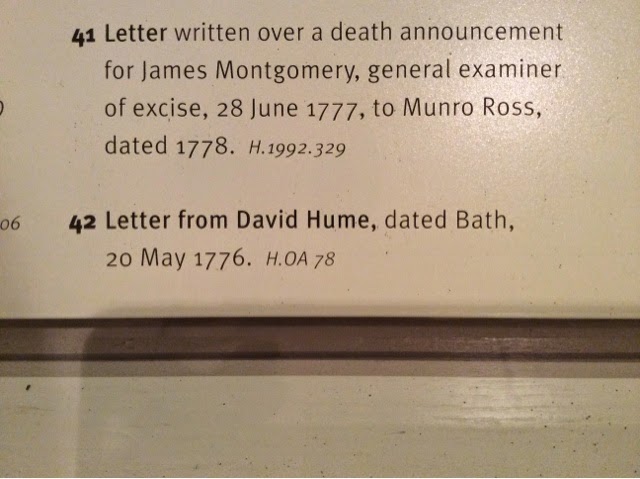 Now I turn to the first artifact I find on this trip that David Hume himself touched: a letter written just a few months before his death. It’s on display at the National Museum of Scotland, where I spend some hours this afternoon gazing at wonderful natural specimens and historical artifacts of Scotland. Hume had gone to Bath in hopes that the mineral springs there would help relieve the symptoms of the intestinal or abdominal disorder, probably cancer, that he died from. In the letter, he’s telling a man named Andrew that he’s feeling better at the moment.

A letter from David Hume to ‘Andrew’ dated May 20th 1776, at an exhibit in the National Museum of Scotland in Edinburgh

Note: The following story has an update.

The next day, I set out to find the commemorative plaque at the site where David Hume’s New Town house (apartment) was at 8 South St. David’s St. at Rose. I can’t find the plaque anywhere, but his house may have stood about where this large department store stands now….

I return to the National Library of Scotland to catch up on my writing and research, and there’s another letter in Hume’s own hand on display just feet away from where I’m writing this post, at an exhibition celebrating the achievements of the Scots people.

David Hume worked for some years in the 1750’s as the librarian for the Advocate’s Library, which eventually became the National Library. Although he had a falling out with the library over their blocking of some ‘undesirable’ books he had ordered, he continued to work for them since he needed access to their collection for the ambitious, multi-volume History of Britain he was working on, for which he was most famous during his lifetime. He donated the small salary that he earned from the Library to a blind poet friend, Thomas Blacklock.

Throughout my trip, I’ve been working intermittently in the Special Collections reading room at the National Library of Scotland, referring to first editions of David Hume’s books, all published in his lifetime, save for a few ‘dangerous’ works that were published shortly after his death. I’m not allowed to take photos of them, but you’ll find them described in my various Hume essays written during and following this trip, in the section that follows each essay, called ‘Sources and Inspiration’ (my informal brand of works cited page that I use for my blog essays). When I’m back home and have more time and my own computer, I’ll look for more information on these books, with links and photos.

Letter from David Hume to James Balfour dated Mar 15, 1753 on exhibit at the National Library of Scotland

The library is closing, so I must go. More on Hume to come!