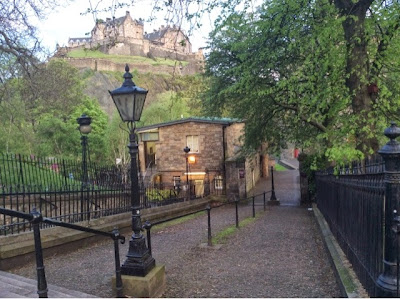 There’s this great little addendum to an edition of Hume’s Political Discourses, a first edition printed in Edinburgh by R. Fleming in 1752, called Scotticisms, that I came across in my research.

It ‘translates’ and compares phrases in Scotch to their corresponding phrases in English (English spoken in London and by academics, I suppose). David Hume was among the Scottish authors of his time who tried to make his writing more accessible to a wider British and European audience, who often had difficulty understanding Scotch. So he made of habit of using the English phrases and/or including a glossary like this one.

Interestingly, there’s a surprising number of cases where the Scotch phrases are the same as we use in the US today, while the English version has died out. Makes sense, I guess, since we have had such a large Scotch-Irish population throughout our history, but I would have thought the English influence would have been even more pervasive at the time, through governance, literature and commerce. Overall, more of the English versions persisted here, but not many more, and those seem to be the more common phrases or single words. Of course, being that this list is from so long ago, even more of the phrases in both have fallen out of use entirely, at least in the US.

Here are some examples, with the Scotch first, and the English second

– conform to / conformable to
– friends and acquaintances / friends and acquaintance
– incarcerate / imprison
– tear to pieces / tear in pieces
– in the long run / at long run
– out of hand / presently
– a park / an enclosure
– ’tis a question if / ’tis a question whether (of course we say ‘it’s’ instead of ‘ ’tis’ )
– nothing else / no other thing
– there, where / thither, whither
– compete / enter into competition
– a chimney / a grate
– deduce / deduct

There are some cases where I wish we kept the Scotch version, more fun, though we use the English, or something closer to it

– notour / notorious
– to be difficulted / to be puzzled
– dubiety / doubtfulness
– superplus / surplus
– yesternight / last night
– to extinguish an obligation / to cancel an obligation
– to condescend upon / to specify (is this indicative of pride to easily wounded, where even to give details is offensive?)
– butter and bread / bread and butter (different priorities, I suppose!)