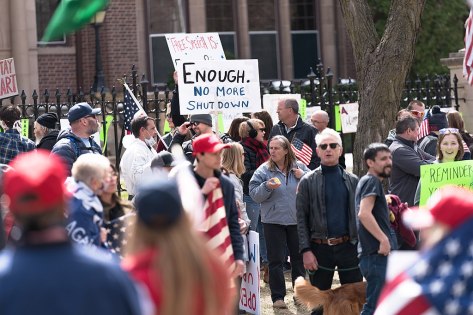 Protests which have recently arisen in parts of the United States and Brazil claim that economic disruption caused by lockdowns imposed to halt the spread of SARS-CoV-2 are more dangerous than Covid-19, the disease caused by the novel coronavirus. Protestors in the United States, in public spaces and online, also argue that the lockdowns consist of unconstitutional violations on personal rights to move freely, to assemble, and to work, and that Covid-19 is not very deadly anyway. These protests are often joined by those who trumpet conspiracy theories. One is that the billionaire philanthropist Bill Gates helped create SARS-CoV-2 so that he could sell vaccines and/or implant subcutaneous dyes or capsules to track and spy on the world’s population. Another that all lockdowns are really seized opportunities by those who wish to turn their governments into massive, all-powerful police states.

The latter claim embraces and expands an element of fear shared by many on the left, right, and center. China’s stringent lockdown of Hubei province, which includes Wuhan – the city where the virus originated – appeared to many to be overly invasive, exemplary of authoritarian forms of government and, therefore, not to be replicated in free societies. Viktor Orbán and his government, through the Hungarian Parliament which they control, took advantage of the emergency to seize the power to ‘cancel all elections, suspend its own ability to legislate, and give the prime minister the right to rule by decree—indefinitely,’ as Anne Applebaum writes.

Fears that the lockdowns might lead to the erosion of civil liberties are not entirely misguided, even if overblown. Many democratic societies, such as South Korea and Taiwan, have instituted robust virus control policies which included contract tracing, targeted shutdowns, and quarantines without eroding overall civil rights or arbitrarily expanding government power. Not only have such policies been highly effective, they made total lockdowns unnecessary; because of them, relatively few have thus far had their rights to move freely, assemble, and work curtailed. The United States has long – since shortly after its founding, in fact – imposed restrictions on movement, assembly, and speech, and compelled citizens to take certain actions, during wars and public health crises without becoming an Orbánian- or Chinese Communist Party-style authoritarian regime, whatever extremists on the left or right would argue.

World leaders and heads of state and local governments acknowledge, as common sense indicates, that lockdowns cannot continue indefinitely: as members of a social species, most people need regular contact with others to maintain their mental health; most people need to get back to work to support themselves and their families; governments need tax revenue to maintain social welfare and defense systems, essential infrastructure needs workers and funds to maintain it; dental care, elective surgeries, and other deferred healthcare must be resumed before overall health deteriorates; and so on. The debate is not over whether lockdowns will be eased and lifted, but when and how, while minimizing suffering and death as much as possible along the way.

The debate is complicated by the fact that so little is still known about actual infection rates; how many people carry the virus without falling ill of Covid-19; actual death rates; and how these rates might change without nonmedical interventions such as lockdowns, quarantines, and voluntary and enforced social distancing. Early results seem to indicate what many have long suspected: the rates of all of these are significantly higher than official tallies indicate. A recent study at Stanford University, based on results from a new antibody test, indicate that far more people have been exposed to the virus, which, if so, may indicate that the death rate is far lower than initial estimates indicated. However, initial takeaways from the as-yet-not peer-reviewed study may be deeply flawed since it was not randomized, relied on a test whose accuracy is questionable, and cannot yet take into account actual rather than reported death rates since actual rates are still unknown. Some countries and municipalities which publish mortality figures without long lag times show large spikes in general mortality rates unaccounted for by confirmed Covid-19 deaths. This helps explain why so many places throughout the world are experiencing such dire situations as hospitals, morgues, crematories, and cemeteries are unable to keep pace with its ravages.

It is telling that countries and localities that have experienced the worst of the virus thus far are not reporting the kinds of anti-lockdown protests that are occurring elsewhere. Hard-hit western Europe and New York State, for example, know what it is to suffer mass casualties, and those who live in those places who would prefer to see the virus run its course in hopes to attain herd immunity – a still theoretical goal since we still know so little about how the virus affects those exposed to it, and those who have not yet – appear to be few and far between.

For those who insist that the lockdown cure is worse than the disease, they need to be honest about the risks and our still profound ignorance about how the virus affects people and how it might do if left to run through the population unchecked, or mitigated only by voluntary or limited measures. They need to acknowledge that the evidence regarding the mortality rate is still mixed; that even if the percentage of people who suffer and die from the virus is relatively small, the total number of casualties may still be unacceptably high if the majority of the population catches the virus; and that many who survive infection still suffer greatly from it, including damage to kidney, heart, vascular system, digestive system, and brain.

They need to understand that such arguments as ‘just because people die with Covid-19 doesn’t mean they die of Covid-19′ – another one I have frequently encountered on social media – are disingenuous and dangerous. They are disingenuous because people are routinely killed by disease or accident which is listed as the primary cause of death though they had another ongoing health issue. A person might have a suppressed immune system because of a condition or medication following a transplant or cancer, but their primary cause of death might still be Covid-19. Even if such a person caught the virus more easily or suffered worse effects from it than they might have otherwise, if they hadn’t caught it, they’d still be alive. The same goes for people who routinely live for years or decades with high blood pressure, obesity, heart or lung ailments, clotting disorders, old age, or other risk factors or disease. To argue that people with comorbidities did not really die of Covid-19, or that the virus merely hastened their inevitable deaths, is dangerous because it implies that the preservation of life in the face of disease or injury is itself pointless and unnecessary. Those who died of Covid-19 who had other risk factors – well, their deaths don’t count. Brush them under the rug.

In sum: when making an argument to extend or to lift lockdowns, be honest about what you’re arguing. If you’re arguing to extend the lockdown, acknowledge the side effects to physical and mental health, and to overall material and financial well-being. If you’re arguing to end the lockdown, don’t pretend that we know more than we do about the potential consequences, or pretend Covid-19 is not really such a big deal. No time is the time for lies, obfuscation, conspiracy theories, or hyperbole, but this is especially not it.