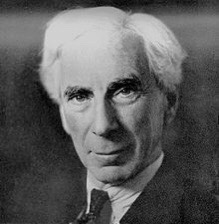 Encyclopedia Britannica introduces him thusly: ‘Bertrand Russell ….born May 18, 1872, Trelleck, Monmouthshire, Wales- died Feb. 2, 1970, Penrhyndeudraeth, Merioneth, [was a] British philosopher, logician, and social reformer, founding figure in the analytic movement in Anglo-American philosophy, and recipient of the Nobel Prize for Literature in 1950. Russell’s contributions to logic, epistemology, and the philosophy of mathematics established him as one of the foremost philosophers of the 20th century. To the general public, however, he was best known as a campaigner for peace and as a popular writer on social, political, and moral subjects. During a long, productive, and often turbulent life, he published more than 70 books and about 2,000 articles, married four times, became involved in innumerable public controversies, and was honoured and reviled in almost equal measure throughout the world…’

For myself, he was particularly influential to my younger freethinking self, disenchanted with the religion of my youth and seeking new and more satisfying ways of viewing the world. I read his History of Western Philosophy and Why I Am Not a Christian each several times over. I admire his clear, precise thinking and his principled anti-war stance which came at a significant cost, including jail time and loss of a prestigious job at the University of Chicago, and it’s always so enjoyable to watch him speak (you’ll find plenty of videos on YouTube) in his oh-so-aristocratic accent with a pipe often tucked into the corner of his mouth. He was not a perfect man, but he was never a less-than-fascinating one. 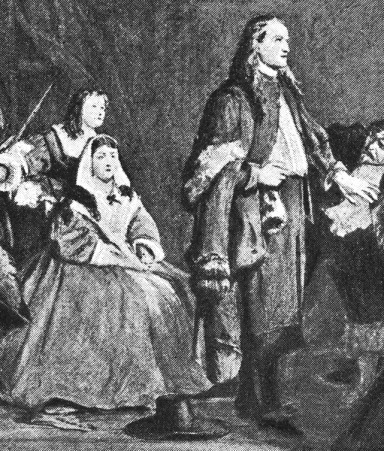 Margaret Fell with George Fox before the judges, from a painting by J. Pettie, 1663

Margaret Fell was born on some unknown date in 1614, so let’s take this occasion to remember her on the date of her death, April 23rd, 1702.

Fell’s lived a life as passionate as it was long. She was an unconventional thinker for her time, a zealous and progressive religious activist at times imprisoned for her beliefs, a prolific writer, well-traveled, a mother of eight children and a wife twice.

An early adherent and eloquent promoter of Quakerism, Fell is now considered one of its founders. She converted to Quakerism after hearing a sermon by one of its most charismatic preachers, George Fox, and almost immediately launched into a lifetime of hosting Quaker meetings and speaking out on behalf of her new religion. After her husband died some years later, Fell married Fox, probably more as a co-missionary than as a romantic partner since their work, travels, and imprisonments kept them apart for much of their marriage.

As I’ve had a lifelong fascination with the history of human rights, I’ve long admired the Quakers because, along with Unitarians and Deists, so many have been leaders in the struggle to expand, establish, and promote them. That’s because these faiths emphasize the importance of individual conscience, the primacy of the human mind, God’s rational nature, and the moral equality of all human beings.

Fell believed in the Quaker doctrine of the Inner Light which God has caused to shine equally in the hearts of all beings; all we need do is heed it. Therefore, one does not need ministers, priests, or any other authorities or intercessors to achieve salvation. And because God has created everyone for the same purpose and gave everyone that light, everyone is spiritually equal and capable of understanding and proclaiming the Truth. We can see how this doctrine, central to Quakerism, readily aligns with human rights movements centered on a belief human spiritual and intellectual equality. The right of women to speak in church and write religious texts, in her time limited to men, was a cause particularly dear to Fell’s heart. While Fell’s belief in the equality of women was limited to their role as spiritual beings, Quakerism tended to encourage ever-more progressive beliefs in its adherents. Over time, Quakers came to be leaders in the abolitionist and pacifist movements, promoting the right of all to receive equal and universal education and for women’s rights in social and political spheres as well.

In light of her achievements as a female religious pioneer, and the human rights advances facilitated by the Quaker faith she helped found, Fell’s contributions should continue to be remembered and celebrated.

Ordinary Philosophy and its Traveling Philosophy / History of Ideas series is a labor of love and is ad-free, supported by patrons and readers like you. Please offer your support today!